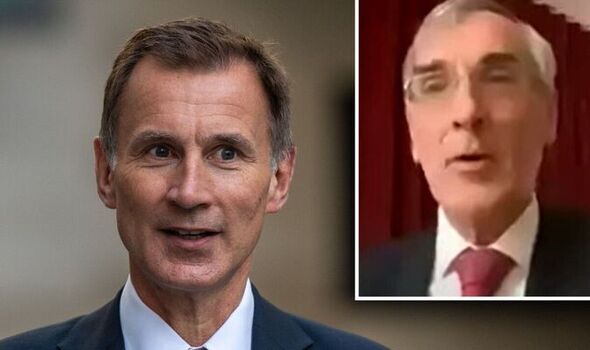 Jeremy Hunt has been warned against “taxing the UK to death”, as veteran Tory MP John Redwood urged the Government to “go for growth”. Speaking ahead of the Autumn Statement – taking place this morning – Mr Redwood called for the Treasury to “offset the coming recession” and “pull the levers in the right way”. The MP for Wokingham, a long-term advocate of tax cuts, said that the Government should be offering people “tax incentives”, rather than hiking tax rates and cutting public spending.

The Chancellor is expected to announce a number of tax rises as part of an attempt to fill a £50billion hole in the public finances.

Mr Hunt understood to be planning to implement an equal split of tax rises and spending cuts, which could translate into £25billion in hikes for taxpayers.

His plan for the economy will be unveiled at 11.30am today when he delivers his Autumn Statement to MPs in the House of Commons

Speaking to TalkTV, Mr Redwood said: “I do think we’ve got to go for growth.

“We’ve got to offset the coming recession, which is a western phenomenon – all the western economies made the same mistakes.

When asked if there is “only bad news coming”, the MP responded: “I hope the Autumn Statement is rather more cheerful than that.

“We do need to cheer the country up and go for growth.

He added: “What I am nervous about is that probably today will be concentrating on a black hole which will be there in three or five years’ time.

“The truth is that the OBR doesn’t know what the state of the deficit will be in five years’ time and nor does anyone else.”

Mr Redwood urged the Government to “pull the levers in the right way”, explaining: “The Bank of England has lurched from a far too easy policy – creating inflation – to a very tough policy, which will bring inflation down.

“I do actually believe the bank when it said inflation will be below two percent because its very tough medicine being administered.

“So the Government needs to be offsetting that, which is why it needs to go for growth in its Autumn Statement.

“Yes, it should reduce wasteful and needless expenditure, it needs to stop all these hotel bis and get on top of the border issues, it needs to get more people back to work – but it should not be taxing us to death.

“It needs to be offering people tax incentives and help.”