PHOENIX — At the Church of God of Prophecy, hundreds come each Sunday for two hours of worship in Spanish. They share passages from the Bible, sing and embrace each other tightly. The evangelical congregation, led for nearly 25 years by Pastor Jose Rivera, is nearly all Latino, the vast majority with roots in Mexico.

They are not unlike the people President Trump attempted to demonize from the outset of his first campaign, or all that different from those he is trying to keep out with his border wall and hard-line immigration policies.

But they do not agree on Mr. Trump — some see him as a savior, others as a predator. By Mr. Rivera’s estimate, somewhere between a quarter and a third of his congregants support Mr. Trump, a rate that is echoed in national polls.

When Pastor Rivera looks at his congregation of 200 families he sees a microcosm of the Latino vote in the United States: how complex it is, and how each party’s attempt to solidify crucial support can fall short. There are not clear ideological lines here between liberals and conservatives. People care about immigration, but are equally concerned about religious liberty and abortion.

To explain his own partisan affiliation, Mr. Rivera says he is “politically homeless.” He is uncomfortable with many positions embraced by Democrats but feels betrayed by Republicans, his party of choice for much of his life.

For decades, Hispanics have been viewed by both parties as a potentially crucial constituency up for grabs. In the wake of Mitt Romney’s loss in 2012, Republican strategists warned that the party must do more to court the group. Then came Mr. Trump, who earned less support from Hispanic voters than any other presidential candidate in recent history — but has since managed to maintain some and even increase support from those voters.

Conversations with dozens of members of Rivera’s congregation and with other Hispanic evangelicals around the country over the course of the year make clear that religious identity is often a more fundamental part of their political affiliation than ethnic identity. And Pastor Rivera’s feeling of political homelessness is pervasive — and one neither party seems to understand how to address.

Latinos are projected to be the largest minority to vote in the presidential election this year, and the 32 million eligible voters could play a decisive role in who wins the White House. Both parties have poured millions into Spanish-language ads courting moderate and conservative Latinos in particular. Though Hispanic evangelicals make up a small slice of the electorate, they are a key to Mr. Trump’s consistent support from roughly one-third of Hispanic voters, particularly in battleground states including Florida and Arizona. And their political importance is likely to grow in with the looming battle over Judge Amy Coney Barrett’s Supreme Court nomination. 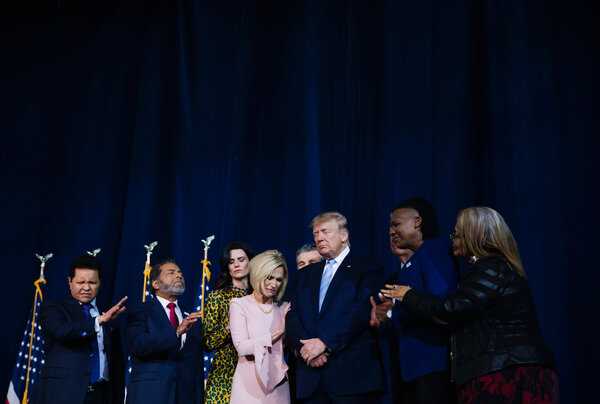 There is a certain assumption in Democratic circles, that Latino voters should be repulsed by the way Mr. Trump has demonized immigrants since the day he announced his presidential campaign in 2015. But Mr. Rivera understands it is not that simple.

Among Hispanic evangelicals cheering for Mr. Trump, Christianity is almost a kind of nationality, one that supersedes all else. In the president, they see a leader who is protecting their religious freedom and appointing judges who oppose abortion.

“He is tough and he takes on these issues everyone else is afraid of,” said Carlos Ruiz Esparza, a 52-year-old steadfast supporter of the president who regularly worships with Mr. Rivera. Mr. Ruiz Esparza cited Mr. Trump’s policies on Israel as another source of his enthusiasm. “I believe that he’s just doing the courageous things based on Scripture, and making our country become what it should become and bring us all our blessings.”

When Mr. Rivera hears this, he generally simply nods. He does not see swaying political views as part of his job. His wife may still vote for Mr. Trump.

“Nobody in the Democratic Party gets my attention in a good way,” said Ruth Rivera, who said she could still change her mind. “I am worried they are too radical, talk of ‘free this’ and ‘free that’ and they want to teach values we do not share.”

There was a moment when Mr. Rivera felt the same way. In conversations over the past several months, his own views have shifted along with the course of the pandemic. In January, when it seemed Senator Bernie Sanders of Vermont might secure the Democratic nomination, Mr. Rivera could not fathom voting for someone who embraced anything approaching socialism. Yet he was equally uncomfortable watching the people he ministers demonized by the most powerful person in the country.

Mr. Rivera grew up in Puerto Rico, joined the Army in the 1970s, serving for several years before moving to Phoenix in the 1990s.

“I love the flag that he hugs like he is the only one who loves the flag,” Mr. Rivera said of Mr. Trump, his voice rising in anger.

Hispanic evangelicals are one of the fastest growing religious groups in the country, booming in states that could decide the presidential election, including Arizona, North Carolina and Colorado. Republicans have long sought to attract them dating back to the Reagan era and most aggressively by George W. Bush, who had the support of more than 40 percent of Latino voters, the highest level recorded.

This is not a question of assimilation — on the contrary, many Hispanic evangelicals primarily speak Spanish and see themselves as outside of any kind of mainstream, set apart by their religious views as much as their ethnicity. In conversations about politics, they say they believe that economic success essentially insulates against racism, and failure to achieve such success should be blamed on an individual rather than any kind of systemic problem.

The Trump campaign has taken a particularly aggressive approach to reach those voters, choosing a large Hispanic church in Miami to announce an evangelical coalition. In Florida, conversations with dozens of Hispanic evangelicals about the president revealed a steadfast commitment to Republicans, in part from people whose families fled communist-ruled countries, as well as also those who turn to church leaders for guidance on politics. They often spoke about feeling under siege, not because of their ethnic background, but because they see themselves as a minority in a largely secular country.

As a bishop for the last three decades, Mr. Rivera oversees nearly 50 churches in Arizona, Nevada and New Mexico, with a total of nearly 5,000 worshipers.

Throughout 2016, he vacillated about who would receive his vote for months. But ultimately he chose Hillary Clinton, despite his reservations. Sitting an election out seemed impossible to Mr. Rivera, who lived in Panama during the dictatorship of Manuel Noriega in the early 1980s.

He calls the dilemma of Hispanic evangelicals a “bitter-sour situation.” When he sees prominent evangelical leaders including Paula White and Ralph Reed lavish praise on Mr. Trump, he cringes.

“They try to present him as the messiah, but if he is the messiah he is not doing what we are supposed to do,” Mr. Rivera said.

When warnings about the coronavirus began coming in February, Mr. Rivera took notice. He urged his congregants to stop embracing and instead bump elbows. They installed hand sanitizer dispensers at the door.

But even in mid-March, just days before many states enacted mandatory stay-at-home orders, few were paying any attention to his warnings. They gathered in the front of the church kneeling against one another, squeezing one another’s shoulders. When Mr. Rivera offered his sermon, dozens came to the front to offer their own testimony.

Many congregants dismissed the warnings as exaggerated, others were hardly aware of it. It would be the last in-person service for more than two months.

In a way, it was something of a miracle that the church hasn’t endured more suffering — Arizona has been one of the hardest hit states, and Latinos have been infected at especially high rates. But just two of the members caught the virus at work, and one woman who lived in a nursing home died.

Some congregants were laid off from jobs or not called for work as a house cleaner or gardener. A few had found work cleaning the local hospitals. Even before the pandemic, the church was handing out donated clothing and stocking refrigerators for struggling families.

After weeks of services streamed online, then moved to the church parking lot, Mr. Rivera was determined to open the church doors again. He kept attendance capped around 100, less than half the capacity of the church.

“It is still a little scary,” he said in mid-May, before Arizona hit its peak infection rate. He saw other pastors boasting about their own reopenings. “I see them saying that people who take more precautions are people who don’t have faith. I take offense at that. I don’t want to go to the funeral for any one of my people for being stupid.”

“Our people are very used to hugging, and I understand that need to be embraced, but this is a new time,” he said.

Being a leader, Mr. Rivera said, meant telling people things they would rather ignore.

To him, it looked as though President Trump was beginning to take the virus more seriously and relying on medical experts to speak to the public. Like so many other evangelical leaders, he appreciated the way the administration was pushing for churches to open. Perhaps Mr. Trump would turn a corner and earn his vote after all, he said.

By the end of June, he changed his mind again.

“Every time he opens his mouth, there’s a controversy,” he said. “That is the only thing he has mastered. He just can’t make a statement that will unify the nation.”

His anger with other evangelical leaders grew. Too many, he said, are “blind supporters” of the president.

By late summer, Mr. Rivera had lost whatever modicum of enthusiasm he once had. To him, evangelicals are relying on an impossible notion of dominance. and“talking about things that we have no control over,” he said.

When he thinks about why so many of his congregants do support the president, he worries about what they hope he can do — he believes that no matter who wins in November, some things won’t change. “We will never have a Christian state that imposes all the rules that are in the Bible,” he added. “We don’t have a theocratic state, we have a republic, we have a nation that comes with those liberties.”