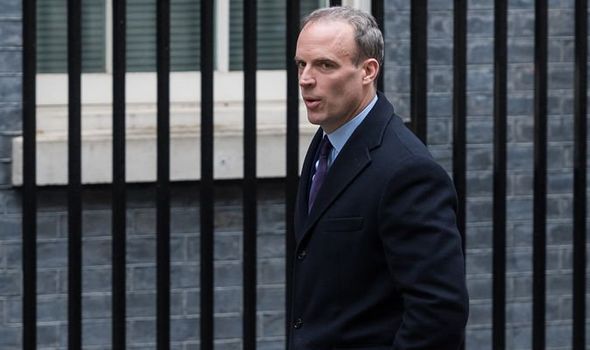 Justice Secretary Dominic Raab will unveil plans to give Parliament the power to override European rulings and free British courts and institutions from “undue influence” from judges in Strasbourg.

He will set out three key measures to allow MPs to reinterpret European rulings in line with UK laws and traditions.

They are expected to address concerns over the current human rights laws being used to halt the deportation of dangerous foreign criminals, with up to 70 percent of successful deportation appeals citing a right to family life.

A Government source said: “It’s wrong that human rights can be misused to allow dangerous criminals to trump the overriding need to keep the public safe.

“Our measures will put an end to this.

They will inject some common sense into the system, better protect our communities and restore public confidence in our human rights laws.”

The wider proposals are thought to be aimed at putting an end to Europeanstyle privacy laws stymieing free speech traditions in the UK. Last week, Mr Raab told the Commons Justice Committee: “I think there are other areas where we ought to be more pro-freedom.”

He believed the scope of free speech and democratic debate had “closed in a little bit in recent years”.

He added: “One of the quintessentially British traditions in this country is freedom of speech, the freedom that guards, frankly, all the others”.

It came after a court judgment in favour of the Duchess of Sussex in her battle with The Mail on Sunday over the leaking of her private correspondence. “I think the drift towards continental-style privacy laws innovated in the courtroom, not by elected lawmakers in the House of Commons, is something that we can and should correct,” the Justice Secretary said.

Mr Raab, who has made clear he does not intend to replace the European Convention on Human Rights, is expected to also set out plans to emphasise that UK lawmakers do not have to comply with Strasbourg case law until such time as it might be ruled against by the European Court of Human Rights.

A 12-year legal stand-off between the UK and the Strasbourg court after its judges ruled that a blanket ban on prisoners’ ability to vote breached their human rights, ended with Britain offering them to a tiny group of prisoners who were on temporary release and at home under curfew. Mr Raab told the committee that he is looking at a mechanism that would allow Parliament to “correct” case law that it did not like “in a specific or special way”.

At the Tory conference in October, he said: “It is absolutely perverse that someone guilty of domestic abuse could claim the right to family life to trump the public’s interest in deporting him from this country. We’ve got to bring this nonsense to an end.”

Violent offenders are allowed to stay

This year has seen the European court uphold appeals against deportation for a number of violent offenders.

These include Turkish national Aziz Dagli, who “used his car as a weapon” and rammed it into a taxi driver who had refused him a lift in Leicester in 2018.

He was jailed for four-and-a-half years after admitting grievous bodily harm but had his appeal upheld on the grounds that he had a family life in the UK.

The city’s crown court heard Dagli, who had come to England to study in 1989, caused the driver severe, lasting injuries.

Nigerian national Oyewopo Olorisade, 31, avoided deportation on the same grounds this year. He was given a four-year prison sentence for actual bodily harm and possession of class A drugs with intent to supply.

And in 2011, a violent drug dealer from Trinidad and Tobago escaped deportation, citing his “right to a family life”, despite having abused his partner.