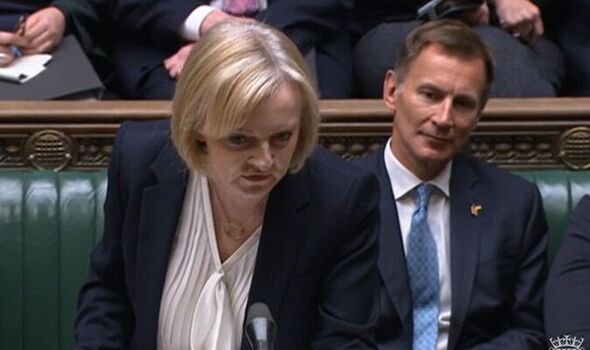 The pledge was under threat after Jeremy Hunt warned everything was up for review now he has taken over at the Treasury. But the Prime Minister declared she is “completely committed” to the lock following a backlash from Tory MPs and campaigners.

She told the Commons: “We’ve been clear in our manifesto that we will maintain the triple lock and I’m completely committed to it – so is the Chancellor.”

Ms Truss said the increase on state pensions and help with energy bills amounts to a generous package.

She said: “We are protecting the triple lock on pensions to ensure pensioners get the most generous support, as well as providing extra support with their energy bills.”

Mr Hunt was considering ditching the manifesto promise due to the squeeze on the public finances in the wake of the mini-budget fiasco.

No 10 later confirmed the policy was under review and insisted the government would focus on protecting the most vulnerable.

Downing Street said the decision was taken “jointly” by Ms Truss and Mr Hunt on Wednesday morning ahead of her appearance at the despatch box.

The Prime Minister’s official spokesman said it reflects the “unique position” of pensioners who are unable to increase their income through work.

“She and the Chancellor have discussed and agreed on the position the Prime Minister set out this morning,” the spokesman said.

The Tory manifesto in 2019 committed to the triple lock, which guarantees the state pension will increase in line with the highest figure of average earnings, inflation or 2.5 percent.

It was suspended during the pandemic as earnings soared as people returned to work from furlough and coronavirus restrictions, but was expected to be restored in time for next April’s increase in pension payments.

Failure to keep to reintroduce it could have cost a single pensioner £442 per year.

But campaigners warned that until the details of Mr Hunt’s plans are laid out in black and white they fear the lock remains at risk.

Lord Foulkes, a champion for older people, said campaigners must be “vigilant” in the run-up to the fiscal statement on October 31 that the government does not row back on the lock again.

He said pensioners had been “left reeling, confused and distressed” by the uncertainty of the last few days.

“At Prime Minister’s Questions yesterday Liz Truss said the Government remains committed to the Triple Lock on pensions, contradicting what her Chancellor said only two days earlier, which itself was reneging on their manifesto promise to keep it,” he said.

“So now we are all confused by this double u-turn and the division between the PM and her Chancellor. However, it would be daft to accept her latest assurance as it is the Chancellor who will be delivering the Budget on October 31.”

An Age UK spokesman said: “Until we see the Chancellor’s plan, we can’t be sure the triple lock is safe.

“With the cost of living rising, the Government must reinstate the triple lock and uprate benefits to protect the poorest.”

Helen Morrissey, senior pensions and retirement analyst at Hargreaves Lansdown, said: “After such a trying time, pensioners need certainty about how their state pension will be uprated, and there still may be worries that given the pace of u-turns we have seen, this latest promise can’t be guaranteed.

Around 12.5 million people receive the state pension. Most qualify under the old lower-paid system, which would mean a 10 percent hike equated to an extra £14 a week.

Labour refused to commit to keeping the lock in place after the next general election if it wins power.

Levelling Up Secretary Lisa Nandy said: “We don’t want to see more pensioners pushed into poverty. But what I can’t do today, and I’m not going to do, is make commitments for the next general election, which we think will be in a couple of years time because we don’t know what we’re going to inherit from the government. We think it’s going to be the worst economic situation that an incoming government has inherited in potentially the last century. And every commitment that we make at the next general election will be fully costed, will set out how we’re going to spend people’s money and spend it wisely. Because it’s their money and they don’t have a lot of it.”

Liberal Democrat work and pensions spokeswoman Wendy Chamberlain said the Government had been “dragged kicking and screaming by their own backbench’s backlash into doing the right thing”.

“This is a party in utter chaos, that can’t keep its own policies straight from day to day, let alone through the winter,” she added.

Campaigners had warned that failing to keep pensions in line with rising prices would be “devastating” and a “flagrant breach of trust”.