The First Minister said Ms Truss “looked as if she’d swallowed a wasp” when Ms Sturgeon told her she had appeared in Vogue twice, as she recalled an exchange with the Tory leadership candidate in which the prime minister hopeful had tried to find out how to land an interview in the fashion magazine.

The politicians’ conversation took place at an event at the COP26 summit in Glasgow last year.

Ms Strugeon said appearing in Vogue “was the main thing she (Ms Truss) wanted to talk to me about”.

Speaking in an interview with LBC’s Iain Dale at the Edinburgh International Conference Centre during the city’s Fringe festival, the First Minister recalled: “I said to her they came and asked me.

“I didn’t really mean to do this, but I said to her it hadn’t actually been my first time in Vogue, it had been my second time.

“It looked a little bit as if she’d swallowed a wasp.

“I’m sure she’ll be in Vogue before too long.” 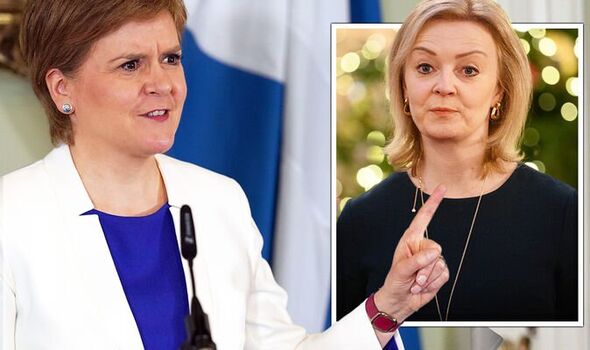 She continued: “I remember it because there we were at the world’s biggest climate change conference in Glasgow, world leaders about to arrive.

“That was the main topic of conversation she was interested in pursuing. And once we’d exhausted that it kind of dried up.

“I’m sure we’ll have many more conversations about many more substantive things.”

Ms Sturgeon told the audience that, considering the Vogue episode, she had been surprised to hear Ms Truss had branded her an “attention seeker”.

The Foreign Secretary told a hustings event with Conservative members in Exeter last week that “the best thing to do with Nicola Sturgeon is ignore her”.

Ruling out a second Scottish independence referendum, Ms Truss had told the audience: “She’s an attention seeker, that’s what she is.

“What we need to do is show the people of Scotland, Northern Ireland and Wales what we’re delivering for them and making sure that all of our government policies apply right across the United Kingdom.”

Asked about Ms Truss’s remarks about her, Ms Sturgeon said she initially thought “it was made up, it was a spoof”.

She added: “She wanted to know how she could get into Vogue – and she calls me an attention-seeker.”

During the interview, Ms Sturgeon also described Boris Johnson as a “disgrace to the office of prime minister”.

Compared Mr Johnson with his predecessor, the First Minister said: “I think perhaps uncharitably I described my conversations with Theresa May when she was prime minister as being soul destroying.

“I look back somewhat fondly now on that.”

Ms Sturgeon said she and Mrs May “differed massively” in their political views. However, she clarified, the former prime minister “took the job seriously”.

Her interactions with Mr Johnson, meanwhile, were “one long bluster”, she said, adding: “You know, he was a third prime minister I’ve dealt with as First Minister.

“You know, I’m going to be blunt here, he was a disgrace to the office of prime minister.”

Express.co.uk approached Vogue for comment on whether it plans to feature Ms Truss in a future issue.