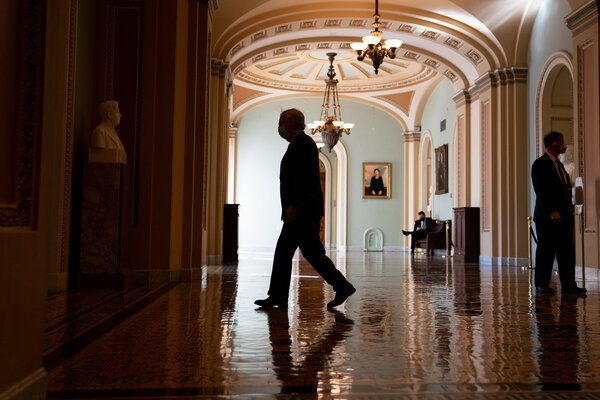 WASHINGTON — Senator Mitch McConnell on Tuesday bluntly warned Democrats who are considering weakening or eliminating the filibuster to push through progressive legislation that Republicans would bring the Senate to a complete standstill and derail President Biden’s agenda if Democrats took that step.

“Everything that Democratic Senates did to Presidents Bush and Trump, everything the Republican Senate did to President Obama, would be child’s play compared to the disaster that Democrats would create for their own priorities if — if — they break the Senate,” said Mr. McConnell, the Kentucky Republican and minority leader. “The most mundane task of the Biden presidency would actually be harder — harder, not easier — for Democrats in a post-nuclear Senate.”

Mr. McConnell was referring to the prospect that Democrats might resort to a move known as the “nuclear option,” to force a change in the Senate rules that allow senators to block action on any bill unless proponents can muster 60 votes to move forward. That would effectively destroy the filibuster, allowing the majority party — currently the Democrats — to muscle through any measure on a simple majority vote.

Progressives have been agitating for such a change to allow Mr. Biden to steer his agenda around Republican obstruction, and a growing number of Democrats are openly considering it.

Mr. McConnell issued his warning after Senator Richard J. Durbin of Illinois, the No. 2 Senate Democrat and a respected veteran of the institution, on Monday said it was time to stop allowing the minority party to routinely block legislation by requiring a three-fifths majority to advance most bills. It was the most explicit call yet by a leading Democrat leadership to take action.

“Today’s filibusters have turned the world’s most deliberative body into one of the world’s most ineffectual bodies,” said Mr. Durbin, who said the burden should be on opponents of legislation to maintain a filibuster rather than on supporters to produce 60 votes to advance it. “If a senator insists on blocking the will of the Senate, he or she should have to pay some minimal price of being present. No more phoning it in. If your principles are that important, stand up for them, speak your mind, hold the floor, and show your resolve.”

The Senate operates under arcane rules that are often bypassed by the use of what is known as unanimous consent agreement where no senator objects. Mr. McConnell threatened that if Democrats made significant changes to the filibuster rules, Republicans would deny consent even on the most mundane of matters and require senators to be present and voting to do virtually anything, effectively bogging down the Senate.

“Let me say this very clearly for all 99 of my colleagues,” Mr. McConnell said. “Nobody serving in this chamber can even begin — can even begin — to imagine what a completely scorched earth Senate would look like. None of us have served one minute in a Senate that was completely drained of comity, and this is an institution that requires unanimous consent to turn the lights on before noon.”

Some Senate Democrats and progressive activists have called on Democrats to weaken the filibuster to push ahead with a voting rights bill and other liberal legislative priorities over Republican objections while Democrats control both Congress and the White House.