Half of American adults have received at least one shot of the coronavirus vaccine. Now comes the hard part: persuading the other half to get it. 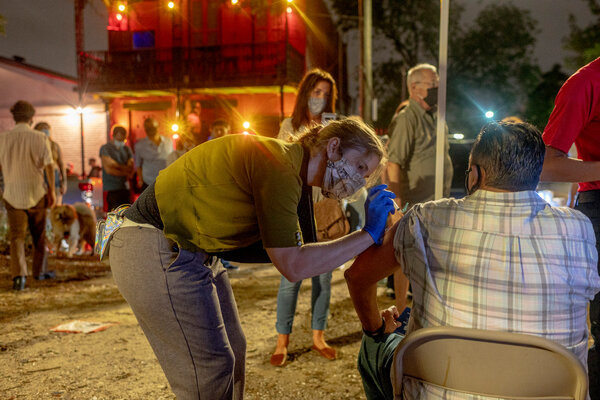 WASHINGTON — Now that President Biden has met his goal to have all adults eligible for the coronavirus vaccine, health officials around the country are hitting what appears to be a soft ceiling: More than half the nation’s adults have gotten at least one dose, but it is going to take hard work — and some creative changes in strategy — to convince the rest.

State health officials, business leaders, policymakers and politicians are struggling to figure out how to tailor their messages, and their tactics, to persuade not only the vaccine hesitant but also the indifferent. The work will be labor intensive, much of it may fall on private employers — but the risk is clear: if it takes too long to reach “herd immunity” — the point at which the spread of the virus slows — worrisome new variants could emerge that evade the vaccine.

“If you think of this as a war,” said Michael Carney, the senior vice president for emerging issues at the U.S. Chamber of Commerce Foundation, “we’re about to enter the hand-to-hand combat phase of the war.”

On Wednesday, President Biden will announce a plan to encourage the unvaccinated to get their shots, calling on all employers in the United States to offer full pay to their workers for time off to get vaccinated and to recover from any after effects. He will also announce a paid leave tax credit to offset the cost for companies with fewer than 500 employees, according to senior administration officials, who previewed the announcement on condition of anonymity.

The announcement will come in conjunction with an address by the president to mark what his aides are calling a major milestone: 200 million shots in the arms of the American people, with a week to go before the president’s 100th day in office. But the distribution of those shots in uneven: While New Hampshire has given at least one shot to 59 percent of its citizens (a percentage that includes children, most of whom are not yet eligible), Mississippi and Alabama at 30 percent.

The laggards are trying to adjust. In Louisiana, where 40 percent of the adult population has had one shot even though all adults have been eligible since March, officials are delivering doses to commercial fishermen near the docks and running pop-up clinics at a Buddhist temple, homeless shelters and truck stops. Civic groups are conducting door-to-door visits, akin to a get-out-the-vote effort, in neighborhoods with low vaccination rates.

In Alabama, fewer than 40 percent of adults have had at least one shot, and Dr. Scott Harris, the state health officer, is trying to reach out to rural white residents, who demonstrate high rates of vaccine hesitancy. They are mistrustful of politicians and the news media, so Dr. Harris is asking doctors to record cellphone videos, with a plea: “Please email them to your patients, saying, ‘This is why I think you ought to take the vaccine.’”

Some companies are contemplating running their own vaccine clinics and trying to educate their workers about the benefits of getting protected against a virus that has already killed more than 560,000 Americans. Vaccine mandates could be an option, just as many employers led campaigns to ban indoor smoking. The Equal Employment Opportunity Commission has told employers that they can require vaccination to protect public health.

But with Republicans arguing that mandates amount to an intrusion on personal liberty, the White House is steering clear of the discussion, saying the decision to require vaccination or proof of it will be left to individual employers. And with the economy gearing up, managers are reluctant to demand inoculation, fearing too many employees would seek work elsewhere.

White House officials say they take it as a good sign that more than 51 percent of American adults have turned out for a first dose — “a major milestone,” said Dr. Bechara Choucair, the White House vaccinations coordinator, and an indication that “there are tens of millions of people who are still eager to get vaccinated.”