Speaking on his LBC show, Mr Farage said: “Let me be nice about Boris Johnson’s Government.

“Last night, there was a remarkable speech in Brussels by David Frost. The UK Chief Brexit negotiator.

“Now, I have to be cautious here. Because I sat in this chair back in early 2017 when Theresa May gave her Lancaster House speech, and I listened to words and phrases that I’ve been uttering for 20 years, and being condemned and called all sorts of nasty things.

“And she was saying them, and I thought, wow, this is it, it’s going to happen ‘Yipee’.” 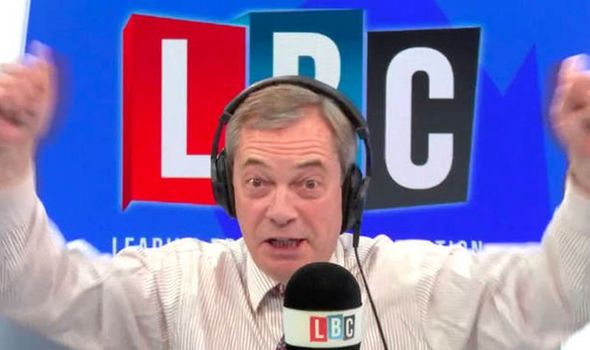 He continued: “And of course, it all went horribly, desperately, very badly wrong. Luckily, I did smell a rat in time and did something about it.

“So I have to say this with some degree of caution having been very badly burnt before. But there is a difference here.

“This speech wasn’t given, designed for UK domestic political audience.

“This speech was given by David Frost in Brussels. And he made it absolutely clear that we seek an EU-Canada style trade deal, one that abolishes most tariffs makes inroads into services.”