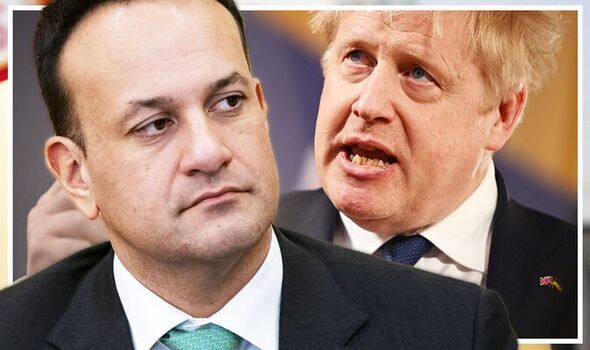 In a blog penned for the Politeia think tank, Ray Bassett, Ireland’s former ambassador to Canada, Jamaica and the Bahamas, offered a blunt assessment, suggesting the result was “the stuff of nightmares” for Mr Martin and Mr Varadkar.

He further suggested it would make both increasingly eager to resolve the deadlock surrounding the Northern Ireland Protocol, the mechanism agreed between the UK and the EU which is intended to prevent a hard border on the island of Ireland. Unionist critics claim the Protocol has instead driven a wedge between Great Britain and Northern Ireland by imposing a border down the Irish Sea.

Sinn Fein took 29 percent of first preference votes, and 27 seats in the assembly, and is now the largest single party, earning the right to nominate Michelle O’Neil as First Minister.

With the Democratic Unionist Party (DUP) refusing to enter into a power-sharing agreement without its concerns about the Protocol being addressed, such a prospect appears to be some way off.

However, Mr Bassett suggested the Irish Government, led by Taoiseach Micheal Martin and his Tanaiste (or deputy) Leo Varadkar would already be feeling distinctly queasy.

He explained: “The Irish Government is very uneasy about the election outcome. The Taoiseach and Tanaiste never even congratulated Michelle O’Neill and Sinn Fein on their triumph.

“The spectre of Sinn Fein electoral success in the North, and the likelihood that it will only further add to that party’s political momentum across the island of Ireland, is the stuff of nightmares for them.”

Both Mr Martin and Mr Varadkar would be “desperately anxious” to resolve the NI Protocol and avoid inflaming Nationalist sentiment, particularly in the Republic, Mr Bassett suggested.

He added: “They will be pressing Brussels and indeed London for flexibility and a workable solution to the problems of the Protocol.

“The days of bellicose announcements in Dublin on the need to punish Britain for Brexit are long gone.”

Even Sinn Fein would be aware the Protocol had no support among Unionists and that it was in nobody’s interest, including Republicans, to have a deeply alienated community in Northern Ireland.

Mr Bassett added: “Michelle O’Neill has signalled that she supports minimising the effect of the Protocol.

“Therefore, the election result may have inadvertently created better conditions for a resolution of the issue. There is a commonality of interest in getting a solution.

“This of course would depend on the abandonment of absolutist positions.”

Brussels needed to accept the prospect of the Single Market being undermined by having British standards operating in Belfast was “bordering on the farcical” while Unionists needed to realise accepted the fact that an Irish sea border in respect of live animals, plant disease, etc had existed between NI and GB for many years, prior to Brexit.

As such, the future arrangements should bring that sea border back as close as possible to its original very low profile, through radical reform of procedures and technology, he stressed.

Referring to the war in Ukraine, Mr Bassett concluded: “At a time of economic and political turbulence internationally, this is not an opportune time to initiate a major trade dispute.”