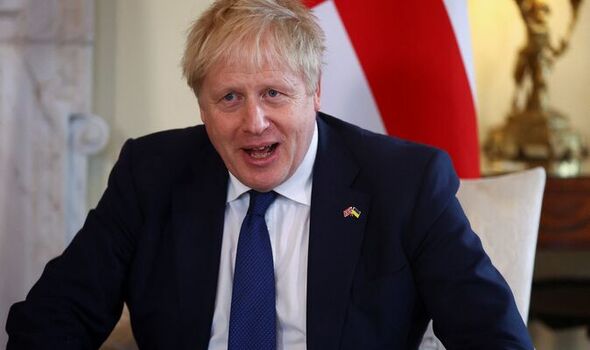 The Prime Minister is expected to meet controversial Saudi leader Crown Prince Mohammed bin Salman during a visit to the Gulf state in the coming days. Although Downing Street would not confirm the Prime Minister’s likely trip to Riyadh, the premier is facing calls from Tory MPs to urge the Saudis to release more oil. The invasion of Ukraine by the Kremlin has put more pressure on energy costs as the West tries to wean itself off supplies of Russian oil and gas.

The pressure is also on to find a way of reducing crippling fuel pump prices which are rising at their fastest rate in 13 years, reaching record levels.

Mr Johnson met with leaders of the offshore oil and gas industry yesterday in an attempt to tackle the crisis head-on.

And the PM has promised to unveil a radical new “energy strategy” this month to ensure the UK can meet its domestic needs from a mix of renewables and nuclear power.

This could also include turning back to coal despite promises to phase it out to reduce the UK’s reliance on the dirty fuel.

Officials are talking to EDF, the French energy giant, to see if it could keep the West Burton A plant in Nottinghamshire going.

Fracking is another option that could be considered with Downing Street insisting that “nothing is off the table”.

But any diplomatic mission by Mr Johnson to Saudi Arabia would risk being seen as highly controversial because of the country’s human rights record.

The Health Secretary insisted that it was important to have a “longer-term economic relationship” amid soaring pump prices and household bills.

The Prime Minister’s official spokesman said: “He is currently hosting leaders of the UK’s offshore oil and gas industry this morning to discuss the UK’s energy security and investment in the North Sea.”

Prince Salman has been repeatedly criticised for human rights abuses.

Over the weekend, the country’s state-run Saudi Press Agency announced the executions of 81 people convicted of a variety of crimes, marking the largest mass execution conducted there in recent memory.

The Government will be discussing a “range of issues” with Saudi Arabia, Downing Street said.

The Prime Minister’s official spokesman said the Government wanted to reduce volatility in the oil market and bring down prices.

Asked whether the UK would like to see the Saudis increase oil production, the spokesman said: “We will be speaking to the Saudis about a range of issues, not just energy supply.

“Diversifying our energy supply is important, as is boosting renewable energy. There are no quick fixes but we do want to reduce the volatility and bring prices down.”

The spokesman said the Government did not “shy away” from raising human rights issues with allies.

“The UK is firmly opposed to the death penalty in every country as a matter of principle. We continue to raise human rights issues with other countries including Saudi Arabia,” the spokesman said.

“We do not shy away from raising these issues with our partners.”

Russia is the world’s largest oil exporter and second-largest crude oil seller after Saudi Arabia. It is still trading both, but the supply threat has sent prices soaring.

Moscow exports about five million barrels of oil a day.

Saudi Arabia has about two million barrels a day in spare capacity, and the United Arab Emirates one million.

If Mr Johnson can manage to persuade the Saudis – who have remained neutral over the Ukraine invasion – to co-operate, the extra capacity would go a long way towards negating the reliance on Russia. But Russia is a strong ally of oil rival Iran so any deal will potentially increase geo-political tensions in the area.

However, India may bail out Russia by taking up an offer to buy crude oil and other commodities at a discount despite Western attempts to isolate Moscow through sanctions.

India, which imports 80 per cent of its oil needs, usually buys only about 2-3 per cent from Russia.

But with oil prices up 40 per cent so far this year, the government is looking at increasing this if it can help reduce its rising energy bill.