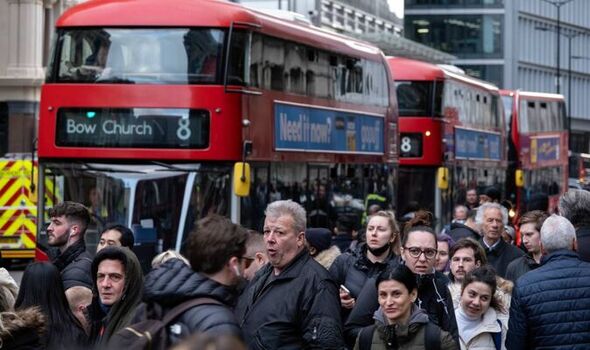 Government sources said “nothing is off the table” when it comes to breaking the disruptive action which could begin with rail walkouts later this month. Transport Secretary Grant Shapps has said that the Government could repeal a legal ban on agency staff filling in for striking workers. He insisted Britain will not “be held to ransom”.

Mr Shapps added that “further measures certainly would come in during this particular dispute, if it can’t be resolved”.

The switch in legislation would allow companies to hire temporary workers to cover some roles and prevent disruption.

Mr Shapps added: “We will be looking at the full suite of modernisation that’s required.

“The country must not continue to be held to ransom.”

The Transport Secretary said any change could involve secondary legislation, which can be signed off by ministers in a “very fast” way to allow measures to be put in place for rail strikes later this month.

The bold plans to make the legal adjustment are being drawn up by officials in the Department for Business, Energy and Industrial Strategy.

The new plans could apply to all strikes and not just those on the rail system, it was said.

Such a move would ramp up the Government’s growing battle with public sector unions demanding huge pay rises at a time when millions of families are facing hardship during the cost-of-living crisis.

Fellow cabinet minister Brandon Lewis said the Government is “looking at everything we can do to keep the railways working”.

Mr Lewis said yesterday that “no decision has been made yet” on whether to bring in any agency workers.

But he also alluded to rail sector staff having an average salary of about £44,000 a year, compared to the national rate of £26,000.

“And I think it is important that we are looking at everything we can do to keep the railways working.”

Former Tory leader Sir Iain Duncan Smith said the strikes can cause damage to industries by disrupting people’s means of getting to work.

And this factor should also be taken into consideration, possibly with an option for prosecution, he explained.

Sir Iain said: “It’s important that consideration is taken of the ­damage that it will do – particularly when it comes to transport – to the lives of those who actually are using that transport link to get to work themselves.

“So the damage to the industries, that are reliant on the work that takes place, needs also to be taken into consideration, whether that allows prosecution to take place or there to be further action.”

The war of words between rail unions and ministers has been escalating since the RMT announced three days of strikes, after talks over pay, terms and conditions and redundancies fell through.

More than 40,000 RMT members working for Network Rail and 13 train operating companies across Britain will strike on June 21, 23 and 25.

London Underground will be affected by a separate RMT and Unite strike on June 21. Aslef union members on Hull Trains, Greater Anglia and the Croydon Tramlink will also stage a series of walkouts between June 23 and July 14.

The union, led by Manuel Cortes, has warned strike action could take place on lines and at stations ­serving the Commonwealth Games in Birmingham. The sporting extravaganza runs from July 28 to August 8.

These various strikes will disrupt work, school and events for ­millions of people, including students taking their GCSEs and A-levels.

Figures released by the Department for Transport showed that last year the median salary of rail workers was £44,000, about 70 per cent above the national average of £26,000.

The median refers to the midpoint of a range of numbers ordered from smallest to largest. In comparison, nurses earned £31,000, teachers £37,000 and care workers £17,000.

Salaries for senior train drivers sit at an average of £54,000 a year, according to company analysts Glassdoor, which collates data from staff. Trainees begin on around £25,000, which doubles when they eventually qualify.

The most experienced train ­drivers can earn up to £70,000 before overtime with some ­operators, it was said.