Home » Politics » On Afghanistan, G.O.P. Assails the Pullout It Had Supported Under Trump

Eager to denounce President Biden, some Republicans have flip-flopped on bringing U.S. troops home — making it difficult to discern what they actually believe. 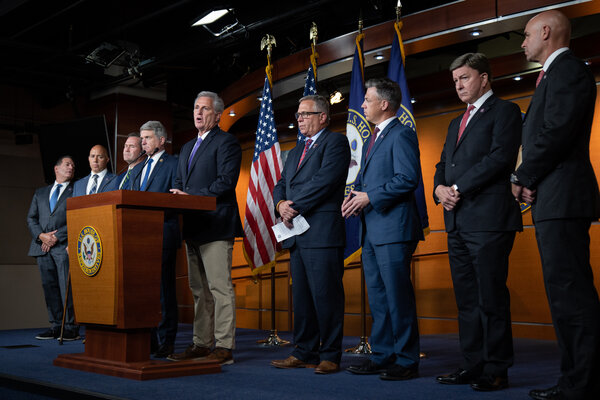 Now, the three are among dozens of prominent Republicans who, with President Biden seeing the pullout through, have sharply reversed themselves — assailing Mr. Biden even as he keeps a promise that Mr. Trump had made, and carries out a policy to which they had given their full-throated support.

The collective U-turn reflects Republicans’ eagerness to attack Mr. Biden and ensure that he pays a political price for the way he ended the war. With Mr. Trump reversing himself as the withdrawal grew chaotic and, in its endgame, deadly, it also offers new evidence of how allegiance to the former president has come to override compunctions about policy flip-flops or political hypocrisy.

“You can’t be going out there and saying, ‘This war was worthless and we need to bring the troops home’ in May, and now hitting Biden for doing just that,” said Representative Adam Kinzinger of Illinois, a Republican who broke with Mr. Trump after the Jan. 6 Capitol riot and has long favored maintaining a military presence in Afghanistan. “There’s no shame anymore.”

Mr. Trump came into office having reversed his party’s long-held position on foreign interventions and called for an immediate removal of American troops stationed overseas. In February 2020, he announced a peace treaty with the Taliban, negotiated by Mr. Pompeo, that called for ending the American presence by May 1, 2021.

After his defeat last November, Republicans clung to Mr. Trump’s America-first line. They urged Mr. Biden to stick to the May 1 deadline, and publicly groused when Mr. Biden extended the date for a withdrawal until Aug. 31. “That kind of thinking has kept us in Afghanistan nearly 20 years,” Representative Andy Biggs of Arizona complained at the time.

But as the Americans’ final days in Afghanistan devolved last month into a frantic race to get more than 125,000 people out — during which 13 service members were killed in a bombing attack outside the Kabul airport — Republican lawmakers and candidates who had embraced Mr. Trump’s agreement with the Taliban abruptly changed their tune. They savaged Mr. Biden for negotiating with the Taliban and denounced his avowed eagerness to wind down the American presence in Afghanistan before Sept. 11, calling it a sign of weakness.

“I would not allow the Taliban to dictate the date that Americans leave,” Mr. McCarthy said at a news conference on Friday. “But this president did, and I don’t believe any other president would, Republican or Democrat, outside of Joe Biden.”

Once defined by its hawkishness, the G.O.P. since Mr. Trump’s 2017 election has ruptured into camps of traditional interventionists like Senator Mitch McConnell of Kentucky, who never quite warmed to Mr. Trump’s inward-looking foreign policy, and backers of Mr. Trump’s America-first approach, who shared his impatience in extricating the nation from intractable conflicts abroad.

Last year, Mr. McConnell, then the majority leader, took to the Senate floor to decry Mr. Trump’s planned withdrawal from Afghanistan, warning that a premature exit would be “reminiscent of the humiliating American departure from Saigon.”