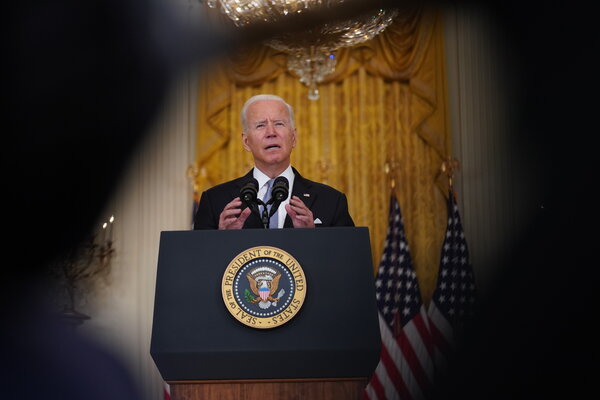 The following is a transcript of President Biden’s remarks on Monday about the U.S. withdrawal from Afghanistan.

I want to speak today to the unfolding situation in Afghanistan, the developments that have taken place in the last week and the steps we’re taking to address the rapidly evolving events.

My national security team and I have been closely monitoring the situation on the ground in Afghanistan and moving quickly to execute the plans we had put in place to respond to every contingency, including the rapid collapse we’re seeing now.

I’ll speak more in a moment about the specific steps we’re taking. But I want to remind everyone how we got here and what America’s interests are in Afghanistan.

We went to Afghanistan almost 20 years ago with clear goals: get those who attacked us on Sept. 11, 2001, and make sure Al Qaeda could not use Afghanistan as a base from which to attack us again. We did that. We severely degraded Al Qaeda and Afghanistan. We never gave up the hunt for Osama bin Laden and we got him.

I’ve argued for many years that our mission should be narrowly focused on counterterrorism, not counterinsurgency or nation-building. That’s why I opposed the surge when it was proposed in 2009 when I was vice president. And that’s why as president I’m adamant we focus on the threats we face today, in 2021, not yesterday’s threats.

Today a terrorist threat has metastasized well beyond Afghanistan. Al Shabab in Somalia, Al Qaeda in the Arabian Peninsula, Al Nusra in Syria, ISIS attempting to create a caliphate in Syria and Iraq and establishing affiliates in multiple countries in Africa and Asia. These threats warrant our attention and our resources. We conduct effective counterterrorism missions against terrorist groups in multiple countries where we don’t have permanent military presence. If necessary, we’ll do the same in Afghanistan. We’ve developed counterterrorism over-the-horizon capability that will allow us to keep our eyes firmly fixed on the direct threats to the United States in the region, and act quickly and decisively if needed.

When I came into office, I inherited a deal that President Trump negotiated with the Taliban. Under his agreement, U.S. forces would be out of Afghanistan by May 1, 2021, just a little over three months after I took office. U.S. forces had already drawn down during the Trump administration from roughly 15,500 American forces to 2,500 troops in country. And the Taliban was at its strongest militarily since 2001.