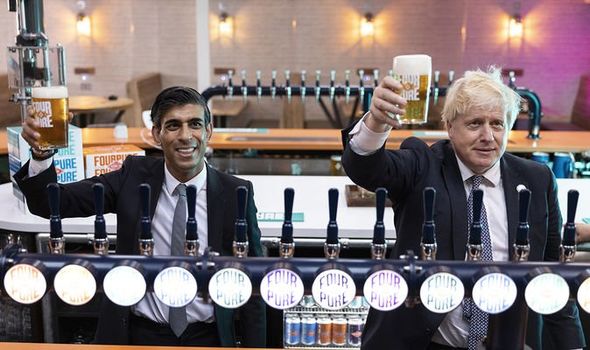 Pubs, restaurants, hotels, music venues, theatres and gyms can claim a discount up to a maximum of £110,000.

A pint in the pub will be 3p cheaper in the biggest cut for 50 years after Mr Sunak used Brexit freedoms to shake up archaic alcohol taxes.

He told MPs: “This is not temporary. It’s a long-term investment in British pubs of £100million a year and a permanent cut in the cost of a pint of 3p.”

The Chancellor said quitting the EU meant he could finally reform an out-of-date system.

Drinks will be taxed on their strength for the first time, meaning the price of port and sherry will rise but the cost of rose and sparkling wine, cider and draught beer will be cut.

The Chancellor, who is teetotal, said he wanted to help the industry which was one of the hardest hit by the pandemic.

Tax reforms will help alcohol producers and encourage people back into pubs. He said: “We are taking advantage of leaving the EU to announce the most radical simplification of alcohol duties for over 140 years.”

Mr Sunak said the duty system was “outdated, complex and full of historical anomalies” and the number of duty rates would be cut from 15 to six.

He told MPs levies will be based on a “common-sense principle” of higher rates for stronger drinks and that lower alcohol drinks will be cheaper after being overtaxed for decades.

Mr Sunak said he was cutting the “irrational” 28 percent supertax on sparkling wines after consumption af su doubled over the last decade.

All bottles of fizz will have the same duty as still wines of the same strength.

Treasury analysis showed Kent-based Chapel Down’s English sparkling wine will have 64p less tax on it per bottle, a £9 bottle of 11 percent strength Sauvignon Blanc will drop by 12p and Bailey’s Irish Cream by 41p. But sherry taxes will rise, with an extra 51p on a bottle of Harveys or Croft, while ports such as Taylor’s and Cockburn’s will cost £1.09 more.

Miles Beale, chief executive of the Wine and Spirit Trade Association, said: “By offering continued respite to the wine and spirit sector his actions will help save jobs and, in time, replenish revenues to the Treasury through growth in our potential-filled sector.”

The Chancellor announced a new draught relief that will cut duties on beer and cider on tap by five percent.

It is the biggest cut to cider duty since 1923 and the biggest for beer for 50 years. Mr Sunak 50 said that ending a premium on draught fruit cider and beer will help to halt the era of cheap, highstrength drinks that can harm health.

He said that his reforms were “simpler, fairer and healthier”.

The Chancellor added: “They help with the cost of living while tackling problem drinking. They support innovative entrepreneurs and craft producers. They back pubs and public health and years are only possible because we’ve left because Nik Antona, chairman of the Campaign for Real Ale (CAMRA) said: “The introduction of a draught duty rate is a game changer for cask beer drinkers, cider and perry drinkers and the Great British local.”

The changes come into force in February 2023, while a planned increase in duty on spirits like Scotch whisky, wine, cider and beer has been cancelled in a tax cut worth £3billion. Karen Betts, chief executive of The Scotch Whisky Association, said: “By freezing duty, the Chancellor has given welcome relief to all distillers, specifically in Scotland where 92 per cent of all UK spirits are produced or bottled.

“It’s confirmation the UK Government wants to support one of Scotland’s most important industries and take action to protect jobs, investment and exports and to bolster the recovery in hospitality and tourism.”

An extra £2billion will go to schools and colleges to help with their Covid recovery programmes – taking the total to nearly £5billion.

The Chancellor said the Government had ambitious plans to improve the life chances of future generations.

Around £300million will be spent on a Start For Life programme to help new parents, improve perinatal mental health, and fund a network of family hubs.

Childcare providers will be given a £170million funding increase over the next four years to improve quality and £150million will go on training and development for early years workers.

School holiday food and activity programmes will continue in a £200million-a-year programme.

Hauliers were handed a lifeline with the suspension of the HGV road user levy until 2023. The tax is a time-based charge of up to £1,000 a year or £10 a day and applies to all vehicles weighing 12 tons or more using UK roads.

The charge, paid by vehicle owners, also makes sure HGV operators from abroad are paying towards the cost of building and maintaining roads in Britain.

The Chancellor said it was being suspended for a further year after being initially halted until August. The Government is also freezing vehicle excise duty for HGVs.

The response comes after reports raised fears that millions of families would have to go without at Christmas.

The Government said up to 4,000 people would be trained to help tackle the shortage and one million letters are being sent to those who hold a current HGV driving licence to encourage them back.

Property developers will have to pay a four percent tax on new-build homes to fund the removal of dangerous, flammable cladding.

The Residential Property Developers Tax will raise around £5billion as the Government charges large construction companies with profits of more than £25million.

Many homeowners have been left with ruinous bills after dangerous cladding was discovered on their properties.

The levy will help fund the removal of unsafe materials on high-rise buildings found after the Grenfell Tower disaster in June 2017.

But Lawrence Bowles, at estate agents Savills, only 31 developers made profits of more than £25million in 2019, the last year when housebuilding was not disrupted by the pandemic.

Flat owners in buildings under 18 metres tall have only been offered loans to remove cladding. High-rise buildings with other fire-safety flaws such as wooden balconies and missing fire barriers are not eligible.

A pledge of £640million a year was made to tackle rough sleeping and homelessness.

One m warn the Ch cr b£ an month after Big Issue founder Lord Bird warned in the Daily Express that Britain stands on precipice of a homelessness disaster the Chancellor also acknowledged the scale of the crisis. He said: “We’ve reduced rough sleeping by over a third, but we will go further with £640million a year for rough sleeping and homelessness.”

He said the pledge was an 85 percent increase in funding compared to 2019. Speaking exclusively to this newspaper to magazine’s 30th anniversary, Lord Bird said: “You might hear people complain the sort of action we are asking for comes at too high a cost, but it is quite the opposite – not taking action comes at a far greater cost, not just societally but financially.

“The cost to the Treasury can double or treble when someone becomes homeless, as the additional services people require come at a much higher price.”

Campaigners believe alcohol was prioritised over the environment just days before the crucial COP26 conference in Glasgow.

Rebecca Newsom, Greenpeace’s head of politics, said: “The climate emergency should have been the centrepiece of this spending review ahead of the most critical UK-hosted talks in years, but Rishi Sunak spent more time discussing duty on domestic cider.”

The Chancellor kept the freeze on fuel duty and cut air passenger tax on domestic economy flights by 50 per cent – from £13 to £6.50. But he increased air passenger duty on long-haul trips of more than 5,500 miles from April 2023. Mr Sunak said he would urge firms to take up green investments such as solar panels and heat pumps by exempting them from business rates. There will also be up to £230million from the Global Britain Investment Fund for offshore wind manufacturing.

Spending on overseas aid will return to 0.7 percent of national income by 2025 if the economy continues to rebound from the pandemic.

The Government’s commitment was dropped at the height of the crisis as the Chancellor wrestled to protect the nation’s finances.

Funding was reduced to 0.5 percent but some Conservative MPs objected to the change, saying it harmed the country’s reputation internationally.

Rishi Sunak said at the time that spending on overseas development projects would return when the UK was back on its feet.

He told MPs the latest forecast shows that he can restore the pledge in 2024-25, before the end of the current Parliament.

But charities and campaigners said they want the target restored more quickly.

A £2.2billion boost will help to revive the creaking criminal justice system.

The huge war chest in the battle against crime will across the courts, prisons and probation It will also lead to a renewed crackdown on county lines drugs gangs and improve prosecution and conviction rates those accused of attacking women and girls. Officials say it will “begin to reduce the rise in court waiting times caused by the pandemic, ensuring swifter access to justice for victims of crime”. An extra £150million will be provided every year for prevention initiatives to keep communities safe.

And £200million will be allocated to improving prison leavers’ access to accommodation, employment support and substance misuse treatment. Some £3.8billion committed over three years “to the largest prison -programme in a generation”.

Ships flying the Red Ensign – the UK’s merchant shipping flag – will be rewarded with a tax break.

The Chancellor said Brexit offered the chance to deliver a “simpler” and “fairer” tax system, explaining that he would reform the tonnage tax regime linked to shipping.

The Treasury wants more firms to have their headquarters in the UK.

Mr Sunak told MPs: “When we were in the old EU system, ships in tonnage tax were required to fly the flag of an EU state. But that doesn’t make sense for an independent nation.

“Our tonnage tax will, for the first time ever, reward companies for adopting the UK’s merchant shipping flag, the Red Ensign. That is entirely fitting for a country with such a proud maritime history as ours.”

The Treasury said it would also make it easier for ships that help contribute to the UK’s net zero goals – with cable-laying vessels for wind farms for example – to join its tonnage tax scheme.

Devolved administrations were given their biggest cash injection since 1998.

Scotland’s block grant will go up by an average of £4.6billion a year, while Wales will receive an extra £2.5billion and Northern Ireland £1.6billion.

Each nation receives additional funding linked to how much new spending is announced for England.

Rishi Sunak said he had delivered a budget for the whole country that showed the “indisputable” benefit of being part of the United Kingdom.

The Chancellor also committed to handing over £1million to secure the Extreme E off-roading race for Scotland, accelerated funding to boost Cardiff’s economy and financial resources for community cohesion in Northern Ireland.

Theatres, orchestras, museums and galleries were given a lift to the tune of £850million.

Mr Sunak said extra help was needed to get the struggling culture sector back on its feet after months of forced closures and lost revenues.

The Chancellor added: “Levelling up is also about protecting our unique culture and heritage.”

Some £2million will be used to start work on a new Beatles attraction on Liverpool’s waterfront.

Tax reliefs for the arts were due to end in March next year but will be extended to 2024.

The National Museum Directors’ Council welcomed the move and said that tax relief had already made a huge difference to the sector.