The Chancellor has won the nation over with his furlough and job retention schemes to support people and businesses during the UK’s fight against coronavirus. His generosity has won him the hilarious nickname of “Dishy Rishi” which he revealed his wife fnds extremely funny. Speaking at the Blue Collar Conservatism/Daily Express conference, Rishi Sunak told Esther McVey: “My wife has more chuckles about it than I do.

How is Boris Johnson handling the coronavirus crisis? Vote in our poll

“I think more important than that, what’s important in politics is if we’re doing things that you can try and connect with the people that we have the privilege to represent.

“We can sit in these offices and come up with policies, but unless we can communicate them to everyone in the country and makes them feel that they’re relevant to their everyday lives, then we’re not doing our job properly.”

The Chancellor announced his new scheme last month which will replace the furlough initiative, set to stop by the end of October. 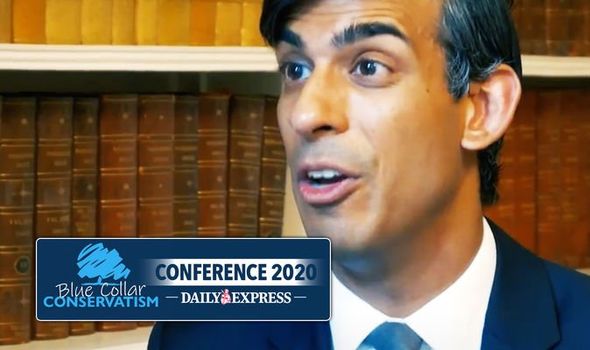 By November, Mr Sunak’s job support scheme will come into force and run for six months, he announced. Under the scheme, the Government will subsidise the pay of employees who are working fewer than normal hours due to lower demand, applying to staff who can work at least a third of their usual hours.

While employers will pay staff for the hours they do work, the Government and the employer will pay a third each of the hours not worked.

This means the Government now covers just 22 percent of employee wages up to the cap of £697.92.

Mr Sunak has received praise from some during the pandemic.

ITV Good Morning Britain host Piers Morgan, who has been critical of the Government’s handling of the pandemic, tweeted last week: “I wish this guy (Mr Sunak) was Prime Minister.

“Smart, confident, authoritative, empathetic, realistic & with a great grasp of detail. He’s in a totally different league to Boris Johnson or any other Govt minister.”

Mr Sunak is also believed to have “saved” the nation from a second coronavirus national lockdown.

New restrictions came in last month requiring pubs and restaurants to close at 10pm each day and mandating table service.

However the Government had been considering a full second lockdown which would have included measures like banning people from socialising around each other’s houses.

According to The Sun this plan was blocked as the Prime Minister feared it would cause Rishi Sunak to resign as Chancellor.

The paper reported Mr Sunak demanded a face-to-face meeting with Mr Johnson and explained he “wouldn’t wear it”.

A senior Tory commented: “There were fears he would find it difficult to carry on if he was ignored.

“It was all down to the Chancellor that we avoided delivering a hammer blow to the economy and took a more balanced approach instead. Rishi saved the day.”

Tune in at 6.30pm tonight for the big Blue Collar Conservatism debate