WASHINGTON — When Communist Chinese forces began shelling islands controlled by Taiwan in 1958, the United States rushed to back up its ally with military force — including drawing up plans to carry out nuclear strikes on mainland China, according to an apparently still-classified document that sheds new light on how dangerous that crisis was.

American military leaders pushed for a first-use nuclear strike on China, accepting the risk that the Soviet Union would retaliate in kind on behalf of its ally and millions of people would die, dozens of pages from a classified 1966 study of the confrontation show. The government censored those pages when it declassified the study for public release.

The document was disclosed by Daniel Ellsberg, who leaked a classified history of the Vietnam War, known as the Pentagon Papers, 50 years ago. Mr. Ellsberg said he had copied the top secret study about the Taiwan Strait crisis at the same time but did not disclose it then. He is now highlighting it amid new tensions between the United States and China over Taiwan.

While it has been known in broader strokes that United States officials considered using atomic weapons against mainland China if the crisis escalated, the pages reveal in new detail how aggressive military leaders were in pushing for authority to do so if Communist forces, which had started shelling the so-called offshore islands, intensified their attacks.

The crisis in 1958 instead ebbed when Mao Zedong’s Communist forces broke off the attacks on the islands, leaving them in the control of Chiang Kai-shek’s nationalist Republic of China forces based on Taiwan. More than six decades later, strategic ambiguity about Taiwan’s status — and about American willingness to use nuclear weapons to defend it — persists.

The previously censored information is significant both historically and now, said Odd Arne Westad, a Yale University historian who specializes in the Cold War and China and who reviewed the pages for The New York Times.

“This confirms, to me at least, that we came closer to the United States using nuclear weapons” during the 1958 crisis “than what I thought before,” he said. “In terms of how the decision-making actually took place, this is a much more illustrative level than what we have seen.”

Drawing parallels to today’s tensions — when China’s own conventional military might has grown far beyond its 1958 ability, and when it has its own nuclear weapons — Mr. Westad said the documents provided fodder to warn of the dangers of an escalating confrontation over Taiwan.

Even in 1958, officials doubted the United States could successfully defend Taiwan using only conventional weapons, the documents show. If China invaded today, Mr. Westad said, “it would put tremendous pressure on U.S. policymakers, in the case of such a confrontation, to think about how they might deploy nuclear weapons.”

“That should be sobering for everyone involved,” he added. 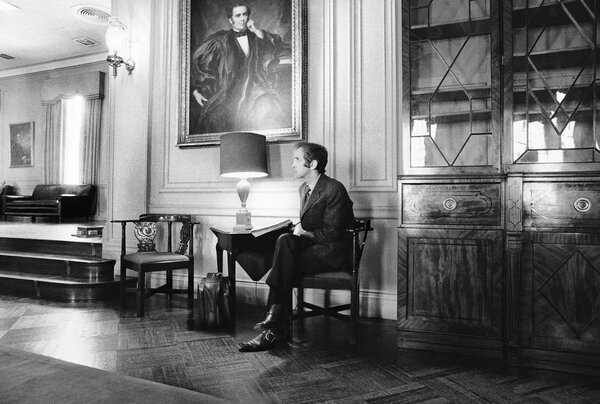 In exposing a historical antecedent for the present tensions, Mr. Ellsberg said that was exactly the takeaway he wanted the public to debate. He argued that inside the Pentagon, contingency planning was likely underway for the possibility of an armed conflict over Taiwan — including what to do if any defense using conventional weapons appeared to be falling short.

“As the possibility of another nuclear crisis over Taiwan is being bandied about this very year, it seems very timely to me to encourage the public, Congress and the executive branch to pay attention to what I make available to them,” he said about what he characterized as “shallow” and “reckless” high-level discussions during the 1958 Taiwan Strait crisis.

He added, “I do not believe the participants were more stupid or thoughtless than those in between or in the current cabinet.”

Among other details, the pages that the government censored in the official release of the study describe the attitude of Gen. Laurence S. Kuter, the top Air Force commander for the Pacific. He wanted authorization for a first-use nuclear attack on mainland China at the start of any armed conflict. To that end, he praised a plan that would start by dropping atomic bombs on Chinese airfields but not other targets, arguing that its relative restraint would make it harder for skeptics of nuclear warfare in the American government to block the plan.

“There would be merit in a proposal from the military to limit the war geographically” to the air bases, “if that proposal would forestall some misguided humanitarian’s intention to limit a war to obsolete iron bombs and hot lead,” General Kuter said at one meeting.

At the same time, officials considered it very likely that the Soviet Union would respond to an atomic attack on China with retaliatory nuclear strikes. (In retrospect, it is not clear whether this premise was accurate. Historians say American leaders, who saw Communism as a monolithic global conspiracy, did not appreciate or understand an emerging Sino-Soviet split.)

But American military officials preferred that risk to the possibility of losing the islands. The study paraphrased Gen. Nathan F. Twining, the chairman of the Joint Chiefs of Staff, as saying that if atomic bombings of air bases did not force China to break off the conflict, there would be “no alternative but to conduct nuclear strikes deep into China as far north as Shanghai.”

He suggested that such strikes would “almost certainly involve nuclear retaliation against Taiwan and possibly against Okinawa,” the Japanese island where American military forces were based, “but he stressed that if national policy is to defend the offshore islands then the consequences had to be accepted.”

The study also paraphrased the secretary of state, John Foster Dulles, as observing to the Joint Chiefs of Staff that “nobody would mind very much the loss of the offshore islands but that loss would mean further Communist aggression. Nothing seems worth a world war until you looked at the effect of not standing up to each challenge posed.”

Ultimately, President Dwight D. Eisenhower pushed back against the generals and decided to rely on conventional weapons at first. But nobody wanted to enter another protracted conventional conflict like the Korean War, so there was “unanimous belief that this would have to be quickly followed by nuclear strikes unless the Chinese Communists called off this operation.”

Mr. Ellsberg said he copied the full version of the study when he copied the Pentagon Papers. But he did not share the Taiwan study with reporters who wrote about the Vietnam War study in 1971, like Neil Sheehan of The Times.

Mr. Ellsberg quietly posted the full study online in 2017, when he published a book, “Doomsday Machine: Confessions of a Nuclear War Planner.” One of its footnotes mentions in passing that passages and pages omitted from the study are available on his website.

But he did not quote the study’s material in his book, he said, because lawyers for his publisher worried about potential legal liability. He also did little else to draw attention to the fact that its redacted pages are visible in the version he posted. As a result, few noticed it.

One of the few who did was William Burr, a senior analyst at George Washington University’s National Security Archive, who mentioned it in a footnote in a March blog post about threats to use nuclear weapons in the Cold War.

Mr. Burr said he had tried about two decades ago to use the Freedom of Information Act to obtain a new declassification review of the study — which was written by Morton H. Halperin for the RAND Corporation — but the Pentagon was unable to locate an unabridged copy in its files. (RAND, a nongovernmental think tank, is not itself subject to information act requests.)

Mr. Ellsberg said tensions over Taiwan did not seem as urgent in 2017. But the uptick in saber-rattling — he pointed to a recent cover of The Economist magazine that labeled Taiwan “the most dangerous place on Earth” and a recent opinion column by The Times’s Thomas L. Friedman titled, “Is There a War Coming Between China and the U.S.?” — prompted him to conclude it was important to get the information into greater public view.

Michael Szonyi, a Harvard University historian and author of a book about one of the offshore islands at the heart of the crisis, “Cold War Island: Quemoy on the Front Line,” called the material’s availability “hugely interesting.”

Any new confrontation over Taiwan could escalate and officials today would be “asking themselves the same questions that these folks were asking in 1958,” he said, linking the risks created by “dramatic” miscalculations and misunderstandings during serious planning for the use of nuclear weapons in 1958 and today’s tensions.

Mr. Ellsberg said he also had another reason for highlighting his exposure of that material. Now 90, he said he wanted to take on the risk of becoming a defendant in a test case challenging the Justice Department’s growing practice of using the Espionage Act to prosecute officials who leak information.

Enacted during World War I, the Espionage Act makes it a crime to retain or disclose, without authorization, defense-related information that could harm the United States or aid a foreign adversary. Its wording covers everyone — not only spies — and it does not allow defendants to urge juries to acquit on the basis that disclosures were in the public interest.

Using the Espionage Act to prosecute leakers was once rare. Mr. Ellsberg himself was charged under it, before a judge threw out the charges in 1973 because of government misconduct. The first successful such conviction was in 1985. But it has now become routine for the Justice Department to bring such charges.

Most of the time, defendants strike plea deals to avoid long sentences, so there is no appeal. The Supreme Court has not confronted questions about whether the law’s wording or application trammels First Amendment rights.

Saying the Justice Department should charge him for his open admission that he disclosed the classified study about the Taiwan crisis without authorization, Mr. Ellsberg said he would handle his defense in a way that would tee the First Amendment issues up for the Supreme Court.

“I will, if indicted, be asserting my belief that what I am doing — like what I’ve done in the past — is not criminal,” he said, arguing that using the Espionage Act “to criminalize classified truth-telling in the public interest” is unconstitutional.