Her Majesty’s Inspectorate of Constabulary and Fire and Rescue Services (HMICFRS) was called in to examine the force’s actions after women who attended the event on March 13 were bundled to the ground and arrested. People were accused of breaking lockdown rules by gathering in large groups to pay their respects to Sarah Everard, 33, who went missing before the police confirmed she had died, the week before.

While the report cleared the Met Police of wrongdoing in breaking up the vigil, saying officers remained “calm and professional”, it criticised the response of some politicians in the immediate aftermath.

While Home Secretary Priti Patel described the pictures of police clashing with members of the public as “upsetting”, she did not criticise the actions of officers, instead asking for a full report on the events that unfolded.

However, the London Mayor went further accusing the Met Police of a “neither appropriate nor proportionate” response.

He said: “The scenes from Clapham Common are unacceptable. 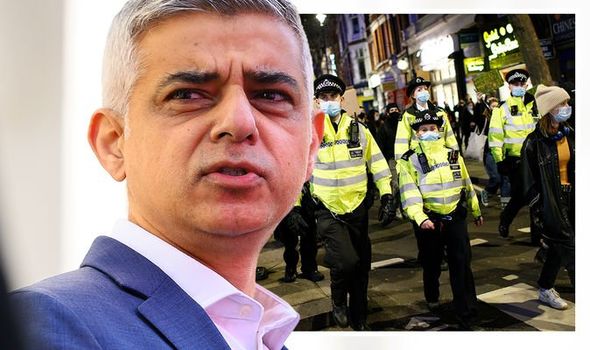 “The police have a responsibility to enforce Covid laws but from images I’ve seen it’s clear the response was at times neither appropriate nor proportionate.

“I’m in contact with the Commissioner & urgently seeking an explanation.”

He later said he was “not satisfied with the explanation” given by Met Police Commissioner Cressida Dick into the actions taken by officers at the event.

The watchdog said: “The chorus of those condemning the Metropolitan Police, and calling for the resignation of the Commissioner, within hours of the arrests – and presumably, with a very limited understanding of what had happened – was unwarranted. 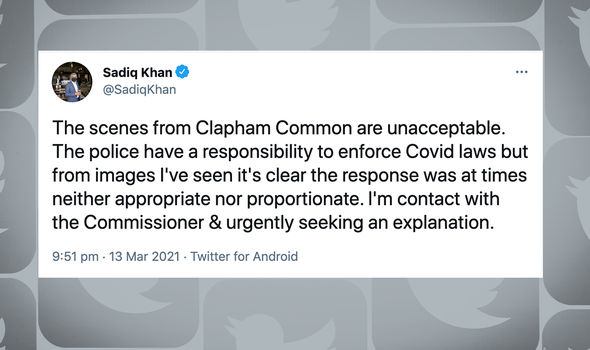 “Whereas a certain degree of uninformed commentary, particularly on social media, is inevitable, in this case some of the leading voices were those in positions of some responsibility.

“It is one thing – as in the case of the Home Secretary – to recognise that the scenes were worrying or upsetting (and to order an inspection such as this).

“It is another to jump to conclusions – and in doing so, undermine public confidence in policing – based on very limited evidence.

“To do so shows a distinct lack of respect for public servants facing, as we have described, a sensitive and complex situation.” 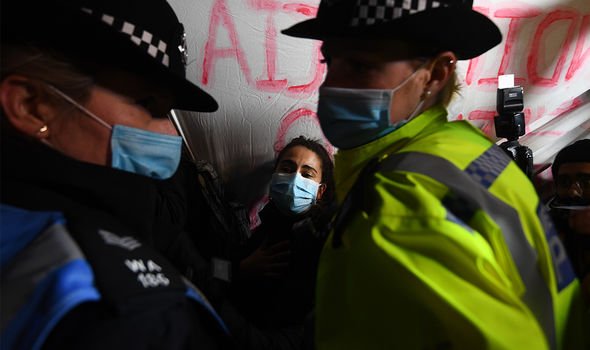 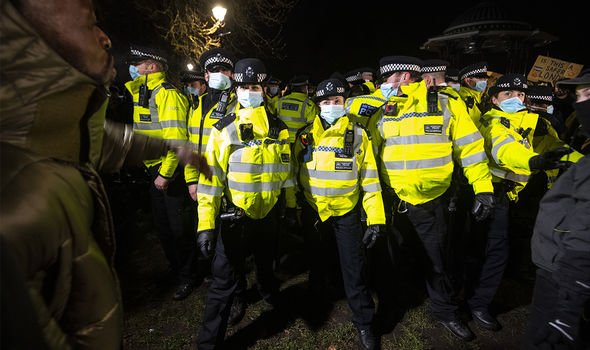 A Home Office spokesperson said Ms Patel was carefully looking at the findings of the report, and praised the police for their work through the pandemic.

The official said: “She recognises the police have done a difficult job throughout the pandemic and is grateful for their tireless work.”

The London Mayor said he accepted the results of the watchdog’s report but said it was “clear that trust and confidence of women and girls in the police and criminal justice system is far from adequate”.

He also defended his comments following the vigil saying it was his job “to stand up on behalf of Londoners and ensure that there is effective scrutiny of the Metropolitan Police”.

In a statement, Mr Khan said: “The tragic abduction and death of Sarah Everard has rightly caused huge anger and my thoughts and prayers remain with her family and loved ones.

“I completely understand why women, girls and allies wanted to hold a vigil to remember Sarah at Clapham Common and show solidarity with all women who have been subjected to violence at the hands of men.

“While I do not have operational control over the police, I called for the Government and MPS to find a way to allow the vigil to happen legally and safely in advance of Saturday 13 March, and was provided with assurances that the MPS would police it sensitively.

“It is my job to stand up on behalf of Londoners and ensure that there is effective scrutiny of the Metropolitan Police – particularly in the light of such widespread public dismay.

“I accept the HMICFRS report, but it is clear that trust and confidence of women and girls in the police and criminal justice system is far from adequate.

“The events of the weekend of 13/14 March have done further damage to this and show that much more needs to be done.”