Deputy Labour leader Angela Rayner was also on stage belting out the socialist anthem from the main stage.

A number of delegates also flew large red flags as the party celebrated its socialist roots.

Labour shares the song as its official anthem with the Japanese Communist Party and Kim Jong Un’s Korean People’s Army.

When Sir Tony Blair was leader of the Labour Party, he ditched the singing of the song to mark the end of conference. 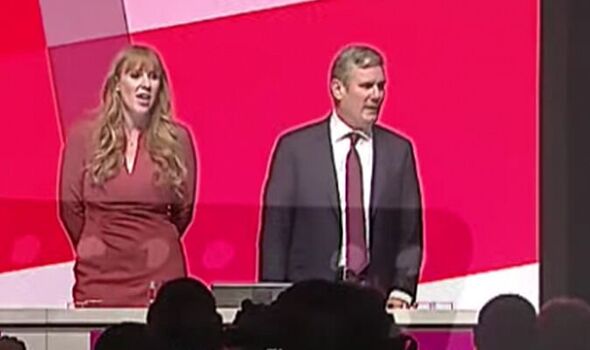 Yesterday Labour MP Clive Lewis caused a stir when he said he was “more comfortable” singing the Red Flag than the national anthem.

His comments came after Sir Keir led a rendition of the national anthem at the opening of the week.

It was the first time the anthem has been sung at a Labour Party conference and took place after a minute of silence following the Queen’s death.

He said: “They’ve never done it before, there’s never been any demand to do it.

“We don’t as a country routinely go around singing the national anthem at every single event we go to.

“We don’t sing in schools, we don’t have the raising of the flag as they do in the USA and other places. We are not that sort of, what I would call, excessively nationalist.”

A Labour source told Express.co.uk: “The fact everyone respected the minute’s silence and sang the anthem. That wouldn’t have happened a year ago.

“I think we’re all just happy with the way the whole conference has gone.”