Home » Politics » Sir Keir Starmer: ‘We’ve got a long way to go to win back voters’

He promised a “moral crusade” to tackle the in-equalities exposed by the pandemic and the creation of war-style recovery bonds to help the nation rebuild. But in a speech setting out his vision, Sir Keir admitted he has yet to make a big enough breakthrough with voters. He said: “I’m conscious that the Labour Party has a lot of work to do and we are determined to do it.”

He has faced criticism for not striding ahead in the polls despite the Government’s pandemic failings. His ranking in a “Who would make the best Prime Minister?” survey fell four points in a month to 27 percent yesterday.

Meanwhile, Boris Johnson climbed five points to 43 percent. The Savanta ComRes poll found 42 percent of voters would back the Tories in a general election, up a point. Labour remained on 37 percent.

Sir Keir said: “We can go back to the same in-secure and unequal economy that’s been so cruelly exposed by the virus, or we can seize the moment.”

The Bank of England has said the vast majority of savings built up during the pandemic won’t be spent.

And Sir Keir said: “I would introduce a new British recovery bond. This could raise billions to invest in local communities, jobs and businesses. It could help build the infrastructure of the future – investing in science, skills, technology and British manufacturing. 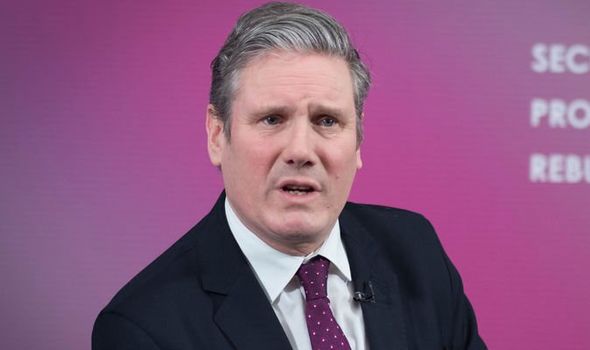 “It would also provide security for savers and give millions of people a proper stake in Britain’s future.”

Former shadow chancellor Ed Balls called on Sir Keir to stamp out attacks on Brexit. He said: “He needs to say to those people on the Labour side who say, ‘It’s all a disaster, we should go back into the European Union’ that that’s not going to work.”

But Mr Balls said the leader had a chance of winning if he set out a patriotic but ­outward-looking vision.

The Conservatives’ co-chair Amanda Milling said: “All Labour has to offer is others’ ideas, empty rhetoric and calling for things the Government is already doing.”