Home » Politics » ‘Staring at a wipeout!’ Tories back Boris but fears rising of huge upset in election 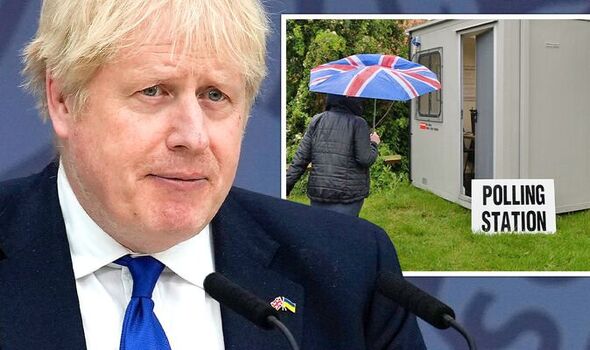 It comes as a poll for the Sunday Express by Techne has revealed that 55 percent believe the Prime Minister and his Chancellor Rishi Sunak should resign over the fines for breaking lockdown rules in Downing Street.

Insiders said that it was a decision to move to the right politically which has helped save the Prime Minister from another potential coup.

One senior Tory source said: “This week showed the importance of sticking to the people’s priorities.

“MPs have been pleased with the Number 10 reset. They can sense that change is happening, they have a voice, and they know the PM has a set of advisors who are on the side of the party.

“Whilst the noise was intense, this week the focus remained squarely on the historic announcement by the Home Secretary [on processing asylum claims in Rwanda].

“A key manifesto pledge has been met, we are showing voters/MPs we are serious about taking back control of our borders, and keeping the UK safe.

Our focus will always be the people’s priorities.”

Another aide said: “We have seen plenty of supportive messages from MPs who were, two months ago, ready to put in letters.

“These same members understand that things have moved on. What we have seen is real leadership. First in Ukraine, then in the Home Secretary/ Number 10 announcement that we are taking back control of our borders.

“There are many great issues that this government faces. I think the mood among MPs is… we have a team ready to rise to these challenges.

“We cannot downplay, especially for the 2019 intake, and Northern Research Group [of Conservative MPs] in particular, how important the Home Secretary announcement was. We can now, at last, say we have taken the steps required to control illegal migration. This was a huge issue in the last election; an issue we have now answered.”

However, Conservative backbenchers have told the Sunday Express that a bad set of results in the May local elections could see a challenge to his leadership.

One veteran Tory MP said: “We are staring at a wipeout. If it is really bad then colleagues will begin to panic about their seats. Voters are still angry about partygate.”

A former minister said: “It is hard to see how Boris can lead us into the next election.”

If he does step down p[olling by Techne revealed that Defence Secretary Ben Wallace is favourite to be the next Tory leader and Prime Minister with 16 percent ahead of Foreign Secretary Liz Truss 13 percent, Home Secretary Priti Patel 5 percent, and Deputy Prime Minister Dominic Raab and Chancellor Rishi Sunak both on 4 percent.

Mr Walaace’s support is strongest among Tory voters with 25 percent, but overall among all voters the favourite option is a Tory backbencher on 18 percent.

While Mr Subnak’s support has collapsed after revelations about his wife’s tax status, among Tory MPs support for Ms Patel is rising.

One said: “She is looking like the best option now that she finally appears to have done something about the Channel migrant crisis.”

Another noted: “Priti is a strong Brexiteer, she was one of the spartans who held out against Theresa May’s deal so she has a lot of credibility.”