European Commission vice-president Maros Sefcovic launched legal proceedings and gave the Prime Minister a month to back down. The eurocrat risks another flare-up of tensions between the UK and EU in our already fractious post-Brexit relationship. EU officials say Downing Street’s decision to delay the implementation of trade checks on supermarket goods being shipped from mainland Britain to the region is a breach of international law.

They argue it goes against what Prime Minister Mr Johnson agreed to as part of the Brexit deal’s Northern Ireland Protocol to avoid a hard border.

An EU official said: “It should come as no surprise that we are launching legal proceedings against the United Kingdom.”

A second insider added: “This is a second of violation of international law on the same issue.

“We think that is an enormous problem because there are real life issues behind all of this.”

They added: “”The UK must stop acting unilaterally, and stop violating the rules it has signed up to.

“What we need in order to implement the protocol is mutual trust and this kind of unilateral action that we see from the UK does not build trust.” 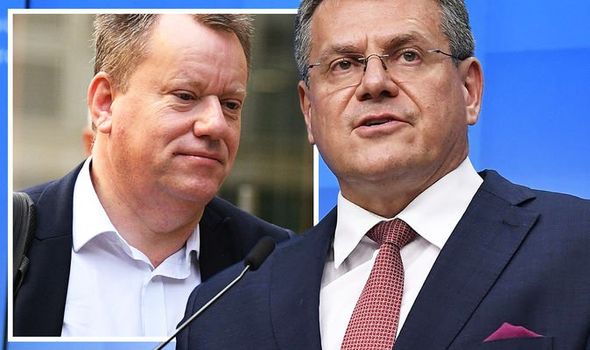 No10 insists its move is not a breach of international law and is necessary to give people and businesses more time to adapt to life under the post-Brexit border arrangements.

The Government has announced it will unilaterally suspend checks on supermarket products until October amid fears of food shortages in the region.

Mr Sefcovic will hold talks with Brexit minister Lord Frost in an attempt to resolve the row.

Eurocrats believe a possible solution could be for Britain to align to EU food and plant health rules to eliminate the need for trade checks on some products.

In his letter to Lord Frost, top eurocrat Mr Sefcovic wrote: “By its actions so far, not only has the UK not put in place all measures necessary for the implementation of the Protocol, but it has unilaterally decided, without any discussion or consultations with the Union in the bodies established by the Withdrawal Agreement, to ‘postpone’ the application of Union rules made applicable by the Protocol and in some cases, deviate from practical arrangements discussed in the framework of the Joint Committee for the implementation of the Protocol.”