President Trump had counted on his court nomination over the weekend to shift the election dynamic away from his handling of the coronavirus pandemic. But it has not reset the race in the key battleground state. 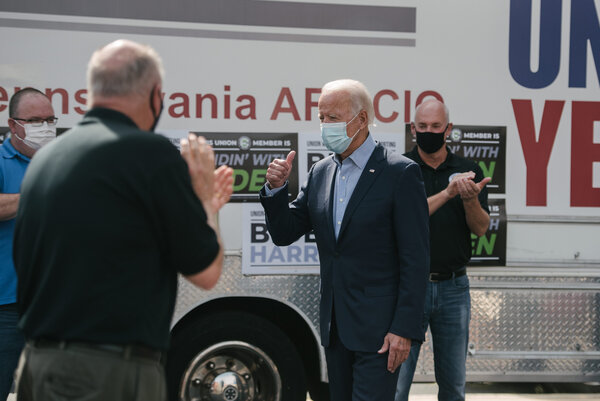 President Trump’s aggressive drive to add a conservative justice to the Supreme Court before Election Day has not helped him in Pennsylvania, a state crucial to his re-election, where more voters prefer Joseph R. Biden Jr. to fill the vacant seat, according to a poll by New York Times and Siena College released on Monday.

Mr. Biden led Mr. Trump, 49 percent to 40 percent, among likely Pennsylvania voters in the poll, which was conducted Friday through Sunday. On Saturday, Mr. Trump nominated Judge Amy Coney Barrett for the court seat and immediately flew to Pennsylvania to whip up support that night, speaking before a giant screen with the words “FILL THAT SEAT!”

But that prospect — which the Trump campaign is counting on to shift the election dynamic away from the president’s handling of the coronavirus pandemic — has not reset the race there. On the contrary, 51 percent of voters in the passionately divided battleground state said they trusted Mr. Biden more to pick the next justice, whereas 44 percent said that about Mr. Trump.

“I think the citizens of the United States should be picking out who will be the judge, but I would trust Joe Biden,” said Margarita Motta, 56, of Reading, Pa. “I will be voting for him.’’

Mr. Biden has not trailed in a public poll of Pennsylvania since June. But his lead narrowed over the summer as the state trended back toward tossup status, evoking memories of Mr. Trump’s slim victory there in 2016. The president has virtually no path to a second term without Pennsylvania’s 20 electoral votes. Mr. Biden could afford to lose the state, but only if he runs the table in other northern battlegrounds that Democrats narrowly lost in 2016 and picks up Arizona.