After 20 years of diplomacy and support, American officials are now contemplating the harrowing question of whether — and how — they might engage with a Taliban government in Afghanistan. 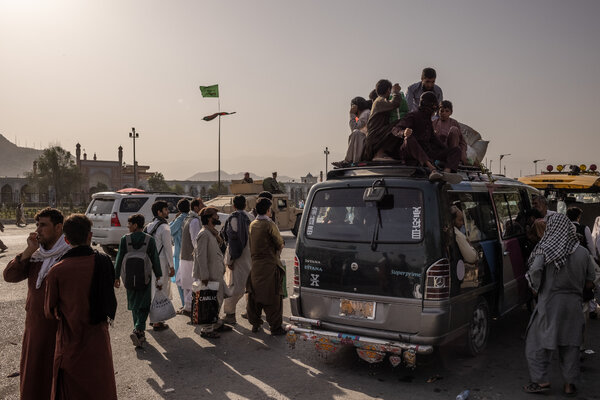 By Lara Jakes and Michael Crowley

WASHINGTON — The fall of Kabul on Sunday left the Biden administration facing the once-unthinkable prospect of whether, and how, to engage with a Taliban-led government in Afghanistan’s capital — or cede all influence in the country to an extremist group that brutalized Afghans and harbored Osama bin Laden as he planned attacks on America.

The sudden exile of President Ashraf Ghani of Afghanistan, just hours after President Biden and Secretary of State Antony J. Blinken each assured him of full American support, gives the Taliban little incentive to negotiate a transitional government for a country in crisis, said two U.S. officials involved in discussions inside the administration.

The officials said Mr. Ghani fled his country without telling his cabinet or leaving plans for a government handover. That has all but ensured the Taliban’s ascent to power — one that the Biden administration can only hope will be carried out as peacefully as possible.

It also likely extinguishes a long-stalled American effort for peace talks toward establishing a power-sharing system between the Taliban and Afghanistan’s elected leaders, and leaves U.S. officials hoping that a group that has defied nearly all pleas for moderation in recent months will protect some semblance of women’s and political rights and honor a pledge not to harbor Qaeda terrorists.

Mr. Blinken said the United States would support talks between the Afghan government and the Taliban “about the way forward.”

The chief American negotiator, Zalmay Khalilzad, was in Doha, Qatar, working with the United Nations and other international diplomats “to see if there can be a peaceful resolution going forward, a peaceful settlement, a peaceful transfer of power that would be good for the people of Afghanistan to avoid further bloodshed,” Mr. Blinken said on NBC’s “Meet the Press.”

One official said Mr. Khalilzad was working to get an agreement from Afghan leaders — including Abdullah Abdullah, the chairman of Afghan national reconciliation council, which was set up last year, and possibly Hamid Karzai, the former president — to start talks with Taliban negotiators. Both men are believed to be among the only Afghan officials left who have enough political standing to persuade the Taliban to discuss next steps.

But privately, Biden administration officials said they were facing a bitter reality of having little to no influence over a peace process that now appears to be little more than a negotiated surrender by a defeated Afghan government.

Representative Liz Cheney, Republican of Wyoming, blamed both the Biden and Trump administrations for what she called the “devastating, catastrophic real-time lesson” of withdrawing U.S. troops from a nation where a tenuous government depended on military assistance. But she had particularly sharp words for former President Donald J. Trump and his secretary of state, Mike Pompeo, who oversaw a February 2020 agreement with the Taliban to end the war.