Home » Politics » The Lost Hours: How Confusion and Inaction at the Capitol Delayed a Troop Deployment

WASHINGTON — At 1:09 p.m. on Jan. 6, minutes after protesters had burst through the barricades around the U.S. Capitol and began using the steel debris to assault the officers standing guard, the chief of the Capitol Police made a desperate call for backup. It took nearly two hours for officials to approve the deployment of the National Guard.

New details about what transpired over those 115 minutes on that dark, violent day — revealed in interviews and documents — tell a story of how chaotic decision-making among political and military leaders burned precious time as the rioting at the Capitol spiraled out of control.

Communication breakdowns, inaction and confusion over who had authority to call for the National Guard delayed a deployment of hundreds of troops who might have helped quell the violence that raged for hours.

This period is likely to be a focus of a congressional hearing on Tuesday, when lawmakers will publicly question Steven A. Sund, the Capitol Police chief at the time, and other current and former officials for the first time about the security failures that contributed to the violence on that day. 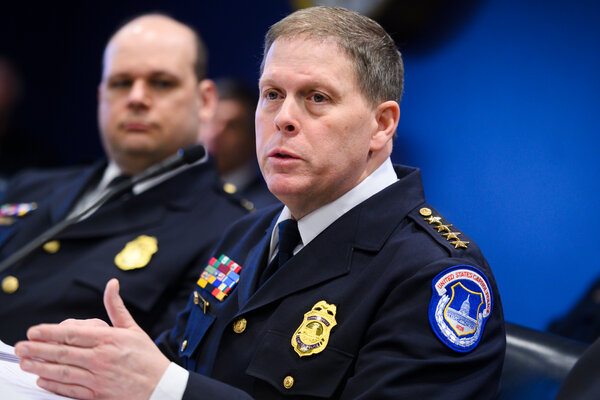 “Capitol security leaders must address the decision not to approve the National Guard request, failures in interagency coordination and information sharing, and how the threat intelligence they had ahead of Jan. 6 informed their security decisions leading up to that day,” said Senator Maggie Hassan, Democrat of New Hampshire.

Some American officials have said that by the time the urgent request came to the Pentagon on the afternoon of Jan. 6, it was long past the time National Guard troops could have deployed quickly enough to prevent the storming of the Capitol. But law enforcement officials pointed out that during a melee that lasted hours, every lost minute was critical.

Chief Sund did not hear back for 61 minutes after he called for help from the National Guard. And even then, there was a catch: Though Capitol security officials had approved his request, the Pentagon had the final say. During a tense phone call that began 18 minutes later, a top general said that he did not like the “visual” of the military guarding the Capitol and that he would recommend the Army secretary deny the request.

Pentagon approval finally came at 3:04 p.m. The first deployment of National Guard troops arrived at the Capitol two and a half hours later.

Video evidence and interviews show the Capitol Police and supporting police units were overwhelmed for several hours after the first members of the pro-Trump mob breached the outer perimeter of the complex.

One snapshot of the violence: At 4:25 p.m., rioters outside the Capitol building beat police officers using American flags. Two minutes later, a mob outside the House chamber dragged the first of two officers from the city’s Metropolitan Police down a flight of stairs. Elsewhere, on the Capitol grounds, one protester who collapsed in the crush of bodies was trampled by the mob. She was later pronounced dead.

“In every emergency, timing is important. In this particular case, when we’re talking about the Capitol, we’re talking about lives,” said Brian Higgins, the former police chief in Bergen County, N.J., and an adjunct professor at John Jay College of Criminal Justice.

Chief Sund made the urgent request for the National Guard to Paul D. Irving, the House sergeant-at-arms at the time, minutes after the gavel dropped to begin the solemn congressional ritual of certifying the presidential election results.

By then, just after 1 p.m., it had become clear to some Capitol security officials that the protesters could pose a threat to the lawmakers — and Vice President Mike Pence — gathered in the House chamber. But Mr. Irving said he needed to run Chief Sund’s request for National Guard troops “up the chain of command,” according to a letter the former police chief wrote to Congress this month.

Chief Sund said he anxiously waited to hear back from Mr. Irving or Michael C. Stenger, the Senate sergeant-at-arms, but heard nothing.

“I continued to follow up with Mr. Irving, who was with Mr. Stenger at the time, and he advised that he was waiting to hear back from congressional leadership, but expected authorization at any moment,” Chief Sund said in his letter.

Yet it appears that Mr. Irving, who had told Chief Sund days earlier that he did not want National Guard troops at the Capitol on Jan. 6 because of bad “optics,” waited 30 minutes after hearing from the Capitol Police chief before approaching Speaker Nancy Pelosi’s staff. Neither Mr. Irving nor Mr. Stenger, who both resigned after the riot, responded to multiple requests for an interview. Mr. Sund resigned on Jan. 7, after pressure from congressional leaders.

At 1:40 p.m., Mr. Irving finally approached Ms. Pelosi’s chief of staff, Terri McCullough, and other staff members in the Speaker’s Lobby behind the House chamber — the site where a Capitol Police officer would shoot a rioter an hour later. It was the first time Mr. Irving asked about permission to seek support from the National Guard, according to Drew Hammill, Ms. Pelosi’s deputy chief of staff.

Ms. McCullough immediately entered the room and passed a note to Ms. Pelosi with the request. Video from inside the chamber shows her approaching the speaker at 1:43 p.m. Ms. Pelosi approved the request and asked whether Senator Mitch McConnell, the Kentucky Republican who was then the majority leader, also needed to approve it. Ms. McCullough said he did, according to Ms. Pelosi’s office.

Ms. McCullough left the chamber to call Mr. McConnell’s chief of staff, Sharon Soderstrom, but could not reach her. She then reached Mr. Irving, who explained that he and Mr. Stenger were already meeting with the Senate majority leader’s staff in the office of the Senate sergeant-at-arms, according to Ms. Pelosi’s office.

It was at the meeting in Mr. Stenger’s office that Mr. McConnell’s staff first learned of Chief Sund’s request for the National Guard, according to a spokesman for the senator. In that meeting, aides to the congressional leaders, including Ms. Soderstrom, were perplexed to learn that the two sergeants-at-arms had not yet approved the request for troops, according to spokesmen for Mr. McConnell and Ms. Pelosi.

There was also confusion about whether approval from congressional leaders was needed to request National Guard troops. Mr. McConnell’s staff maintains that political leaders are not in that chain of command, and that security officials should have done so as quickly as possible. One former Capitol security official said the two sergeants-at-arms could have made the request themselves, but that even in an emergency, “common sense dictates” that they would want to consult with congressional leadership.

At that meeting, the frustrated congressional aides agreed that top Capitol security officials “should have asked for the National Guard’s physical deployment to protect the U.S. Capitol complex well in advance of Jan. 6,” Mr. Hammill said. “The speaker expects security professionals to make security decisions and to be informed of those decisions.”

Around this time, rioters smashed windows on the House side of the Capitol building and began climbing inside. Outside, the mob broke into chants of “Hang Mike Pence!” Others constructed a gallows with a noose outside the Capitol.

The riot inside the U.S. Capitol on Wednesday, Jan. 6, followed a rally at which President Trump made an inflammatory speech to his supporters, questioning the results of the election. Here’s a look at what happened and the ongoing fallout: