Home » Politics » The Russia Inquiry Ended a Democratic Lobbyist’s Career. He Wants It Back.

WASHINGTON — The collapse of Tony Podesta’s $42-million-a-year lobbying and public relations firm in 2017 amid a federal investigation shook K Street and rendered him toxic — a rare Democratic victim of the Trump-era scandals.

But that was only the beginning of his troubles.

Mr. Podesta, long an outsized character in the influence industry and Democratic fund-raising, turned to his enormous collection of modern art for solace and income. But when the pandemic sent the art market reeling, he sold the penthouse condo in Washington he had been using to show and sell his collection, and secured a loan from the government’s Paycheck Protection Program for struggling small businesses.

Discussions about consulting gigs and a return to a fund-raising circuit that had turned its back on him were halted by a combination of his declining income, pandemic restrictions and an infection from knee surgery that left him hooked to an intravenous antibiotic drip for months.

To top it off, he said, his email accounts and website were frozen after Chinese cyberthieves launched a wide-ranging phishing campaign using one of his domain names.

“It’s not been an easy time,” Mr. Podesta said in an interview, recalling a low point when he was being attacked on Twitter by former President Donald J. Trump and a television crew was on his block anticipating an indictment.

But the indictment never came.

Now Mr. Podesta is exploring a return to a landscape he once dominated.

“I don’t want to recreate what I had, but I sort of miss working, and art alone doesn’t sustain me, because I love politics,” he said.

The reception he gets could help answer some questions about life in Washington after Mr. Trump. Did the backlash to the open access-peddling and corporate influence of the Trump era result in brighter lines between corporate lobbying, fund-raising and governing? Or has the capital simply returned to the clubby culture in which lobbyist fund-raisers like Mr. Podesta held sway?

President Biden, who came to office with decades-long ties to Washington’s Democratic establishment, pledged not to accept campaign money from lobbyists or to allow them to serve in government agencies they had recently lobbied without a waiver. Nevertheless, he has drawn criticism from progressives and independent watchdogs for selecting former corporate lobbyists, consultants, lawyers and officials for a number of top administration posts, while lobbyists and consultants with close ties to his administration have capitalized on increased demand for their services.

Mr. Podesta, who has known Mr. Biden and some of his closest aides for decades, noted approvingly that the Biden campaign and the Democratic National Committee had accepted a combined $2,750 in donations from him last year, and that he had been welcomed at a virtual fund-raiser hosted by the campaign’s chairman, Steve Ricchetti, a longtime friend who once sold his lobbying firm to Mr. Podesta.

Mr. Ricchetti is now a counselor to Mr. Biden in the White House, while his brother Jeff Ricchetti, a former employee of Mr. Podesta’s lobbying firm, has seen his lobbying income increase significantly. 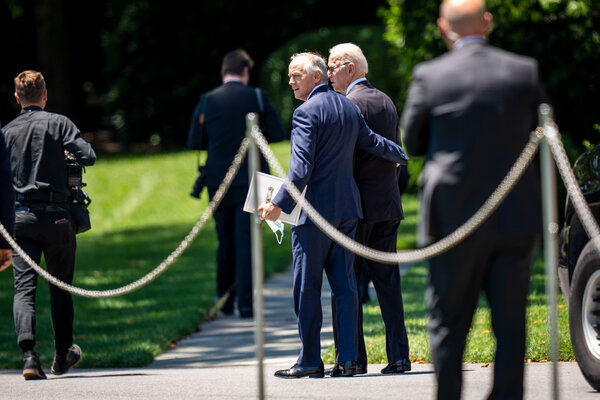 Mr. Podesta is not just any former lobbyist.

Over the course of three decades, he built one of the highest-grossing firms in Washington, representing companies and interests across industries and ideologies, including military contractors like Lockheed Martin and Boeing, big banks, a tobacco company, pharmaceutical makers and foreign governments including that of Hosni Mubarak, the authoritarian former Egyptian leader, Myanmar’s military junta and entities connected to the Saudi government.

His firm benefited from the perception that he had access to Democratic administrations and congressional offices — a perception enhanced by his fund-raising and personal connections to top Democrats. In 2016, Mr. Podesta donated or raised nearly $900,000 for the Democratic Party and Hillary Clinton.

Over the years, Tony Podesta became known for his flashy Italian suits and loafers and his pricey collections of art and real estate. At various times, he owned a Louise Bourgeois sculpture that was featured on the cover of the catalog for Sotheby’s prestigious contemporary art evening auction, as well as a three-bedroom condo in Manhattan’s Flatiron district and waterfront homes in Tasmania and Sydney, Australia; Venice, Italy, and the Northern Virginia suburbs of Washington — each adorned with sometimes provocative art from his collection.

While he sold the lakefront home in Northern Virginia in 2007, former neighbors still discuss an installation in his guest bathroom consisting of a closed-circuit video camera installed inside a toilet allowing users to observe their bodily processes from a unique angle.

His primary residence now, a 7,000-square-foot house in Washington’s Kalorama neighborhood, houses a rotating display of his art, as well a wine cellar with thousands of bottles.

The art and the real estate attracted wide attention during Mr. Podesta’s headline-grabbing divorce from his second wife, Heather, 26 years his junior, in 2014, which involved teams of lawyers.

His firm’s demise stemmed primarily from its involvement in one strand of the special counsel’s investigation. The firm took on a client with ties to Viktor F. Yanukovych, who was president of Ukraine, in 2012, but initially failed to register with the Justice Department under foreign lobbying laws and found itself in the midst of a tangled investigation involving the Republican lobbyists Paul Manafort and Rick Gates, who had worked for Mr. Yanukovych’s political party before joining the Trump campaign and becoming central targets of the investigation by the special counsel, Robert S. Mueller III.

Though Mr. Podesta’s firm had disclosed the client under less-detailed congressional lobbying rules and retroactively registered with the Justice Department, that did not stop the special counsel’s office from subpoenaing the records and employees of his firm and others that worked with Mr. Manafort and Mr. Gates.

Mr. Podesta questioned the motives and methods behind the special counsel’s investigation. He referred to one of the investigation’s lead prosecutors, Andrew Weismann, as “Inspector Javert,” the police character in Les Misérables who became obsessed with ensuring the capture and punishment of a parolee who had been convicted of stealing bread to feed his family.

“I didn’t even steal a loaf of bread,” Mr. Podesta said, asserting that he was targeted at least partly because the special counsel “thought it was a good idea to have a Democrat, clearly.”

Mr. Podesta said his firm’s finances were stretched thin, partly because it paid as much as $5 million in legal fees for employees who were subpoenaed by prosecutors, and partly because the investigation spooked clients, who left the firm.

Mr. Manafort and Mr. Gates were charged with unregistered foreign lobbying, tax fraud and other crimes in October 2017. The indictment identified the Podesta Group and a firm with which it worked on the Ukraine effort, Mercury Public Affairs, though not by name, as having worked as part of a “scheme” with Mr. Manafort and Mr. Gates to gain support for Mr. Yanukovych, while evading foreign lobbying disclosure requirements.

Within a day, the Podesta Group’s bank, citing the special counsel’s investigation and the draining of the firm’s accounts to pay the staff’s legal fees, canceled its credit line, rendering the firm illiquid, Mr. Podesta said.

He told his employees in a staff meeting that he was stepping back from the firm, citing attacks from Mr. Trump and his allies in the conservative media as making it “impossible to run a public affairs shop,” according to people in attendance.

The firm almost immediately began winding down. Mr. Podesta’s art was removed from its office walls and employees began leaving en masse, with a number of them banding together to start a new firm.

“We lost some clients over this, but the bank stuff was the killer,” Mr. Podesta recalled.

Months later, the special counsel referred the investigation of Mr. Podesta’s firm and Mercury to federal prosecutors in Manhattan. They conducted more interviews with lobbyists who worked on the Ukraine account, but informed Mr. Podesta, Mercury and their lobbyists in September 2019 that they would not be charged.

In the meantime, art had gone from being a hobby to a profession for Mr. Podesta, who sold the Bourgeois sculpture for $5.6 million. He had purchased it for $238,000 in 1994, he said, adding that he would have preferred to have donated it to the National Museum of Women in the Arts, to which he has made previous donations. That way, he said, “everyone could see it. Now it’s in some rich person’s home.”

He said, “In my life, I’ve donated a lot of more to museums than I’ve sold. In the last few years, I’ve probably sold more than I’ve donated.”

He continued paying his curator, Debra Corrie, whose salary had previously been paid partly by the firm. They relocated some of his art and their offices to a penthouse condo in Washington that Mr. Podesta bought for $2.6 million in 2018, where they showed the art by appointment.

Mr. Podesta said he was relying on art sales as his primary source of income, supplemented by Social Security and some investment income.

But when the pandemic hit, “the buyers all sort of left,” he said.

He sold the penthouse condo at a slight loss, unloaded his Flatiron district condo and secured a P.P.P. loan of nearly $43,000 to help cover his own salary, Ms. Corrie’s and that of a part-time employee, as well as rental fees and utilities at a professional art storage facility.

He said he did not think the loan ran afoul of the program’s mission of helping small struggling businesses. “Lots of people much bigger than I got loans,” he said, including Washington lobbying shops, high-priced law firms and special-interest groups like those with which he used to work.

Lately, he’s been operating his art dealership out of his Kalorama home, where his neighbors include the Obamas, and where he hosted a recent dinner for collectors and museum officials highlighting the works of Brian Dailey, a Washington-based visual artist whose work was featured in a Washington gallery show and on a monitor in Mr. Podesta’s kitchen.

Looking back at the investigation into his Ukraine lobbying that forced his exit from lobbying, he said “if I had known what I know now, I never would have taken this client,” adding “there were all sorts of places where errors were made, but there was no malice.”