Home » The Truth Is About to Set Liz Cheney Free

When Senator Joseph McCarthy was caught on national television pressing a case built on falsehoods against the supposed threat of communism in the U.S. Army, it was his breaking point.

Edward R. Murrow gave voice to a frustrated public as it awoke to the bamboozling, and McCarthy’s political career was done.

When President Donald Trump perpetrated the false narrative that his re-election had been stolen from him, leading his supporters into what became a fatal attack on the Capitol on Jan. 6, he was booted from Twitter and Facebook. But he didn’t lose most of his support.

And for the Republican Party’s rank-and-file, whose modern-day Murrow is Tucker Carlson, that falsehood is still the dominant narrative.

That fact is hitting home hard today for Representative Liz Cheney, the No. 3 Republican in the House, whose refusal to bow to Trump’s lies has put her on the brink of being purged from G.O.P. leadership. In a tweet on Monday, Cheney called out Trump and anyone promoting his stolen election narrative for “spreading THE BIG LIE, turning their back on the rule of law, and poisoning our democratic system.”

For House Republicans in thrall to a Trump-loyalist base, and who just weeks earlier had voted down an attempt to depose her, Cheney’s challenge to the story line was a bridge too far. The effort to remove her regained momentum, and today Representative Steve Scalise, the Republican whip, became the highest-ranking member of his party to publicly support Cheney’s ouster.

“This is not good for the party, certainly not good for a party that has had problems with suburban women, educated women — to go at somebody because they’re speaking what most of them know is the truth,” said Barbara Comstock, a former Republican congresswoman who represented a district in suburban Virginia until she was swept out by the anti-Trump blue wave in 2018. “Ronald Reagan, who is why I became a Republican, certainly allowed for dissent in his own party, and for people to be critical. I think it’s a very disturbing development.”

Representative Elise Stefanik, who hails from an upstate New York district, has emerged as the party’s choice to replace Cheney, and her own history works as a metaphor for what’s going on with the G.O.P. more broadly.

Stefanik flipped her district red in 2014, and she had amassed a relatively moderate record until her aggressive questioning of Democratic witnesses during Trump’s first impeachment trial, which earned her direct praise from him. She took his endorsement and ran with it, and in the past year-plus has become a staunch ally to his cause. She disputed the election results in Pennsylvania in a House vote on Jan. 6, and she later voted against impeaching him.

Her policies, of course, are another thing entirely. The 36-year-old Stefanik actually voted with Trump less often during his four years as president than Cheney did. Notably, she voted against his signature tax cut bill, which Republicans are now hastening to defend. 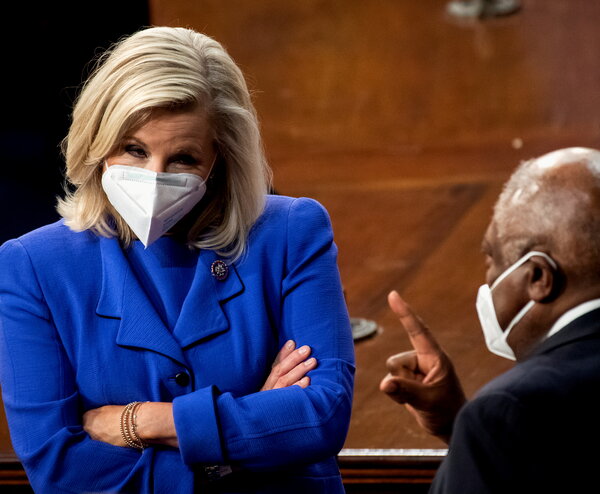 But the line that’s being drawn in the Republican sand isn’t about policy. It’s about loyalty to a narrative of Trump’s creation, and in G.O.P. primaries across the country, contravening can be fatal.

“The challenge is that members don’t want to be primaried,” said Glen Bolger, a veteran Republican pollster. “These seats are mostly drawn as Democratic or Republican seats, so the way to lose isn’t in November, it’s in a primary.”

Still, he added, “the difference between being a majority or a minority is decided in November. But politicians, understandably so, think of themselves first, and what’s good for me is good for the party.”

In Texas, a primary election last weekend in a suburban House district set up a confrontation between the two wings of the party. A Trump-backed Republican, Susan Wright, won nearly 20 percent of the vote, while Jake Ellzey, a Republican who has the endorsement of former Gov. Rick Perry of Texas, came in second place. The two candidates now advance to a runoff, and here’s the rub: All the district’s voters will be eligible to participate, not just Republicans.

In the Senate, most Republican lawmakers have done their best to look away from the 211-car pileup taking place in the House Republican Conference, and have mostly moved on from discussions of the 2020 election. But there’s far less willingness to do so among House Republicans, whose every-two-year election cycle keeps them in closer conversation with the party’s base.

And a flamboyant coterie of relatively young Republican lawmakers in the House has begun to emerge, led in part by Representative Jim Jordan of Ohio, a frequent presence on Fox News and prominent Trump ally, who has helped put Stefanik in position for her ascent.

Just a month ago, Cheney seemed to have survived the attempt on her political life; her allies in the Wyoming state legislature beat back an effort to change election rules that would have imperiled her in the 2022 primary. The former Republican speakers Paul Ryan and John Boehner committed to helping her fund-raise.

Cheney had decided against a run for Senate last year because she saw an auspicious future in the House leadership, possibly even as speaker.

But now she finds herself at odds with a party whose leader is silent in the press but still a fan favorite among the party faithful. “A guy who got 47 percent is not the future of our party,” Comstock said, referring to Trump’s total in the 2020 election. “The toxic personality divided our country and is now dividing our party.”

On Politics is also available as a newsletter. Sign up here to get it delivered to your inbox.

Is there anything you think we’re missing? Anything you want to see more of? We’d love to hear from you. Email us at [email protected].