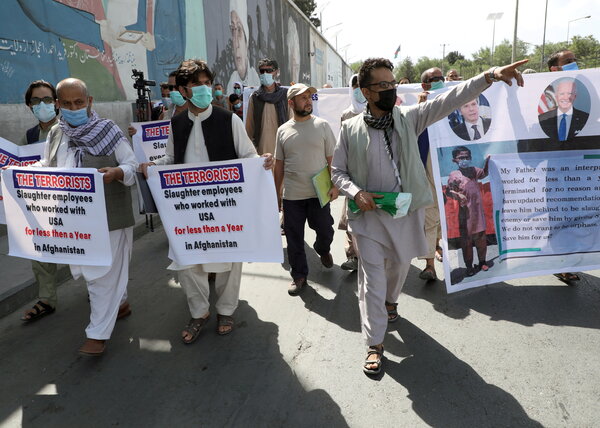 The Biden administration will begin “Operation Allies Refuge” in the last week in July to support the airlift of Afghan nationals who aided the United States and are endangered by the withdrawal of U.S. troops, administration officials said on Wednesday.

Critical details of the initiative — such as who would ultimately be eligible for evacuation, what role the U.S. military would play and where evacuees will be sent — are not likely to be made public until the operation in complete, said Jen Psaki, the White House press secretary.

The move comes following an outcry among interpreters who worked with U.S. officials and amid growing criticism of Mr. Biden’s policy at home, most notably from former President George W. Bush, who ordered the invasion of Afghanistan following the Sept. 11, 2001, terrorist attacks. Mr. Bush has argued that the pullout will lead to a geopolitical and humanitarian crisis.

“I am afraid Afghan women and girls are going to suffer unspeakable harm,” the former president said in an interview on Wednesday. “They are scared.”

Afghans wishing to participate needed to already be in the “pipeline” of the State Department’s Special Immigrant Visa program, said the administration official who announced the mission, adding that it would be limited to those who “supported the United States and our partners in Afghanistan.”