The Sophy Ridge on Sunday presenter repeatedly challenged Ms Coffey on whether the Prime Minister was aware of claims made against the former deputy chief whip before he was appointed. Ms Ridge was forced to ask on several occasions if Boris Johnson had been informed of the allegations, with the Work and Pensions Secretary failing to provide her with a straightforward answer. Ms Coffey insisted the Prime Minister was not aware of any specifics claims before Mr Pincher was appointed to the senior position.

Ms Ridge questioned the language employed by the Tory frontbencher to outline Mr Johnson’s knowledge of the allegations, saying “I don’t understand that sentence” as she asked for clarifications on several occasions during the interview.

She then suggested Ms Coffey “think you can wiggle out of it” as she once again challenged the Work and Pensions Secretary to explain clearly how much awareness there was within the party about Mr Pincher’s situation.

Ms Ridge said: “Why don’t you ask? I get perhaps it’s easier to just to be able to come on these programmes and say, ‘look, I don’t know’, but surely you must ask to try and find out, that’s the first thing most people would do.

“When did the Prime Minister know? – so when I am asked this question I can give the answer.”

JUST IN: Everyone in the UK must change their passwords today – shock new warning issued 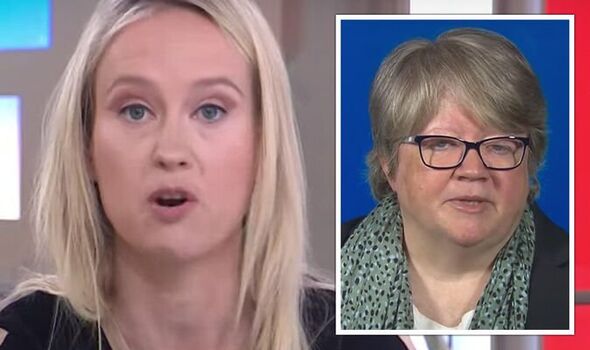 Ms Coffey said she had outlined what happened and reiterated action had been taken against Mr Pincher.

After Ms Ridge apologised for interrupting her again in a bid to gain clarity from the minister, Ms Coffey replied: “You don’t need to apologise, I’m just going to give you the same answer Sophy.”

The former deputy chief whip offered his resignation on Tuesday after claims emerged suggesting he had groped two men whilst heavily intoxicated.

In his letter of resignation, Mr Pincher admitted he had drunk “far too much” the prior evening.

Ms Coffey said: “I don’t know about any individual conversations.

“It’s been suggested there was a discussion, a referral to Pet (propriety and ethics) – which happens with all ministerial appointments, there’s an element of a bit of vetting that goes on – but ultimately the decision is that of the Prime Minister.

“I’m not part of those individual conversations.

“Chris had served in Government before and had been a minister elsewhere, so I’m not aware that there was anything that was brought to the attention of the Prime Minister to make that change.”

Mr Johnson bowed to pressure after a complaint about the MP was made to Parliament’s watchdog that examines allegations of bullying, harassment, or sexual misconduct.

Mr Pincher dramatically quit as Tory deputy chief whip after a drunken incident in which he allegedly groped two guests at a London club.

The Prime Minister had been resisting calls to go further and remove the whip, meaning the Tamworth MP would sit as an independent in the Commons.

But on Friday, the action was taken after a formal complaint was made to the Independent Complaints and Grievance Scheme (ICGS).