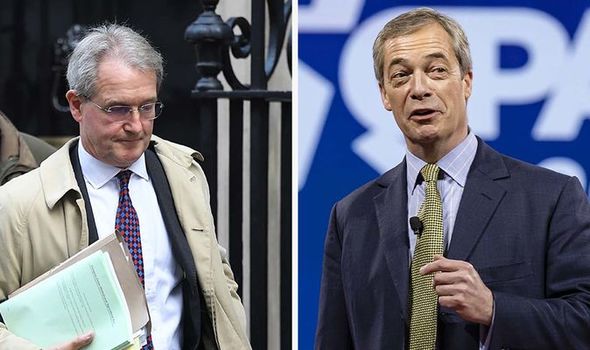 The former Brexit Party leader who is now a presenter on GB News spoke to the Express just as Mr Paterson announced he would resign as MP for North Shropshire. It followed a Government U-turn to allow MPs to vote on Mr Paterson being suspended for 30 days after the Standards Commissioner had concluded he had broken lobbying rules in his work for Randox.

A vote on Wednesday postponed any suspension until a new investigation and process could be set up and taken place.

This followed Mr Paterson complaining that he had been found guilty before the investigation started and 19 witnesses he put up had not been interviewed.

There was also no appeal process.

However, ministers U-turned after Labour and the SNP said it would not work with the Government on a new disciplinary process and there was a public backlash against the Government whipping MPs to vote to protect Mr Paterson.

Speaking to the Express, Mr Farage said: “He [Owen Paterson] came on my [GB News] show on Sunday and that was good because it gave him the chance to say what he had to say.

“Now the question about due process, that is a reasonable question.

“But it looks like the Government have misread this horribly. Horribly.”

While resigning as an MP Mr Paterson said: “The last two years have been an indescribable nightmare for my family and me.

“My integrity, which I hold very dear, has been repeatedly and publicly questioned.

“I maintain that I am totally innocent of what I have been accused of and I acted at all times in the interests of public health and safety.

“I, my family and those closest to me know the same. I am unable to clear my name under the current system.”

The North Shropshire seat will now face a hotly contested by-election with Labour set to make Tory sleaze the main line of attack.