ORLANDO, Fla. — One month after Donald J. Trump left office, thousands of his conservative allies and other far-right leaders on Friday began trying to center the Republican Party around the grievances of his presidency, pushing false claims about the American voting system, denouncing what they called liberal cancel culture and mocking mask-wearing.

Gathering at the first major conference of pro-Trump conservatives since his defeat, the politicians and activists sought to affirm their adherence to a conservatism as defined by Mr. Trump, and the need to break with many of the policies and ideas that had animated the American right for decades.

Some speakers at the event, the annual gathering of the Conservative Political Action Conference, went as far as to declare the traditional Republican Party all but dead. Gov. Ron DeSantis of Florida, who is seen as a possible candidate for president in 2024, vowed that conservatives would never return to “the failed Republican establishment of yesteryear.” Others firmly asserted Mr. Trump’s standing as the party’s leader and waved off the talk among some Republicans about moving on from the former president.

The line earned the loudest applause of the conference’s events on Friday morning, the start of a three-day affair that will culminate with a speech by Mr. Trump on Sunday afternoon.

To the extent the speakers addressed policy at all, it was to stake out hard-line positions on China, immigration and, to a degree, the laissez-faire economic policies that had allowed tech giants like Amazon, Facebook and Google to amass so much power.

But the conference’s opening-day agenda was anchored chiefly in grave warnings about an impending breakdown of American society at the hands of “woke mobs” and “Marxist leftists”; complaints about censorship of conservatives; a false insistence that the 2020 presidential election had been “rigged”; and a suspicion of anyone who did not share their resolve to fight back and stand with Mr. Trump.

‘Not as Nice as Cancún’: Cruz Jokes About Controversial Trip

At the Conservative Political Action Conference in Orlando, Fla., on Friday, Senator Ted Cruz of Texas made light of his recent trip to Cancún, Mexico, which drew criticism as he fled the state during a deadly winter storm.

I got to say, Orlando is awesome. It’s not as nice as Cancún. But it’s nice. And I got to say, what an amazing array of speakers here at CPAC. For a second there, I thought we were in Des Moines. 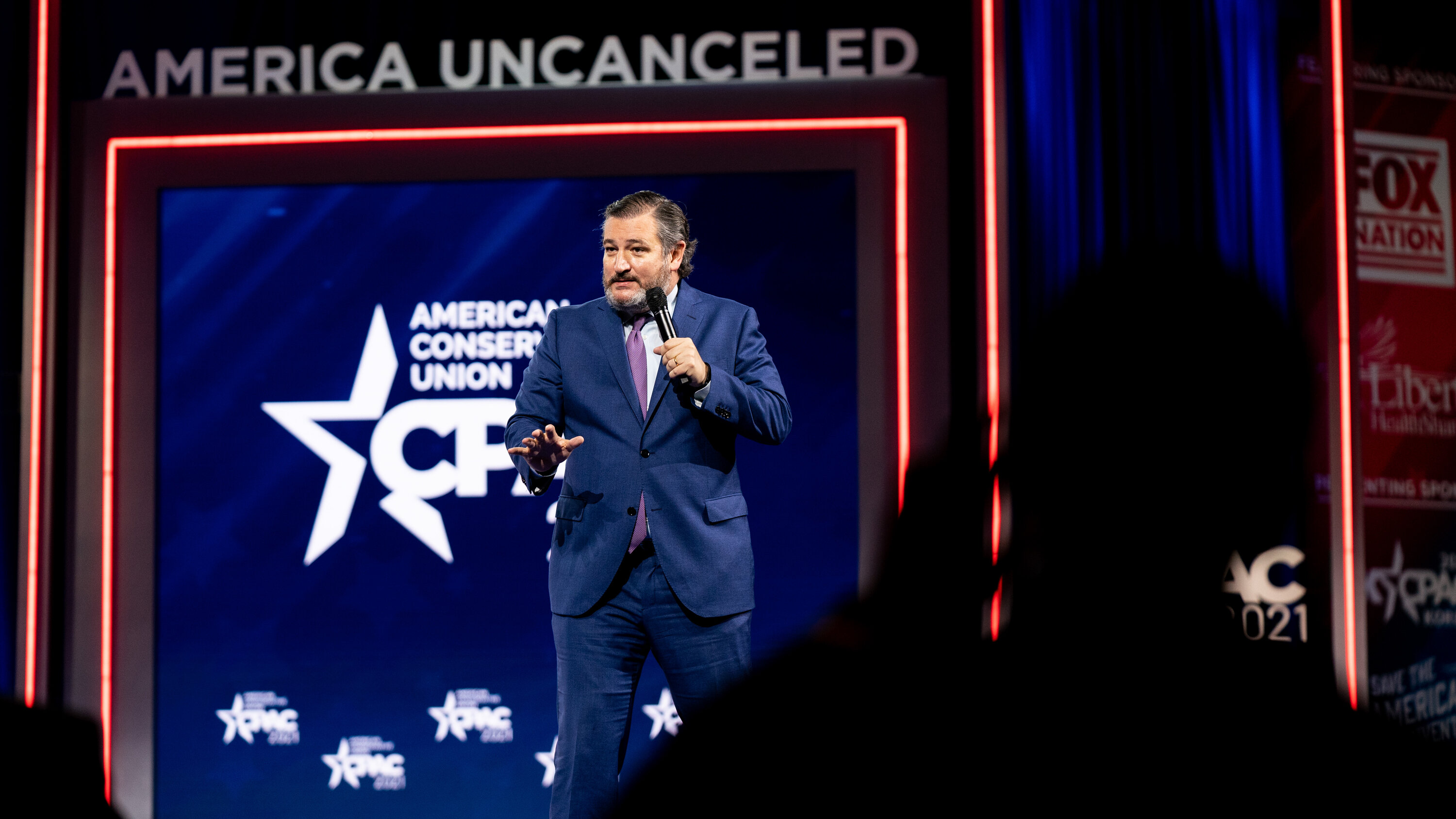 As the conference got underway, Democrats in Washington neared a House vote on a coronavirus relief package worth nearly $2 trillion that has blanket Republican opposition. Yet even as the House minority leader, Kevin McCarthy, sporting a “No Pelosi Payoffs” button, railed against the measure in the Capitol on Friday, there was scant mention of it or anything else related to President Biden’s agenda.

The Republican speakers, instead, won applause by focusing on the themes that animated the party during Mr. Trump’s presidency — the us-versus-them politics, the preoccupation with personality over policy — all while scarcely even mentioning Mr. Biden’s name.

It was not until Donald Trump Jr. and his girlfriend, Kimberly Guilfoyle, took the stage near the end of Friday’s sessions that anyone offered an extended critique of Mr. Biden’s first month in office. Yet the former president’s eldest son spent nearly as much time ridiculing Representative Liz Cheney of Wyoming, the third-ranking House Republican and a Trump critic, as he did confronting the current president.

“Liz Cheney and her politics are only slightly less popular than her father at a quail hunt,” said the younger Mr. Trump, a nearly 15-year-old reference to a hunting accident that didn’t quite land with the college students dotting the audience.

Other speakers used their time to belittle Senator Mitt Romney of Utah, who voted twice to impeach Mr. Trump, drawing laughs and applause.

After days of Republicans proclaiming there would be no civil war in the party, the attacks represented a stark reminder that Mr. Trump and his closest associates are determined to purge their critics.

If that was not clear enough from the rhetoric onstage in Orlando, the former president signaled his determination to exact vengeance by releasing a statement Friday afternoon announcing his support for a former aide, Max Miller, who is attempting to unseat Representative Anthony Gonzalez, an Ohio Republican. Mr. Gonzalez voted last month to impeach Mr. Trump.

“We represent the pro-Trump, America-first wing of the conservative movement,” declared Representative Matt Gaetz of Florida, who in January traveled to Wyoming to call for Ms. Cheney’s ouster. “Turns out populism is popular.” 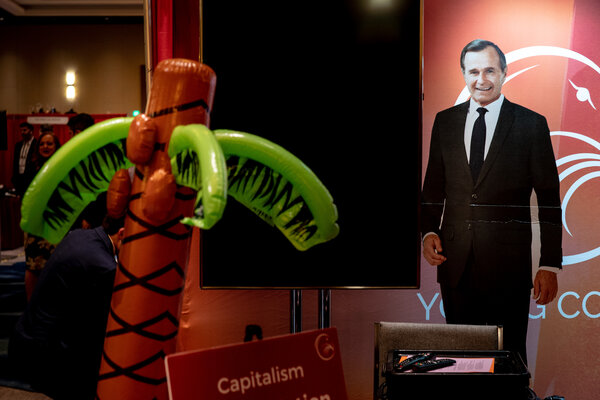 Mr. DeSantis suggested that the current threat posed by the left was too dangerous for conservatives to concern themselves with the finer points of policy.

“We can sit around and have academic debates about conservative policy, we can do that,” he said. “But the question is, when the Klieg lights get hot, when the left comes after you: Will you stay strong, or will you fold?”

For Republicans eyeing a presidential bid in 2024, Mr. Trump’s influence was deeply felt, with Mr. DeSantis, Mr. Cruz and others stressing their willingness to “fight.” It was unclear what, exactly, they were pledging to fight for, but everyone seemed to agree on what they were mobilizing against.

Senator Josh Hawley of Missouri had hardly finished reminding the audience that he had objected to the certification of Mr. Biden’s election before the crowd erupted in cheers and offered him a standing ovation. “I stood up, I said, ‘We ought to have a debate about election integrity,’” Mr. Hawley said.

Notably, though, Mr. Hawley used more of his speech to lash tech companies than he did to defend Mr. Trump or litigate the election.

“The Republican Party, once upon a time we were the party of trustbusters,” he said. “We invented the concept. It’s time to reclaim that legacy.”

Similarly, Senator Tom Cotton of Arkansas — another potential 2024 presidential candidate whose ambitions Mr. Trump could block — took aim at what he portrayed as the excesses of the left.

“There is no more pernicious threat to America than the rejection of our founding principles, and our heritage and our traditions,” he said, vowing to “never bend the knee to a politically correct mob.”

For all their base-pleasing rhetoric, though, Mr. Cotton and Senator Rick Scott of Florida, who also addressed the conference, were rewarded with only polite applause for their policy-oriented statements from an audience seemingly not ready to move on from last year’s election.

When Mr. Hawley attempted a riff on “Joe Biden’s America,” someone in the audience yelled: “Trump!”

For his part, Mr. Cruz used much of his speech to focus on a more pressing matter: damage control.

His appearance came just days after he traveled to Cancún, Mexico, for a vacation in the midst of a deadly snowstorm in Texas, and Mr. Cruz tried to defuse the controversy with humor.

“I got to say, Orlando is awesome,” he said while opening his speech. “It’s not as nice as Cancún — but it’s nice!”

Mr. Cruz had been roundly criticized by prominent Democrats for abandoning his constituents in a time of strife. But among Friday’s attendees, the moment made for a winning laugh line.

In an address titled “Bill of Rights, Liberty and Cancel Culture,” Mr. Cruz urged the left and the media to “lighten up” about many of the issues that have defined America in the past year.

Shortly before Mr. Cruz’s speech, CPAC organizers had been jeered by the audience when they paused the program to plead with them to wear their masks. Still, Mr. Cruz went ahead in making fun of pandemic-era rules like mask-wearing in restaurants, and he also joked about the protests against police brutality that spread across major cities last summer, some of which became violent.

There had been no such demonstrations in Houston, he said, “because let’s be very clear: If there had been, they would have discovered what the people of Texas think about the Second Amendment and the right to bear arms.” Again, the audience laughed.

At previous incarnations of this convention, particularly in the aftermath of Republican losses, there were vows to return to first principles.

In an illustration of how Mr. Trump has transformed the party, however, there was strikingly little mention of curbing spending at a moment when congressional Democrats are moving to restore earmarks.

Similarly, the policy issues that were raised were more oriented around race and identity than the sort of Christian conservatism that once shaped the G.O.P. Abortion was barely mentioned, and there was little talk of sexuality, even though House Democrats passed a bill broadening L.G.B.T. rights on Thursday.

Mr. Gaetz did mock the decision to remove the gender prefix from the Mr. Potato Head brand. Yet even that reference was in the spirit of what he suggested was a more pressing issue. “Mr. Potato Head was America’s first transgender doll and even he got canceled,” he said.