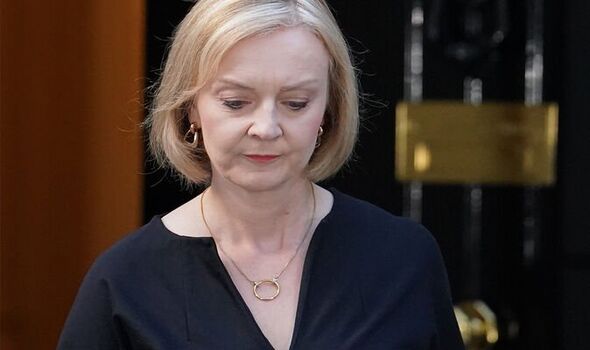 Dressed in all black, Prime Minister Liz Truss paid tribute to the “inspirational” Queen, saying: “We are all devastated by the news that we have just heard from Balmoral. The death of Her Majesty the Queen is a huge shock to the nation and to the world,” she said.

“It’s an extraordinary achievement to have presided with such dignity and grace for 70 years. Her life of service stretched beyond most of our living memories.

“In return she was loved and admired by the people in the United Kingdom and all around the world. She has been a personal inspiration to me and to many Britons – her devotion to duty is an example to us all.”

The Prime Minister led public figures at home and abroad in remembering the extraordinary life of the late monarch.

During her 70 year reign she oversaw Britain’s post-war recovery, the changing face of the Commonwealth, and the UK’s pandemic response.

Ms Truss added: “We are now a modern, thriving, dynamic nation. Through thick and thin, Queen Elizabeth II provided us with the stability and the strength that we needed.

“She was the very spirit of Great Britain – and that spirit will endure. She has been our longest-ever reigning monarch.

“It is an extraordinary achievement to have presided with such dignity and grace for 70 years. Her life of service stretched beyond most of our living memories. In return, she was loved and admired by the people in the United Kingdom and all around the world.”

Labour leader Sir Keir Starmer said his thoughts were with the Royal Family and that “the nation shares in their grief”.

In a statement, he said: “Above the clashes of politics, she stood not for what the nation fought over, but what it agreed upon. As Britain changed rapidly around her, this dedication became the still point of our turning world.

“So as our great Elizabethan era comes to an end, we will honour the late Queen’s memory by keeping alive the values of public service she embodied.

“For seventy years, Queen Elizabeth II stood as the head of our country. But, in spirit, she stood amongst us.”

Scottish First Minister Nicola Sturgeon described the monarch’s death as a “profoundly sad moment for the UK, the Commonwealth and the world”, while Welsh First Minister Mark Drakeford said he was “incredibly sad to hear of the passing of HRH Queen Elizabeth II”.

“I would like to offer my sincere sympathies and condolences to her children, and wider family as they come to terms with their grief.

“I wish to especially acknowledge the profound sorrow of our neighbours from within the unionist community who will feel her loss deeply.

“Personally, I am grateful for Queen Elizabeth’s significant contribution and determined efforts to advancing peace and reconciliation.”

Ms Truss was appointed her 15th Head of Government only on Tuesday. Her first Prime Minister was Sir Winston Churchill.

The new Conservative leader travelled up to the Queen’s Balmoral estate in Scotland on Tuesday to officially be asked to form a Government.

Traditionally the meeting would have taken place in Buckingham Palace, but Ms Truss flew to the Scottish highlands in order to cause as little discomfort to the Queen as possible.

The Prime Minister had a private audience with the Queen in the Drawing Room of the castle. The pair were then joined by Ms Truss’s husband, Hugh O’Leary for an informal conversation.

She met with Boris Johnson shortly before appointing the South West Norfolk MP as Prime Minister in order to accept his resignation.

Ms Truss was first briefed on concerns about Her Majesty’s health while in the House of Commons for an announcement on her energy plans.

Chancellor of the Duchy of Lancaster, Nadhim Zahawi, came into the Chamber, sat down next to the Prime Minister and began urgently speaking to her while she was listening to Labour leader Sir Keir Starmer’s response to her energy statement.

Sir Keir, too, was passed a note by his deputy Angela Rayner, with Commons Speaker Sir Lindsay Hoyle also handed a piece of paper updating him about the developing situation.

With Queen Elizabeth II having been a constant presence on the global stage for seven decades, world leaders expressed their own sorrow at her death.

“I remember her as a friend of France, a kind-hearted queen who has left a lasting impression on her country and her century.”

European Commission President Ursula von der Leyen described her as “a legend”, adding: “She has given to all of us in all these years, stability, confidence, she has shown an immense amount of confidence.”

Canada’s Justin Trudeau spoke on behalf of Canada in a statement, saying: “It was with the heaviest of hearts that we learned of the passing of Canada’s longest-reigning Sovereign, Her Majesty Elizabeth II.

“She was a constant presence in our lives – and her service to Canadians will forever remain an important part of our country’s history.”