Potential successors are in the wings. But the longer it takes for Gov. Andrew M. Cuomo’s fate to be resolved, the greater the headache for Democrats. 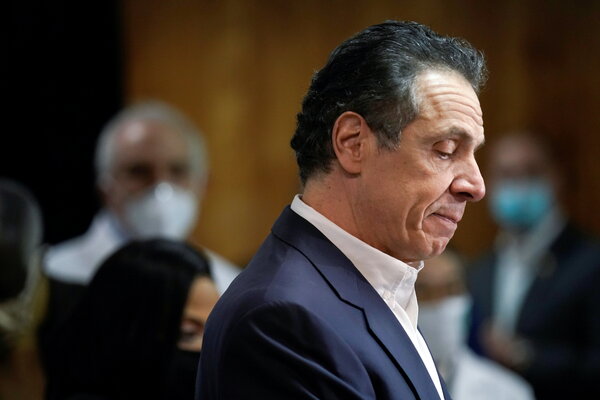 By Lisa Lerer and Katie Glueck

When an independent report declared last week that one of the nation’s most prominent Democratic leaders had sexually harassed 11 women, even some of his closest friends and oldest allies had finally run out of patience with Andrew M. Cuomo.

One by one, they dropped him. President Biden, House Speaker Nancy Pelosi and the highest-ranking members of Congress from New York issued a message that left no room for interpretation: The governor had to go.

The rapidity with which Mr. Cuomo has been cast out reflects not only how completely he alienated virtually every ally he once had, but also the possibility of political peril for a party that yoked its brand to the #MeToo movement during the Trump era, staking its reputation on a commitment to social equality and female empowerment.

Already, New York Democratic officials, activists and strategists have begun privately discussing around a half-dozen politicians capable of succeeding Mr. Cuomo, with some potential candidates or their allies starting to gauge interest and identify possible sources of support. They include several who national Democrats believe would easily win a general election in the lopsidedly Democratic state — among them women and people of color whose ascension to the governor’s office in Albany could burnish the party’s image for inclusiveness.

The turnabout in a few days’ time was whipsawing. Only a year ago a pillar of his party and the star of daily pandemic briefings, and still presumed by many to be the front-runner for a fourth term in 2022, Mr. Cuomo suddenly seemed eminently beatable, should he survive and persist with a campaign. And the political conversation crackled with the excitement and guesswork of an open race — with the guessing largely focused for the moment on whether Attorney General Letitia James, whose office released the independent report substantiating Mr. Cuomo’s misdeeds, would run for governor herself.

The longer it takes for Mr. Cuomo’s fate to be resolved, the greater the headache for Democrats.

Some Republicans have already used Mr. Cuomo’s situation to accuse Democrats of hypocrisy: In Virginia, the state G.O.P. called on Gov. Ralph Northam and the Democratic nominee to succeed him, Terry McAuliffe, to renounce Mr. Cuomo, saying “their silence is complicity.” In Congress, Senator Joni Ernst, an Iowa Republican, introduced a “Cuomo amendment” to prohibit federal infrastructure funding from being allocated to states led by governors who have sexually harassed their employees.

And Representative Lee Zeldin of Long Island, a prominent Republican contender for governor and an avid Trump supporter, has been able to focus his early campaigning on Mr. Cuomo rather than having to defend his fealty to the former president, an enormous liability in a state that Mr. Trump lost to Mr. Biden by 20 percentage points.

Representative Grace Meng of Queens, who served until January as a vice chair of the Democratic National Committee, suggested that party leaders had no patience for allowing the situation to fester, particularly as they continue to grapple with the challenges of the pandemic.

“We have midterm elections coming up, and we need to make sure that we are focused on maintaining the House and the Senate,” Ms. Meng said. “There’s just no room for distractions right now.”

Although Mr. Cuomo has given no indication that he plans to resign, dispatching his lawyers to mount an aggressive televised defense of his conduct, the State Assembly is moving quickly through an impeachment inquiry, raising hopes within the party that the governor’s future will be determined long before the midterm elections. Prosecutors from Long Island to Albany are pursing criminal investigations into the allegations of sexual harassment, raising the pressure on Mr. Cuomo to step down.