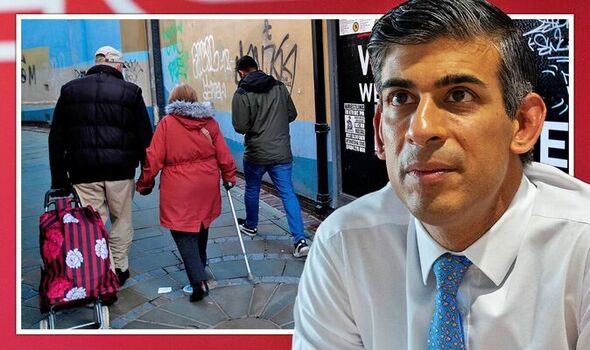 Britain’s economy could be left behind by more competitive international rivals unless Rishi Sunak’s government moves fast than its predecessors, a Conservative MP has said. John Penrose, MP for Weston-Super-Mare who is Competition Tsar said reforms to the government’s previously planned levelling up agenda are “even more urgent now than ever.”

In his advice to the Prime Minister, the MP said the current global economic climate meant the government has to shift its focus onto low-cost, pro-competition, supply side reforms.

It comes after the government withdrew its Levelling Up Bill last week after a backbench Tory revolt.

A rebel amendment, which seeks to abolish local house building targets, has grown in strength and numbers.

The original bill – which helped propel Boris Johnson’s Tories to power in 2019 – included promises such as town centre redevelopments outside of London and the South-East.

Speaking to Express.co.uk about what needs to be overhauled for the government to bounce back from failed targets, Mr Penrose said reforms were “urgent”.

He said: “When Rishi Sunak was Chancellor, he asked me for ideas to make British businesses more internationally competitive and to help with levelling up outside London and the southeast too.

“For the first 12 months we made good progress, but earlier this year momentum slowed. Now he’s back as Prime Minister, and we’ve got to get moving again.”

Mr Penrose released two reports, one of which, called Power To The People was released in 2020, focusing on the levelling up agenda.

He said: “Given the steadily-worsening global economic picture since Power To The People was published, with international prices and interest rates rising fast, these reforms are even more urgent now than ever.

“Just half the ideas have been done so far, and they’re probably the easiest ones too. But the others won’t cost taxpayers a penny and, with the Government needing to balance its books and reduce debt after three major economic shocks in 14 years, there’s much less firepower to spend or borrow our way out of trouble.

“So the low-cost, pro-competition, supply-side reforms which Power To The People recommends to unclog the arteries of our economy and turbocharge growth are the only workable alternatives left. The clock is ticking, and there isn’t a moment to lose.”

The MP is adamant a new competition bill must be introduced which will help reduce spiralling costs.

He added: “No matter whether Ministers decide to introduce all the necessary reforms in a single omnibus new Competition Bill or a series of smaller pieces of legislation instead, they need to be introduced immediately rather than in late 2023 or early 2024.

“Otherwise the benefits will arrive too late to help reduce spiralling energy bills for consumers and businesses alike (prolonging the period when taxpayers and borrowings will have to provide expensive subsidies as well), and will potentially be lost altogether in the hurly-burly of an approaching General Election campaign too.”

He said: “Given the (understandable but nonetheless real) delays caused by the pandemic and then Conservative Party leadership changes and associated Ministerial churn, the current Parliamentary session could easily last longer than was originally intended.”

“And since the list of planned new laws is fairly big already, there is now a significant risk that the Draft Competition Bill will not become law before the next General Election is called.

“This would create huge political uncertainty and regulatory risks, and condemn our previously-well-regarded competition authorities and regulators to working with one hand tied behind their backs, because they would have to continue using outdated and inadequate legal powers for years longer than planned.”