Home » Politics » We followed one Trump supporter from elation to resignation. 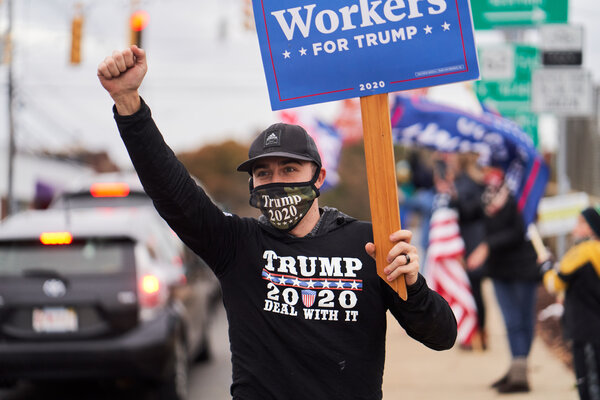 It was still summer when he got kicked off his town’s community Facebook page for his pugnacious pro-Trump posts. When someone stole the Trump sign from his yard, he replaced it with half a dozen new ones, one featuring an expletive.

At his wedding last month, guests sauntered out in oversize Donald and Melania masks, and he savored the discomfort of his wife’s Democratic relatives.

“The thing is, we don’t care,” Mr. Rocco said. He is looking forward to many years of Trump presidencies. “I hope Don, Ivanka and Eric all run eventually,” he said last week.

Mr. Rocco represents a notable category: young voters drawn into politics for the first time by Mr. Trump. He did not go to college and prides himself on his independent thinking; he puts himself in the category of street smart, not book smart.

He had never bothered to register to vote until 2016, when he first heard Mr. Trump debate on television, and saw a political figure who reminded him of himself.

“He doesn’t speak like a politician, he speaks like I do,” he said. “I can understand what this guy is saying. He’s talking like an American person talks. He’s not talking like a robot.”

He and his wife, Jenna, a 27-year-old nurse, went all in, organizing rallies and standing on roadsides. As the election and vote counting neared an end, daily check-ins with the Roccos found their moods shifting from excitement to foreboding.