But the Justice Department is not commenting on whether a seemingly off-the-cuff remark by President Biden is now a policy directive. 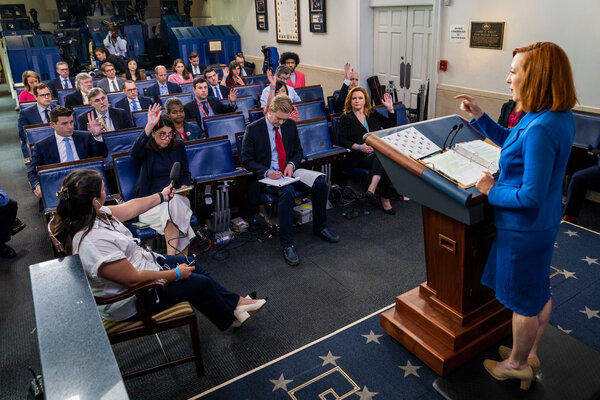 WASHINGTON — A White House spokeswoman appeared to confirm on Monday that the Biden administration would not permit federal prosecutors to seize reporters’ phone and email records in leak investigations, a potentially major change in law enforcement policy that President Biden promised in a seemingly off-the-cuff remark last week.

The Justice Department in recent weeks belatedly notified The Washington Post and CNN that under President Donald J. Trump, it had secretly subpoenaed their reporters’ communications records. Against that backdrop on Friday, a CNN reporter asked Mr. Biden whether he would prevent the department from going after journalists’ data.

After joking with the reporter, the president became serious, saying: “Absolutely, positively — it’s wrong. It’s simply, simply wrong. I will not let that happen.”

“It’s simply, simply wrong. I will not let that happen,” President Biden tells me about the Justice Department seizing the records of reporters. pic.twitter.com/bRL88NssMr

The unambiguous nature of the comment was significant because the Justice Department, under presidents of both parties, has recently used tools of legal compulsion, like subpoenas to phone companies, to hunt for reporters’ sources in leak investigations.

That raised the question of whether administration officials would try to walk back Mr. Biden’s statement — which he had made while chatting with reporters after a joint news conference with President Moon Jae-in of South Korea at the White House — to preserve flexibility for prosecutors if they thought it was necessary in a future leak investigation.

But at a news briefing on Monday, Jen Psaki, the White House press secretary, did not try to soften Mr. Biden’s declaration. She instead characterized the president as thinking that the Justice Department during the Trump administration had abused its power “to intimidate journalists.”