WASHINGTON — When Representative Marjorie Taylor Greene was expelled from her congressional committees as punishment for conspiracy mongering and violent statements, she embraced her exile, declaring that she had been “freed” from the obligation to participate in the drudgery of legislating.

“If I was on a committee, I’d be wasting my time,” said Ms. Greene, Republican of Georgia.

Since then Ms. Greene, locked out of the policymaking process, has instead devoted the first weeks of her term in Congress to disrupting House floor proceedings and trolling her colleagues on social media. She recently gummed up a string of straightforward procedural votes to advance gun control legislation and wasted hours of lawmakers’ time with dilatory tactics as the House worked to pass the far-reaching economic stimulus package, all the while building her inflammatory profile.

Ms. Greene may be something of an outlier, but her reaction to her exile illustrated a new reality that has taken hold in Congress, most vividly in the new ranks of Republicans. A growing number of lawmakers have demonstrated less interest in the nitty-gritty passing of laws and more in using their powerful perches to build their own political brands and stoke outrage among their opponents.

The trend has contributed to the deep dysfunction on Capitol Hill, where viral moments of Republicans trying to troll their colleagues across the aisle — often in the mold of President Donald J. Trump, who delighted in being disruptive, often on social media — generate far more attention than legislative debate.

“If your motivation is to keep your head down, work hard to pass legislation, it’s harder than it used to be,” Corry Bliss, a veteran Republican strategist, said in an interview. “It seems more and more, the rewards are skewed toward going on television and being bombastic.”

Democrats see a grimmer side to the tactics, particularly after the Capitol riot, with some arguing that the behavior of their Republican colleagues has fomented a dangerous political environment. On Friday, Representative Jimmy Gomez, Democrat of California, introduced a resolution to expel Ms. Greene from Congress, arguing that her past social media posts, including advocating Speaker Nancy Pelosi’s execution, disqualified her from serving.

“I believe some of my Republican colleagues, and one in particular, wish harm upon this legislative body,” Mr. Gomez said. “I’m not saying this for shock value. It’s the conclusion I drew after a member of Congress advocated violence against our peers, the speaker and our government.”

The shift has been particularly noticeable in recent weeks, as a string of leading Republican policy thinkers and deal makers — including Senators Rob Portman of Ohio, Patrick J. Toomey of Pennsylvania and Roy Blunt of Missouri, all former members of the House — have announced they will leave Congress. Their styles and records stand in sharp contrast to the new crop of lawmakers that appears to be more interested in waging culture wars than notching policy victories.

Representative Madison Cawthorn, a Republican freshman from North Carolina, told a colleague in an email reported by Time magazine that he had purposefully “built my staff around comms rather than legislation,” referring to communications.

Representative Lauren Boebert, a first-term Republican from Colorado who pledged to carry her pistol in the halls of Congress, upended a recent Natural Resources Committee meeting when she chimed in on Zoom, sitting in front of a backdrop of several rifles, to argue that lawmakers should be allowed to bring firearms to such gatherings.

On Tuesday, as Ms. Greene appeared on Newsmax, a conservative television network, to talk up an immigration bill she has proposed, which would ban “specifically illegal immigration” for four years, and to jab her “not so smart” Republican colleagues who voted to boot her off her panels.

At one point, the interviewer, Greg Kelly, wondered aloud about what Ms. Greene hoped to accomplish in Congress.

“Maybe the world has changed, and it’s not just about crafting a new law, it’s about — what?” Mr. Kelly asked. “Gaining influence so — I don’t know — in two years or a year or six months, something else can happen?”

“People are pushing back because it’s not the way things are normally done in Washington,” Ms. Greene replied. “But business as usual in Washington has led us here. So clearly, their way of doing things isn’t what works.”

It is hardly a new phenomenon for members of the minority party to relish roles as disrupters while they wait for their party to regain power. In the 1980s, Newt Gingrich, then a backbencher relegated to the Republican minority, made himself into a master of confrontation, weaponizing the new C-SPAN cameras that covered every minute of congressional debate to deliver scathing broadsides and doing little to hide his glee at the notoriety he was personally amassing.

“I am now a famous person,” he bragged to The Washington Post.

But Mr. Gingrich, who went on to become speaker after Republicans took the House in 1994, was also a thought leader in his party, and he came to prominence before social media had fundamentally changed the rhythms and mores of Congress.

Even now, most lawmakers’ efforts to gather power on Capitol Hill revolve heavily around their seats on congressional committees, with members jealously guarding their assignments on powerful panels and using their perches to divert funds back home to their districts. This year, at least one lawmaker tried to grease the wheels with actual prime cuts of meat to get a plum committee assignment, and lawmakers who land spots on the panel that controls government spending proudly put the designation in their Twitter bios: “Appropriator.” 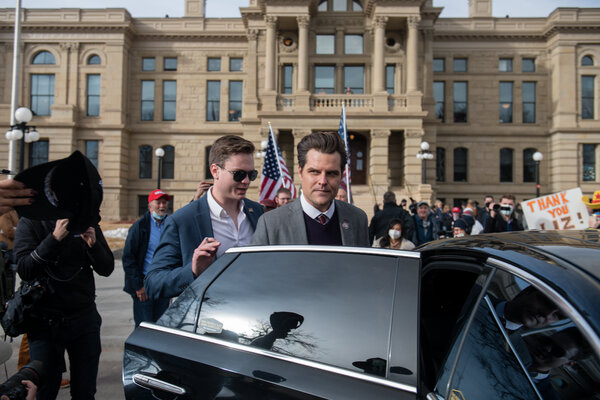 But the incentives for adopting Mr. Gingrich’s bomb-throwing style have only increased in recent years as primary election voters have gained increasing sway, and social media clout can be parlayed into small-dollar donations.

These days, those clamoring to be known as the next great Republican policy wonk or master legislator are in the minority, while there are plenty of conservatives who say they want to be their party’s answer to Representative Alexandria Ocasio-Cortez, Democrat of New York, a second-term progressive who has excelled at using social media to raise money and hurl barbs at political opponents.

While Ms. Ocasio-Cortez has used her platform to build support for a wide array of progressive policy priorities, those who emulate her may be more impressed with her nearly 13 million Twitter followers.

“RT & follow me please!” Ms. Greene tweeted in September, when she was running for Congress. “I want to catch up to the socialist Squad’s following!”

“They see Congress as a platform that will bring them fame and notoriety,” said Steve Israel, a former Democratic congressman from New York. “In the past, notoriety wasn’t of value, but with this crowd, it is. The more outlandish they can be on Fox, the more popular they become with the base.”

Ms. Greene has unapologetically pursued the strategy. She said her campaign raised $1.9 million after she was expelled from her committees and after a flood of reports highlighted her past violent and conspiratorial comments, including questioning whether the Sept. 11, 2001, attacks happened, and suggesting that Bill and Hillary Clinton had John F. Kennedy Jr. killed.

Ms. Greene said the controversy brought in more than a quarter-million dollars in 48 hours.

For comparison, Representative Ashley Hinson of Iowa, a fellow freshman Republican who ousted a Democratic incumbent in a tough race and was considered a strong fund-raiser, raised $1.6 million over a three-month stretch of her campaign.

“Why raise money to advertise on the news channels when I can make the news?” Representative Matt Gaetz, Republican of Florida, and the most vocal proponent of the influencer-legislator model, wrote in his book. “And if you aren’t making news, you aren’t governing.”

A number of Democratic lawmakers with sizable social media followings and popular brands have created a blueprint for others to aspire to, particularly Ms. Ocasio-Cortez and the so-called squad of which she is a part. Some have been the subjects of merchandisable memes that raise hundreds of thousands of dollars. Others are the subjects of glossy spreads in fashion magazines and are invited onto late-night talk shows.

But Democrats like Ms. Ocasio-Cortez and Representative Katie Porter of California have built their profiles in part by doing the less glamorous tasks involved in legislating. Both routinely generate viral internet moments from their seats on committee daises by tearing into prominent technology and banking executives.

Ms. Ocasio-Cortez is known to bring her social media followers along for the ride, explaining how she prepares for the hearings and polling them for questions she should ask. Ms. Porter and her whiteboard have become a pop-culture phenomenon.

Even Mr. Gaetz, who is unabashed about his laser focus on getting himself on television, has his pet legislative priorities, working across the aisle to end military conflicts abroad and restrict presidential powers to wage new ones.

For now, Ms. Greene’s work on the House floor appears to be limited to prolonging inevitable votes with parliamentary tactics, a drill she defended on Tuesday.

“It’s important to give Democrats and maybe some Republicans time to think before they’re actually voting on these things,” Ms. Greene said.

It is the sort of exercise that Mr. Blunt might have had in mind when he described why he no longer felt he had a place in Congress.

“I think the country in the last decade or so has sort of fallen off the edge with too many politicians saying, ‘If you vote for me, I’ll never compromise on anything,’” Mr. Blunt told reporters in Springfield, Mo., after he announced his retirement. “Rather than spending a lot of time saying what I’d never do, I’d spend more time saying what I’d try to do.’”