In times of crisis, the California chef Hanif Sadr learned to forage and preserve food, and use it to heal. 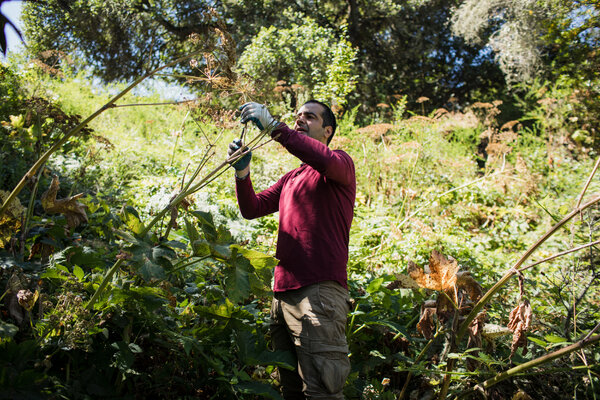 A FOREST IN THE BAY AREA, CALIF. — Moments after walking into a verdant forest in San Francisco’s East Bay, the chef Hanif Sadr nibbled on the vegetation he found there — canary yellow mustard flowers, then spicy wild radish flowers, streaked with white and purple. He tasted potently cool chocolate mint, and sniffed leaves from an intensely aromatic California bay laurel.

He grabbed a stalk of wild wheat and threaded foraged blackberries onto it like a skewer, a trick he learned as a child in the ’80s in Northern Iran. “I’d have stalks as tall as me, full of berries,” he said.

Back then, Mr. Sadr would wander the forest surrounding his family’s walnut and hazelnut farm in the Alborz mountain range, occasionally picking the blackberries for his grandmother’s jam or wild herbs for her tea.

Mr. Sadr, the chef and majority owner of Komaaj, a pop-up restaurant and catering company in Berkeley, Calif., first discovered these treasures in the summer of 2013, a little more than a year after arriving in the United States. He has been foraging there ever since. (There is a robust foraging community in the Bay Area, despite the practice being banned on public and private land.)

That summer, he worked as a camp counselor for a Persian language-immersion and nature school in El Cerrito, leading children on hikes throughout the East Bay. There, he found many of the same plants he foraged in Iran, like Persian hogweed (golpar in Farsi), which his grandmother would brew into pain-relieving tea when he was sick.

“Finding Persian hogweed was a turning point for me,” he said. “It helped me feel more at home here.”

A former material engineer in Tehran, Mr. Sadr came to California for a graduate program in sustainable energy. When the program was canceled, he stayed on at the Persian school as a cook, even though he had no prior kitchen experience. As he rode around on his bike searching for local ingredients, harvested produce from the school garden and brought food waste to his cooperative housing to compost or feed to the chickens, he learned that food was integral to sustainable living.

Mr. Sadr is ethnically Gilaki, one of three major ethnicities in Northern Iran, and he cooks Gilaki food, which he learned to do in 2015, when his family’s longtime cook in Iran came to visit California. Gilaki food is more rice-focused than the country’s other regional cuisines, with more rice-flour breads and pastries, and it uses more herbs and smoked foods. He opened Komaaj in June 2015 with five partners.

Earlier this year, before the pandemic, he was set to open three new projects: Calabash, a food hall in Oakland, with the chefs Azalina Eusope and Nigel Jones; Komaaj Kitchen at the Laundry, an event and gallery space in San Francisco; and a cafe at another event space in Menlo Park. The first two were delayed, and the last opportunity is gone. To keep Komaaj afloat during the pandemic, he began making a weekly family-style meal in his catering kitchen. 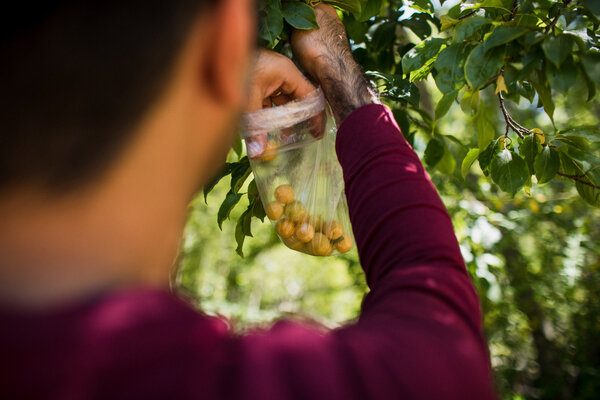 Feeling depressed, and finding himself with more free time, Mr. Sadr turned to hiking and foraging in March. It hadn’t helped that his wife, Goli Mohebi, has been stuck in Iran since 2017, barred from coming to the United States first by President Trump’s travel ban, and then by the pandemic, which delayed the visa process.

Mr. Sadr, who grew up in Tehran and in a rural part of Ramsar County while the country was at war with Iraq in the 1980s, said his experience of the scarcity of wartime has deeply informed his cooking during the pandemic. “We spent days and nights without water, no electricity,” he recalled.

He said that in a time of crisis, it’s common in Iran to gather and preserve as much food as possible.

“You cannot imagine what our mothers and grandmothers used to do during the war to preserve food, because at any moment things could run out,” he said. And so when the pandemic hit, he focused on preservation. He started Komaaj Preservation Lab, a project in which he preserves foods that are foraged or donated by locals with abundant gardens.

He uses traditional techniques for drying and blending tea, fermenting pickles and making jams with Iranian fruits and flowers, like orange blossom or borage. This helps him cut down food cost for the weekly meals he makes at Komaaj, keeps his employees working and gives him products to sell online and at Komaaj Kitchen at the Laundry when it opens.

Lately, he’s been making a lot of sour plum molasses for the lab, from fruit he forages in that same East Bay forest.

There, wild plum trees abound, heavy with fruit, green, yellow and red. The paths were sticky with their fallen, squished sisters. This is why he forages plums, he said: He can’t stand seeing food go to waste. He likes to set a blanket beneath a tree, gently shake the trunk, and retrieve the plums that fall.

In Iran, the women who worked on Mr. Sadr’s family farm foraged plums from the woods and slow-cooked them in copper pans over fire, first to soften the fruit and release the juices, and again to reduce the liquid and concentrate the flavors. They’d end up with a thick, sour paste that tastes like caramelized plum, an extra layer of flavor for stews, pickles and grilled meats.

Mr. Sadr’s sour plum molasses keeps for a year, allowing him to create meals for Komaaj like a chicken-and-plum stew made with prunes and apricots. The molasses also goes into his bieh, an herb and nut sauce he puts on roasted Italian eggplant halves for his take on bademjan kebab.

Every ingredient Mr. Sadr has foraged, preserved or cooked since the pandemic was also chosen for its health properties in accordance with Iranian traditional medicine, or I.T.M., a holistic practice that is thousands of years old and bears similarities to ayurveda and traditional Chinese medicine. This impulse, too, is rooted in his childhood in Iran: When crisis strikes, it’s common to see Iranian cooks turn to I.T.M., he said.

Followers of I.T.M. believe that ingredients can make a body hot or cold, and most meals focus on balancing these elements. Take fesenjan, the stew made with chicken, walnuts and pomegranates. Naz Deravian, an actress in Los Angeles and the author of the cookbook “Bottom of the Pot,” explains that walnuts are hot and pomegranates are cold, and so the dish is symmetrical.

“You always ate something because of something,” she said, referring to the I.T.M. health benefits of ingredients. “You couldn’t just eat something.”

Both Ms. Deravian and Mr. Sadr said that this way of eating is so ingrained, most Iranians don’t think about it — they just do it. Some may not even know that it’s connected to I.T.M.

During major illnesses, followers of I.T.M. believe that the body needs more hot than cold foods. To help his diverse customers through the coronavirus pandemic, Mr. Sadr has updated his Komaaj menu accordingly. He avoids salad and yogurt, both cold foods, but uses more ginger, which is a warm food, and good for coughs and sore throats, too.

He sprinkles nigella seeds over rice to boost immunity and overall health, and although chickpeas aren’t big in Northern Iran, he adds them to stews because they are thought to be good for chest pain. His herbal tea blend is complimentary with every meal ordered; it includes hollyhock and borage flower, which is said to have anti-inflammatory properties and work as a sleep aid.

On Aug. 22, Komaaj Kitchen at the Laundry finally opened. And Mr. Sadr has signed on to co-teach a remote course on Iranian cuisine for Stanford University’s Iranian studies program. He credits foraging and his lab for helping him through the dark days of the pandemic.

“Focusing on nature, touching the ingredients,” he said. “It helps me feel better, in the moment and not thinking about the future.”