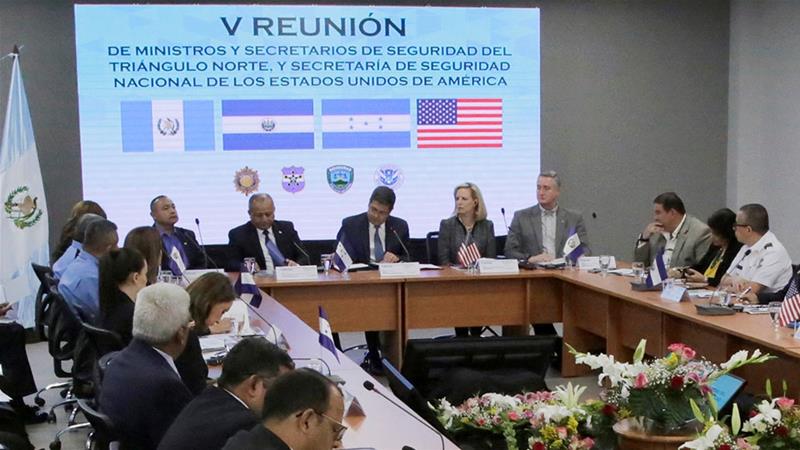 Guatemala City – Central American and Mexican activists are questioning their governments’ focus on security to address migration following meetings this week with US Secretary of Homeland Security Kirstjen Nielsen.

Nielsen met Mexican officials on Tuesday and attended a summit on Wednesday in Honduras with security ministers from Honduras, Guatemala and El Salvador. The meetings dealt with border security and the ongoing exodus of Central American migrants and asylum seekers.

The summit in Honduras ended with the signing of a regional memorandum of cooperation between the three Central American countries and the United States. According to the Department of Homeland Security, the memorandum “aims to better synchronise cooperation between the countries in order to bolster border security, prevent the formation of new migrant caravans, and address the root causes of the migration crisis”.

In a series of tweets, Nielsen described the memorandum as a “first-ever regional compact” and “a HISTORIC agreement to confront the root causes of the crisis on our border”.

The sole focus of the memorandum, however, is security cooperation in four areas: human trafficking and smuggling; organised crime and gangs; intelligence sharing; and border security. It is a non-binding document that essentially entails a commitment to continue ongoing talks and cooperation efforts.

Addressing the factors behind migration from a security perspective is questionable, says Iduvina Hernandez, director of the Association for the Study and Promotion of Security in Democracy, a Guatemalan non-governmental organisation.

“It is accepted up to a certain point that insecurity and violence are a factor in driving certain populations to migrate,” Hernandez told Al Jazeera.

“The problem is standardising the approach to the origins of migration and instituting policies only on that basis,” she said.

The approach also ignores the historical and structural foundations behind the insecurity and violence plaguing the region, according to Hernandez.

“They have their point of departure in structural problems linked to inequality and linked to the issue of corruption,” she said. “In the case of Guatemala, it’s a framework of corruption that has completely coopted the state.”

The Guatemalan Ministry of the Interior, which includes the national police force, is a case in point. Headed by Enrique Degenhart, who sat next to Nielsen during the recent summit in Honduras, the ministry has been embroiled in scandals for years.

Degenhart’s initial vice minister, Kamilo Rivera, is accused of participating in torture and extrajudicial execution ring run from within the ministry in the past and is now a fugitive from justice. Mauricio Lopez Bonilla, Degenhart’s predecessor, is on trial in Guatemala for corruption and has also been indicted in the US on drug trafficking and weapons charges.

Jeep J8 vehicles donated for border region counter-narcotics task forces were deployed in August 2018 to the streets around the offices of a UN-backed anti-corruption commission, generating alarm and condemnations of intimidation and misuse.

Guatemalan President Jimmy Morales, his relatives, and his political party had all come under investigation for corruption, and his attacks on the anti-corruption commission sparked a constitutional crisis that continues to fester.

Along with its suspension of aid to the inter-agency task forces, the US Department of Defense is also evaluating other transfers to Guatemala on a case-by-case basis. 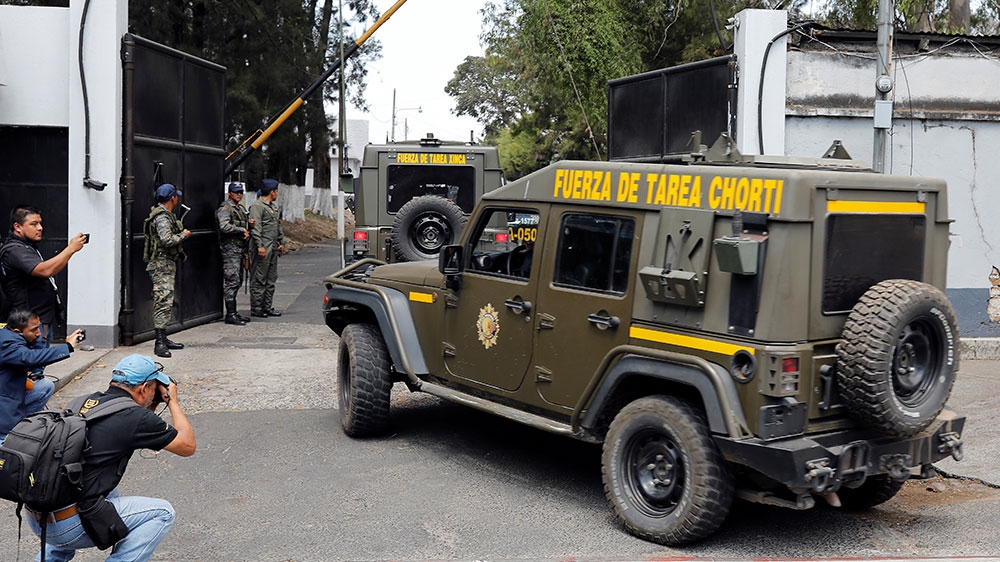 “The Guatemalan government is a partner and supporter of US security efforts in the region. However, the repeated misuse of US-provided military vehicles has necessitated a review of support to security cooperation programmes,” Michael told Al Jazeera.

One day after the March 14 announcement, more than 130 donated Jeep J8s began arriving at the air force base grounds in the capital city’s airport area, where they were lined up in front of a hangar used by the US.

In response to the criticism earlier this year, Guatemala’s secretary of state intelligence had offered to drop the Jeeps off in front of the US embassy and another defiant offer to return the donated vehicles seemed imminent. But after days of silence, the Guatemalan government claimed the Jeeps had been recalled for mechanical review and deployed them back days later.

“It is very likely that that absurd action of positioning all the Jeeps in front of the US hangar will also have consequences down the line,” said Hernandez.

Concerns about US security aid to Central American security forces goes far beyond the misuse of donated vehicles, however. State violence, extrajudicial killings, and repression have long been issues in the region, and ongoing abuses in Honduras have been of particular concern in recent years.

Democratic Congresswoman Norma Torres criticised the memorandum in a statement on Thursday, calling it a “misguided agreement” and highlighting the involvement of security forces with drug trafficking and organised crime.

“Far too many Central Americans have already suffered at the hands of corrupt and abusive security forces; they are demanding justice, not a blank check for soldiers and police,” wrote Torres.

Also on Thursday, Democratic Congressman Hank Johnson and his colleagues reintroduced the Berta Caceres Human Rights in Honduras Act. Named after a prominent Honduran indigenous rights and social movement activist murdered in 2016, the bill would place further restrictions and conditions on US aid to Honduran security forces.

“For years, members of the Honduras police and military have engaged in corrupt practices and gross human rights abuses without consequence. By limiting funding, we have the opportunity to force the Honduran government to investigate and prosecute these crimes,” Johnson said on Thursday in a statement.

Over the course of the past five months, Al Jazeera has spoken with many Hondurans who cited targeted repression and violence by state forces as their reason for fleeing north, though poverty, unemployment, and gang violence are more often cited. Individuals’ reasons vary, as does whether or not they travel in visible caravan groups, but either way, the exodus continues.

Mexican Secretary of the Interior Olga Sanchez said on Wednesday that Mexico is expecting a “mother of all caravans” from Honduras that could include as many as 20,000 people. Her comments came on the heels of a meeting on Tuesday with Nielsen.

Announcements for a Honduran caravan leaving Saturday from San Pedro Sula have been circulating on social media, but the source of Sanchez’s dubious claims concerning its size is unclear. Honduran Deputy Foreign Affairs Minister Nelly Jerez contested the claim.

“Intelligence forces, not just those from Honduras but also the ones that were here meeting with secretary Nielsen in a Northern Triangle meeting we had in our country, none of us has any information about the formation of a mass departure or mobilisation of people,” Jerez said on Thursday in an interview with Mexican newspaper El Sol de Mexico.

“The only certainty is that after the meeting with Nielsen, the Mexican government put forward the ‘mother of all caravans’ idea in its discourse to justify the US mandated containment,” the group said on Thursday in a public statement.

Sanchez also announced the Mexican government was sending federal police and other personnel to set up immigration checkpoints in southern Mexico, where a caravan of some 2,500 people, most of them Central Americans, has been gradually advancing northward this week.

Trump threatens to close the border

On Thursday, he threatened to close the southern border in a tweet, saying “Mexico is doing NOTHING to help stop the flow of illegal immigrants to our Country”.

He added, “Likewise Honduras, Guatemala and El Salvador have taken our money for years, and do Nothing”.

Trump has made the threat several times before, but has never acted. On Friday, he repeated the threat, however, saying he would close the border next week if “Mexico doesn’t immediately stop ALL illegal immigration coming into the United States throug (sic) our Southern Border”. 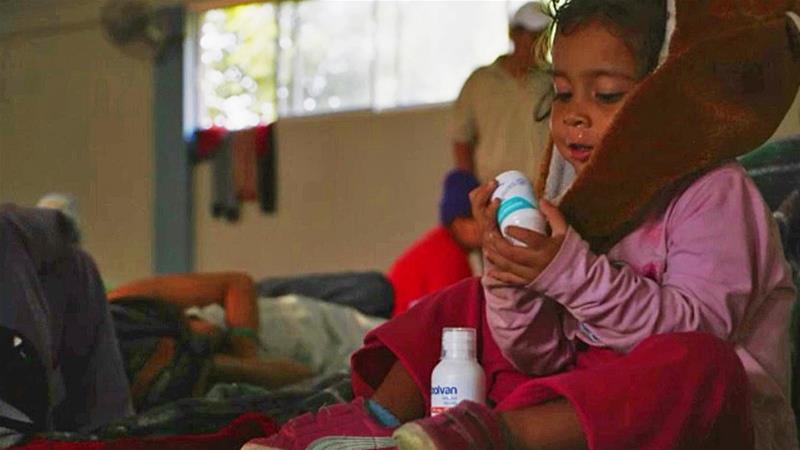 Walk in their Shoes