Every day the scene outside the British evacuation camp changes, every day it seems to get worse and this day there is a new sense of desperation.

Collectively I think the thousands queuing outside in burning temperatures know that the clock is ticking on how long this airlift will go on for.

Nobody is saying it, but you can feel it.

I’ve had tears in my eyes most of this dreadful day. The narrow road that passes the compound, so often jammed with people right up to the doors of the entrance, is now blocked by two shipping containers.

It means that there is at least some breathing space for the soldiers to attempt to process people – although it’s still chaotic.

Beyond the containers and beyond a line of paratroopers standing behind riot shields, it is quite simply horrendous.

Thousands, maybe tens of thousands, crushed as far as the eye can see.

At the front, Taliban militants beat Afghans with canes. 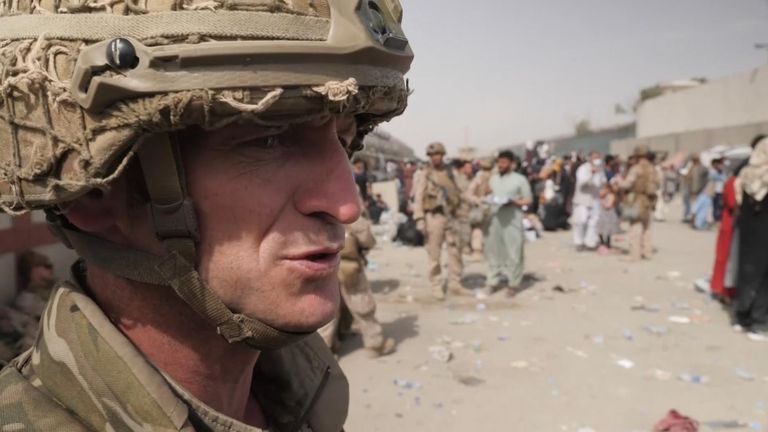 I’ve seen many bad things, but right now I can’t think of anything worse.

It’s hard to put into words how desperate this is – but most of the people I have seen over the barricade will not get through.

Sergeant Major Gaz Mcmahon has a British man’s passports – he clambers on to the shipping containers and calls him forward. A Talib fighter lets him through, the sergeant major passes the passports back and tells him to wait.

The containers have been put on the road to keep the gates of the British compound clear, they’re trying to funnel people through, and even British passport holders wait their turn.

All the time soldiers are called up to reinforce the human wall beyond.

On this side of the containers, it’s better, but not by much. Again, thousands penned in as the identification process goes on.

Outside the compound, British and American troops are now working together trying to differentiate the countries the evacuees should be going to.

It’s organised, but there are so many people, it’s an almost impossible task. I asked Sgt Maj Mcmahon if the whole experience has been tough on his men, he lets out a deep breath, shakes his head and says yes.

I said to him it appears to ebb and flow, sometimes it’s quiet, most of the time it’s pandemonium.

“It’s often calm but then it gets very hot, and the people who cause the most trouble and agitate the crowd are probably the ones who don’t have the right paperwork,” he replied.

“We’re not gonna be here forever.” 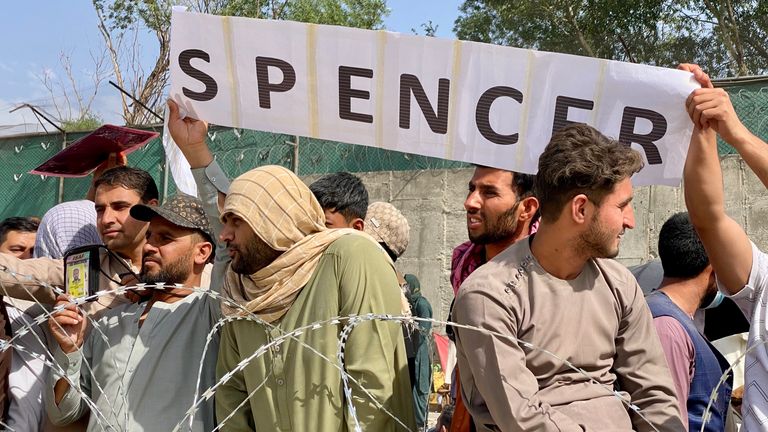 In the crowd we spot an Afghan man holding a banner with the name “Spencer” on it. I asked him who Spencer was.

He said he’d worked for the Americans for five years, and that “Spencer” was the military contact who had vouched for him.

He told us he was looking for Spencer, but he wasn’t sure if Spencer had come – or ever would.

He said: “Spencer is someone who’s supposed to get here and help us out. We’ve been in contact… but this is crazy, no-one is helping and I don’t know – if this keeps going, no-one will get help, we are requesting the government to fix this.” It’s hot, blisteringly hot. There are women and children everywhere you look. We watch on as British soldiers spot a baby in danger, they take control.

With a family in tow they make their way through to the British compound.

These are combat soldiers remember, but they also care about what’s happening to the people here.

Over the heads of the crowds of the evacuees, another transporter plane takes off. The sound is deafening, everyone looks up.

That’s what they’re here for – the flight to safety.

And in the midst of all this, sometimes, just sometimes, you see joy breaking out. Wahid Zahid and his family are going to the UK – it’s been agreed.

He was a British military interpreter in Helmand Province, and tells us he got the call last night. He came straight to the airport with his wife and children.

He told us this is a happy day for him and his family.

He said: “I’m going to go to Britain, this is my first trip to Britain.”

“It was very scary, like a ‘zombieland’,” he told me, describing the scenes beyond the containers. He can’t wait to get to Britain, and wants his children to grow to be engineers and doctors “to serve the Afghanistan people and also the British”.

Time is running out for this evacuation there is no doubting that – it’s just a matter of how long.

Not everyone who should go will go. The majority in the streets outside the container barricade will not.

Very soon they’re on their own.