The United Nations is seeking a record $5bn (£3.7bn) in aid for Afghanistan this year to help protect the country’s future after the Taliban’s seizure of power.

The appeal includes $4.4bn (£3.3bn) in humanitarian aid alone which amounts to nearly a quarter of Afghanistan’s GDP and is triple the figure it received in 2021.

Announcing the appeal on Tuesday, UN aid chief Martin Griffiths said the huge sum would be an “absolutely essential stop-gap measure” to help the country after the withdrawal of foreign aid last year following the Taliban victory in August which resulted in Afghanistan’s economy teetering on the brink of collapse.

He said: “This is a stop-gap, an absolutely essential stop-gap measure that we are putting in front of the international community today. 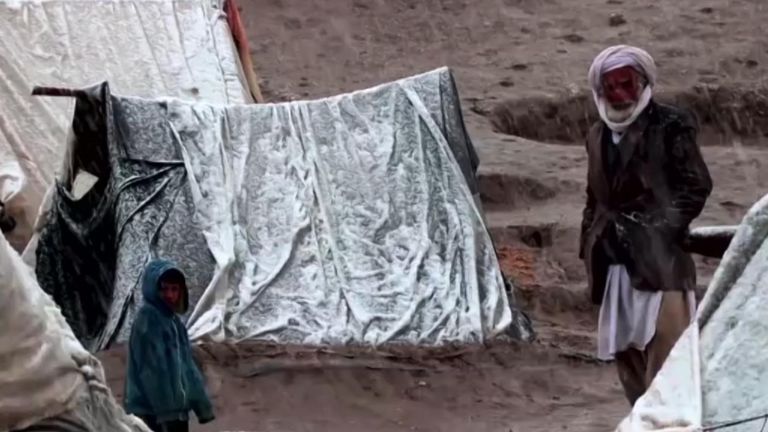 “Without this being funded there won’t be a future, we need this to be done otherwise there will be outflow, there will be suffering.”

Mr Griffiths, who has been meeting with Taliban officials, added the humanitarian plan had been “carefully calibrated” so that aid will go directly to people in need and not to authorities.

Western sanctions aimed at the Taliban also blocked the passage of basic supplies of food and medicine, although this has since eased after exemptions were passed by the UN.

Read more from Sky News:
Baby who went missing after being handed to US soldier over Kabul airport wall reunited with family
Taliban says women should not make long taxi journeys without male chaperone Filippo Grandi, UN High Commissioner for Refugees, said that improved security now meant there was an opportunity to help millions of people who were displaced by the long conflict to head back to their homes safely.

He added that since the Taliban seized power, 170,000 had returned already.

Mr Grandi said: “The conflict between the Taliban and the previous government is over and that has opened up some space of security which I think we need to take advantage of.

“But to do that we need those resources that are part of this appeal.”