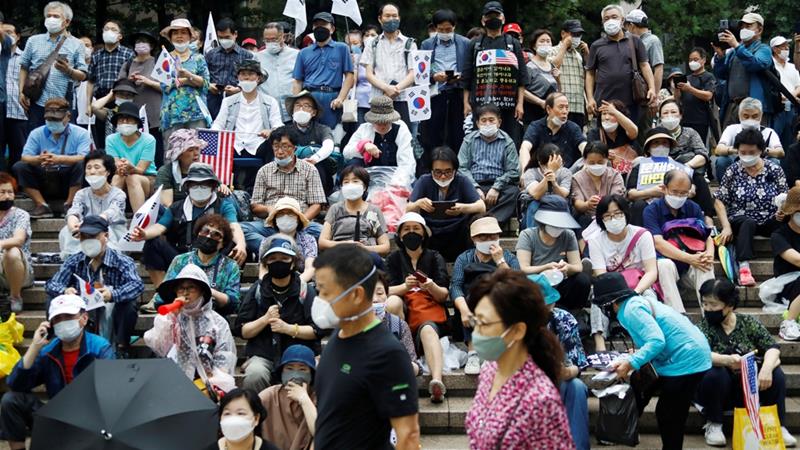 A spike in new coronavirus cases in South Korea prompted authorities to reimpose tighter social distancing curbs in Seoul but that did not stop thousands of demonstrators from protesting against President Moon Jae-in’s policies on Saturday.

Municipal officials in Seoul had sought to forbid the slew of rallies planned by conservative activist and Christian groups for a holiday celebrating the 75th anniversary of the nation’s liberation from Japanese colonial rule at the end of World War II.

But a court allowed some of them to go on, citing civil liberties after protesters challenged the city’s administrative order banning the gatherings.

The demonstrators, many of them wearing masks and carrying the South Korean flag, paraded through rain near Seoul’s presidential palace, calling for President Moon to step down over what they see as policy failures, kowtowing to nuclear-armed North Korea and election corruption.

Some protesters scuffled with police officers who closely followed the marchers, but there were no immediate reports of major clashes or injuries.

For the second day in a row in over four months, South Korea reported a sudden jump in locally transmitted cases, the Korea Centers for Disease Control and Prevention (KCDC) said.

The KCDC reported 166 new cases as of Friday, of which 155 were domestic, prompting authorities to re-introduce anti-virus measures as they worried about the spectre of a fresh wave of the disease.

The new cases took South Korea’s tally to 15,039 with 305 deaths by Friday midnight. The recent spike in infections are emerging in multiple clusters, including church gatherings and restaurants.