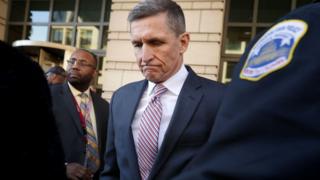 A US appeals court has agreed to re-hear arguments over efforts to drop charges against ex-National Security Adviser Michael Flynn, one of several Trump associates convicted of lying.

Flynn, a former three-star US general, was the highest ranking official snared by the special counsel inquiry into Russian meddling in the 2016 election.

A federal court moved to dismiss the charges last month.

An oral argument in the case on will be held on 11 August.

Flynn was forced to resign early in the Trump presidency for lying to Vice-President Mike Pence about his contacts with Russian government officials.

The surprise 2-1 ruling to drop the case was made by the US Circuit Court of Appeals for the District of Columbia on 24 June, after Flynn pleaded guilty to lying to FBI investigators about his conversations with the Russian ambassador to Washington.

It followed a highly criticised request from the Department of Justice (DOJ) to drop the case and an attempt by Flynn to change his guilty plea.

The ruling ordered the judge overseeing the Flynn case to immediately drop all charges and cease his scrutiny of the DOJ decision to drop the long-running prosecution.

President Trump cheered the “great” ruling in a tweet and called for fired FBI director James Comey to apologise to him.

However, US District Judge Emmet Sullivan asked the full court to reconsider the ruling, saying that dropping the case was unprecedented and had to be carefully scrutinized.

The US Court of Appeals for the District of Columbia Circuit agreed on Thursday to hold an oral argument on the case in less than two weeks.

Democrats have said the Flynn case is an example of Attorney General William Barr playing a role in high-profile legal and political battles involving President Trump.