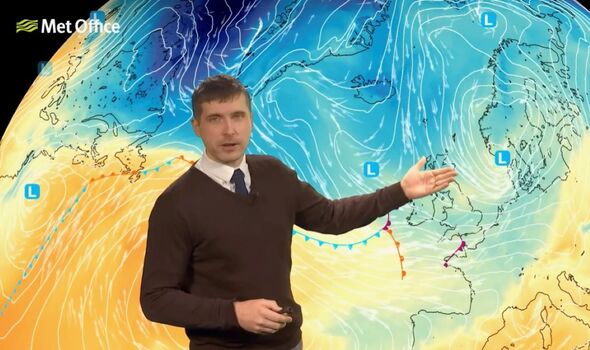 Five days of freezing temperatures, ice, and Polar downpours threatened disruption on roads, railways and to airlines, while the elderly and vulnerable are urged to be ready for the cold.

Two storms churning off the south coast of Britain–Gerard and Fien­–named by the French and Spanish Meteorological services will drive the assault.

The UK Health Security Agency (UKHSA) has a level-2 “Alert and Readiness” health advisory in force until Thursday.

Weather forecasters warn the freezing blast will dig in through the week as the nation braces for the first snow deluge of 2023.

Exacta Weather’s James Madden said: “A heavy band of snow will work its way across northern England and Wales through the early hours of Monday.

“As the day goes on, we are now expecting to see several hours of snowfall, which could arrive anywhere.

“Southern Britain, including the capital will be at risk of snow through the day.”

Sub-zero temperatures will dig in through the week as the UK is engulfed in a bone-numbing plume of Polar air.

Heavy snow will hit swathes of the country again on Tuesday, and through the week prompting four days of Met Office weather warnings.

Mr Madden said: “Tuesday will see a continuation of heavy snow showers, which will be most likely around coastal areas, although they will push inland, including to southern Britain and the southwest.

“The risk of snow will persist through the week.”

The Met Office has issued warnings for ice and up to six inches of snow across Scotland, which could fall in just hours.

A separate warning is in force for snow today across southern Britain, including London, where up to an inch could settle.

The region is also on alert for heavy rain which Government forecasters will turn wintry as temperatures plummet.

Snow and ice warnings remain in force across Scotland until mid-week with severe weather threatening travel disruption, delays on roads, and the risk of injury from slips and falls.

Met Office meteorologist Alex Burkill said: “It’s cold out there and with that we do have some wintry hazards with sleet and snow for quite a few places over the next few days.

“The reason for the change to cold is an area of low pressure just to the east of us allowing cold Arctic air to plunge in from the north.

“We have a number of warnings in force, and we are going to see some wintry showers feeding in from the north for a good few days.”

Temperatures could drop to minus double figures over lying snow and widely below freezing, he warned.

He said: “There will be some difficult conditions if you are taking to the roads.

“Temperatures into Monday morning are going to be on the very low side, and where there is lying snow temperatures could get into negative double figures.

“Showers will continue to feed in from the north, and they will most frequent across Scotland.”

Actual air temperatures will plunge to -10C in Scotland although some forecasters warn they could nudge -15C.

A wall of snow bearing down from the Polar circle will plough into Scotland today while the entire nation braces for wintry downpours.

Jim Dale, meteorologist for British Weather Services, said: “This will be similar to the cold snap we saw before Christmas, and although it is expected to be less significant, it still has the potential to cause some disruption with the possibility of snow falling widely before the end of the week.

“Temperatures could hit -15C in exposed regions, but widely there is the potential for lows of -6C or -7C.

“The lowest temperatures will be overnight this week, but even during the day there is the potential for temperatures to hover at freezing or below.”

Foul weather at the start of the week will be driven by two European storms pulling in bands of rain which will turn to snow.

Netweather meteorologist Jo Farrow said: “Two low pressures, which will move just to the south of Britain in the next few days, have been named by France and Spain. With a colder flow from the north, any UK precipitation linked to these could include snow.

“Firstly, (Tempête) Gerard, named by Meteo France will deepen in the English Channel on Sunday night.