Much of South East England is currently seeing heavy rainfall after a yellow Met Office warning. This poses a flood risk as water cannot be absorbed by ground dried by consecutive weeks of record-breaking high temperatures. Rainy weather is set to be interrupted during a short but dry, warm and sunny spell blessing the bank holiday weekend, according to forecasters.

The transition will start after Friday when clouds and downpours across western regions move slowly eastwards, bringing showers through the day.

Northwest Scotland, as well as many central and eastern areas, will remain dry on that day, predictions indicate.

Then, from Saturday, sunny spells will start warming up the atmosphere with dry periods, though light rain could be seen at times in the far northwest.

According to the Met Office, it is the Azores High that will move in over the weekend, allowing for lengthy spells of dry fine weather for many.

Met Office Meteorologist Aidan McGivern, said: “The Azores are a group of islands in the mid-Atlantic. Semi-Permanent high pressure sits here throughout much of the year. 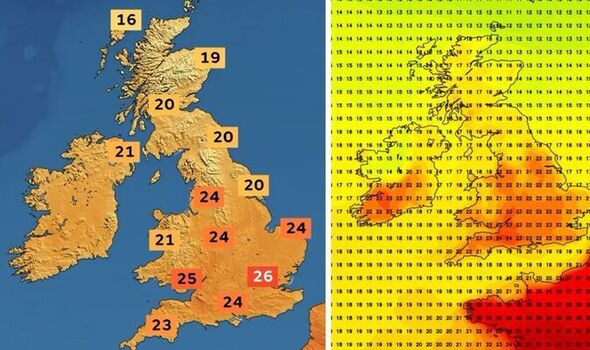 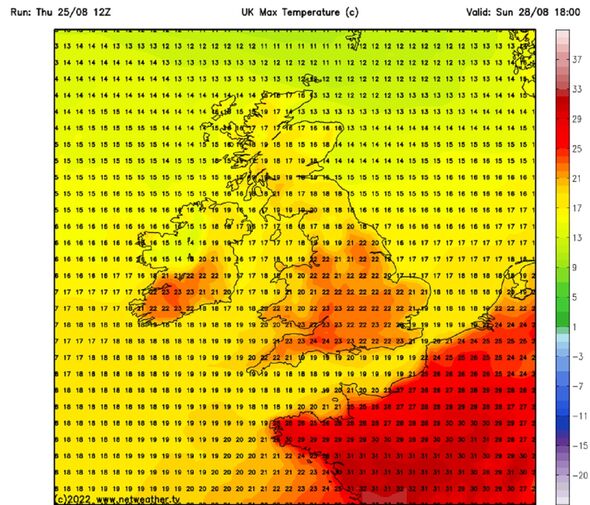 “But what’s been happening through this year so far and especially during the summer, is high pressure from the Azores keeps extending across the UK, hence the warm summer and the very dry summer that we’ve had. And that repeating pattern repeats again this weekend.”

Temperatures could reach up to 26C degrees in London, 24C in Brighton, 25C in Cardiff, 24C in Manchester, 20C in Edinburgh and 19C in Aberdeen.

Mr McGivern added: “There’s also an area of low pressure which will likely bring some wetter weather for a time, later Saturday into Sunday to the northwest, mainly Northern Ireland, western Scotland, and then clearing from the far north of Scotland during Monday.”

But as people return to their routines after the bank holiday weekend, more thunderstorms and heavy rain are on the way. 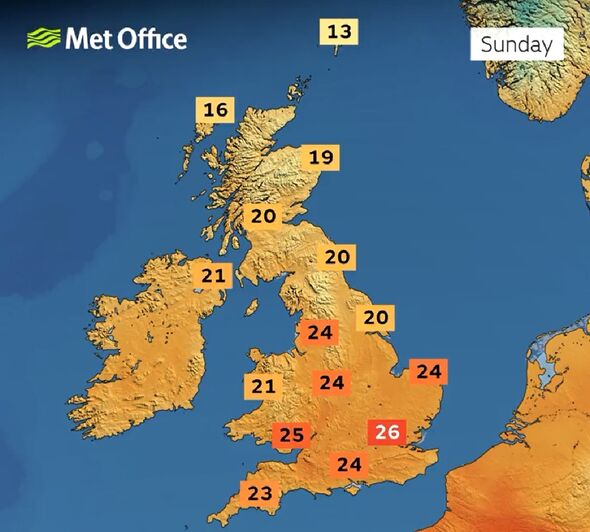 The Met Office forecast for the week following the bank holiday reads: “There is the possibility of rain in the west and northwest at times, and risk of potentially thundery showers in the south and east.

“Winds returning to generally light. The end of this period may be characterised by a shift to more unsettled weather, most likely in north and west, while the south and east see the most of any dry weather.

“Temperatures remaining near average or warm throughout this period, though potentially rather cool in the east at first.”

More unsettled weather is predicted for the weekend of September 10-11, particularly in the north and west of the country.

South and East England are likely to remain dry and more pleasant during this period.