BBC Weather forecaster Stav Danaos said western Europe and central Europe will see some of the most unsettled weather over the weekend. Heavy rain and strong winds are expected for these areas before the weather front moves further eastwards. Temperatures are expected to remain in the teens for parts of western Europe while eastern northern parts of the continent can expect temperatures above 20C despite the rainfall.

Mr Danaos said: “The weather across Europe this weekend will be mostly dominated by a really big area of low pressure.

“You can see it here swirling into the northwest of Europe and bringing the much cooler air down.

“There will be some heavy rain and pretty strong winds at times too and the whole thing will develop further and become larger as it pushes eastwards.”

The BBC Weather forecaster added that this unsettled weather starting in western and central Europe will spread further over the weekend. 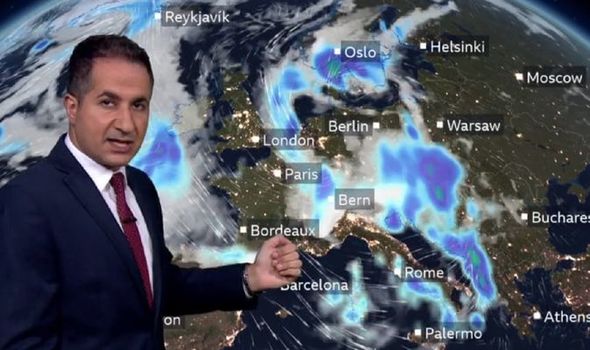 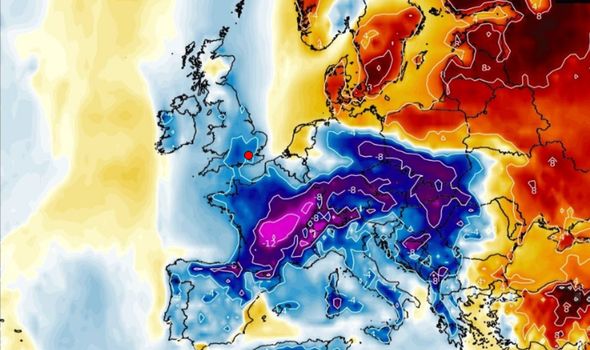 Mr Danaos said: “This weather front is going to bring unsettled weather across the central Mediterranean.

“There will be some heavy rain pushing into Greece and the Balkans too.

“The very eastern Mediterranean will stay mostly dry, sunny and hot through the weekend.

“We are also scooping up some warm air across the eastern side of the area of low pressure so it will be in the low 20s in the north eastern parts of Europe.” 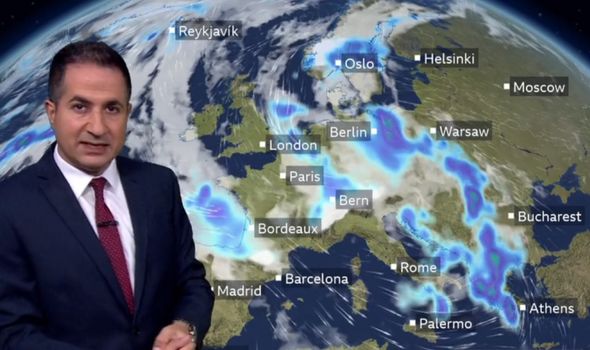 Mr Danaos also claimed there could be some outbreaks of snow over high grounds over the weekend due to the new weather front.

He said: “We are seeing an increasing amount of snow across the Alps and the Pyrenees.

“This is due to the colder air in the deep south areas, as far south as central Italy.

“It looks very wet across much of southern Italy on Sunday as well.” 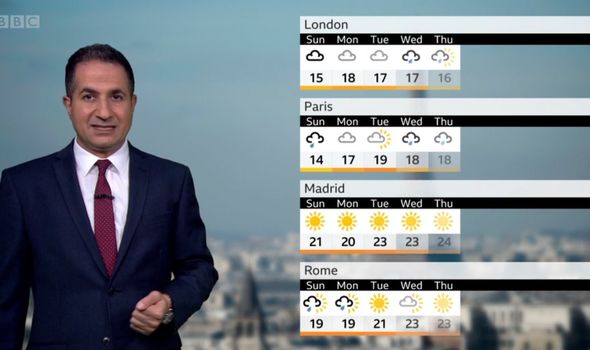 The BBC Weather forecaster closed by noting the temperatures across the continent over the next few days and into the new week.

London and Paris can expect similar temperatures in the high teens with some cloudy weather with chances of rain.

Rome will be slightly warmer but can still expect significant rain over the weekend but less so in the new week.

Madrid will remain dry and warm for the next few days with temperatures remaining above 20C.