BBC Weather forecaster Carol Kirkwood insisted that it would remain murky and foggy with outbreaks of rain on Thursday and Friday. As we move into the weekend, however, she noted that it will become increasingly wetter for many parts of the country. These showers set to grip the nation will also force the temperature down for many, moving away from the highs of 20C.

Carol Kirkwood said: “On Thursday high pressure is starting to take charge but there is barely an isobar in the charts.

“If you do catch a shower today it will be slow-moving.

“Merky conditions, some mist and fog today adjacent to the Irish sea coastline.

“We have also got some across the channel islands, that could lap across some southeastern counties of England. 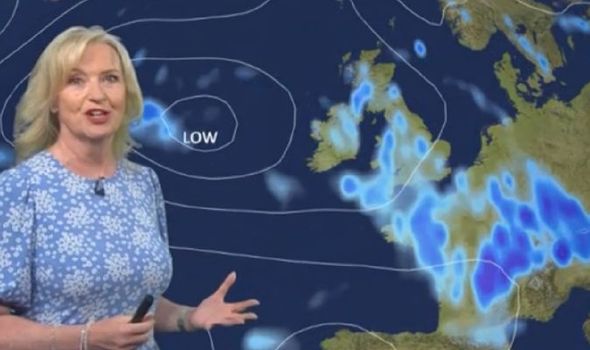 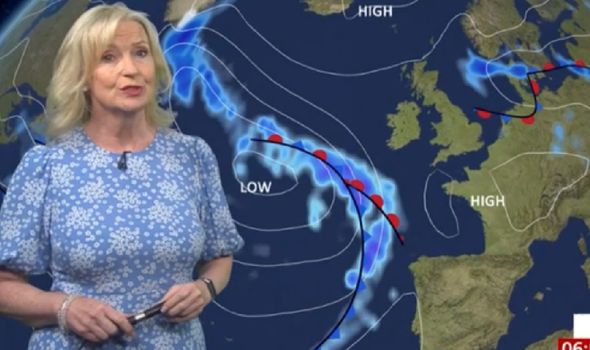 “In between, there will be some sunshine and showers.”

The BBC weather forecaster noted that the temperature will be relatively warm across the UK today with highs of 22C.

Ms Kirkwood also commented on the chance of rain at the Wimbledon tennis championships. 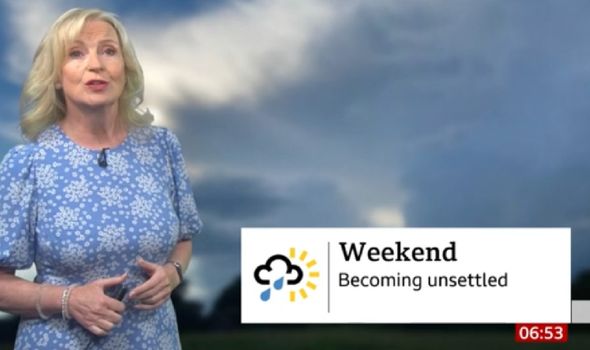 She said: “If you are heading to Wimbledon today there is a ten percent chance of a shower today.

“That increases to 20-30 percent but then it increases again as we head on through Saturday.”

Looking ahead to the weekend Ms Kirkwood warned of more rain to strike the UK.

She said: “As we go through Friday afternoon and evening we will see some heavier showers in north England.

“We also see the first signs of something coming in from the Atlantic, later on.

“For the weekend, it is a much more unsettled one.

“On Saturday we are likely to see some widespread showers coming across the south of England.

“They will push northeastwards through the course of the day.

“When we look at Sunday it is also looking like quite a showery picture.

“As a result of this, it does mean temperatures won’t be quite as high as they should be.”