The UK is bracing itself for freezing rain and snowfall for what could be the last day of the the country’s cold snap. The latest BBC weather forecast shows milder air moving into the UK throughout today and into next week. Temperatures could jump 10C in the next 24 hours as much of the country returns to double-figures.

BBC meteorologist Sarah Keith-Lucas told BBC Breakfast: “The snow is going to be easing away over the next couple days.

“We are replacing ice and snow with wind and rain. It is a cold start to the day today, we have some subzero temperatures particularly in the north and east.

“But, things are going to turn milder gradually through the course of today and the week ahead.

“We have a windy day today wherever you are, making it feel very bitter first things this morning.” 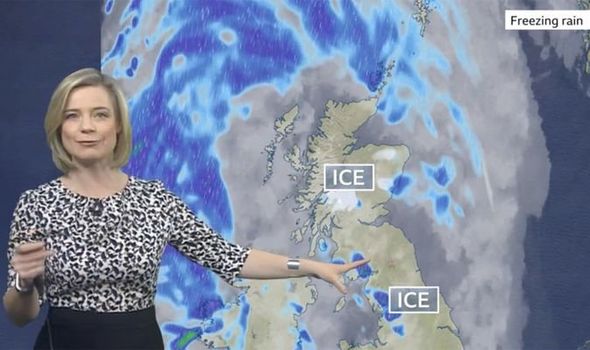 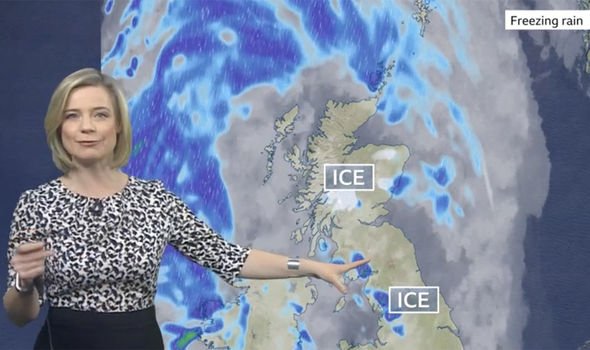 She continued: “We have some snowfall in Scotland this morning.

“Elsewhere, some rain showers will be moving in from the west and meeting that cold air siting above the UK at the moment.

“This could see some freezing rain, which can create really treacherous icy conditions across Scotland and northern England.

“The wind is very noticeable out there, with up to 70mph gusts particularly through the Irish Sea.

“Temperatures vary from east to west, so we are seeing 12C in Belfast while only 4C across eastern areas. 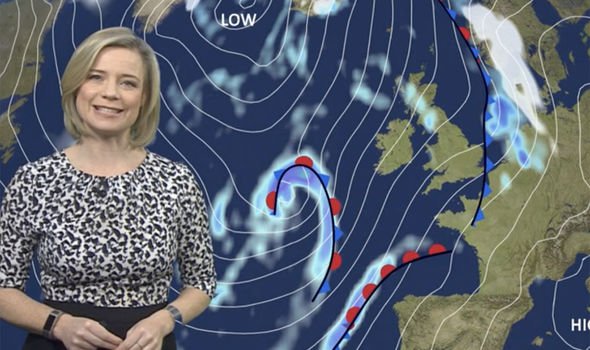 “Overnight temperatures will range between 4C to 9C, which means tonight’s overnight lows are higher than the top temperatures we have been seeing recently.

“Tomorrow and into next week we will continue to see milder air moving in from a south-westerly direction.

“Temperatures in the warmest spots, in London for instance, will be up to 13C, but fairly widely we are back into double figure.”

The forecast means that parts of the country could see more than a 10C jump in temperature within 24 hours, with the mercury  in London soaring from 2C today to 13C by tomorrow. 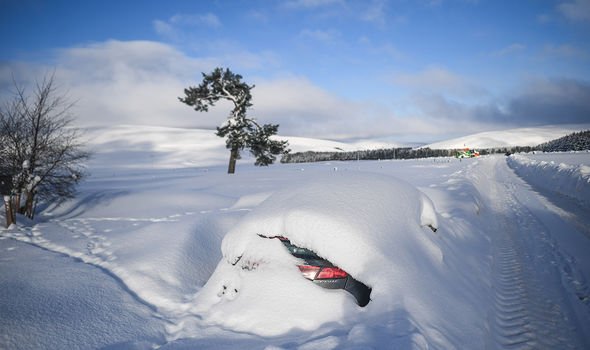 Ms Keith-Lucas added: “That is the pattern for the rest of the week ahead – a much much milder weather system but certainly unsettled with outbreaks of rain and a slight dip in temperatures on Thursday.”

He said: “It’s going to be a bitterly cold day. Certainly where you’ve got freezing rain and ice, combined with those strong winds.”

A yellow weather warning for ice is in place for most of Scotland, northern England and the Midlands until 9pm on Sunday.

A warning for wind for coastal areas in western Scotland and Northern Ireland’s east coast will be in place between 4am and midnight on Sunday.