After the deadly heatwave that reached a staggering 40.3C record in Coningsby and claimed at least 10 lives, Britain is now heading to much cooler temperatures with drops of 10 degrees in the coming days. Britons can heave a sigh of relief as the more hospitable temperatures will hover around 20 degrees, with showers, dry weather and sunshine expected across the country.

BBC’s Carol Kirkwood started by showing the extreme drop in temperatures from Tuesday – when the highest temperatures ever was recorded by the Met Office – to Wednesday, with some cities like Coningsby and London seeing a temperature drop of 13 degrees.

After the deadly heatwave, temperatures will keep going down with clouds, dry weather and some showers across the country.

She said: “The sunniest conditions are going to be in the West as high pressure tries to build in. But you’ve got this cold weather front dangling across parts of Northern England.” 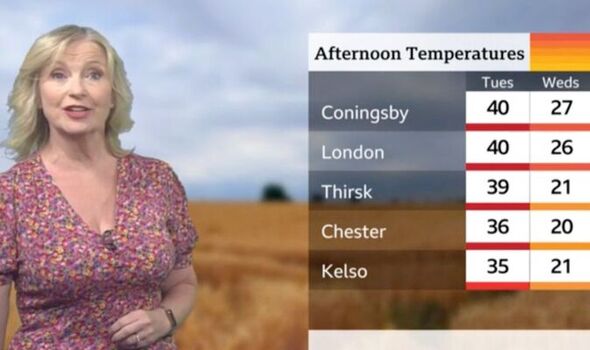 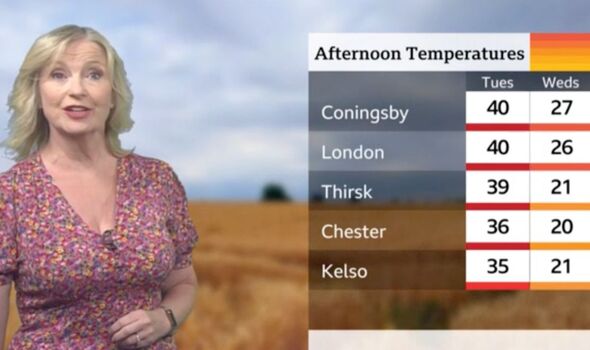 “So, here (in Northern England) especially we are prone to some of those showers,” Ms Kirkwood said.

“So, a lot of cloud today, in southeast Scotland and much of England, away from the southwest, where we will have sunshine. Also, some sunshine in South Wales, Northern Ireland and Scotland.”

To the relief of many Britons, Northern England will also see much-welcomed showers after the scorching heat.

She continued: “But we could see some of those showers this afternoon for example around the Lake District, across the Pennines into Northeast England.” 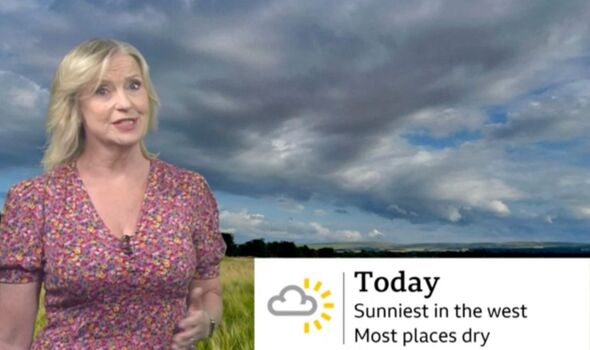 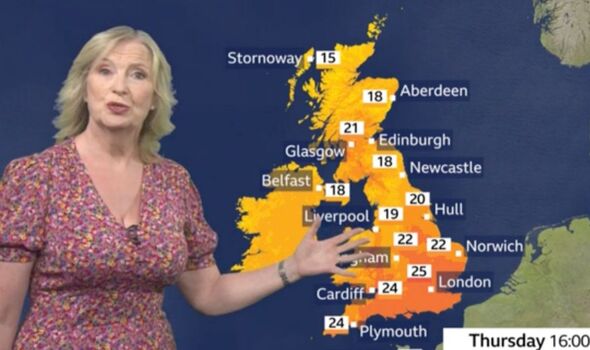 For Thursday, Ms Kirkwood said: “Temperatures are 12 to 25 degrees, so you just see they have slipped by a degree or so. As we head on through the evening, we could see some early evening brightness before the cloud builds once again and by the end of the night, we will see showers across the Central Belt, through the Pennines into Wales into the Southwest and also the Midlands.

“A warm night in the south with overnight lows are 16 or 17, but cooler as we push further north and west.”

Moving on to Friday, more showers are expected across the country with the heavy ones expected in Northern England, Wales and the Midlands that could prove to be thundery.

BBC’s Kirkwood said: “Also, looking at showers moving across the English Channel, potentially clipping the South Coast and the Channel Island. And tomorrow too, we’ve got an unsure breeze coming in along the North Sea coastline so here for you, it will be that bit cooler. But temperatures again slipping, looking at 22C as our top temperature.” 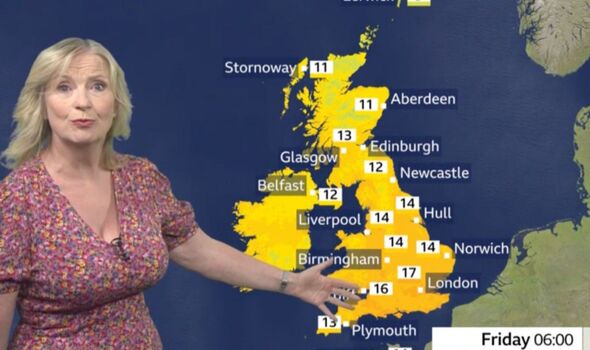 Moving onto Friday, Ms Kirkoow said Briton should expect “a bit of change in the weather. Low pressure starts to push away the high pressure and with these weather fronts, you can see it is going to turn more unsettled.”

On Saturday, showers will move north into Northern England, Wales and the Southwest, with windier weather conditions.

“It’s also going to be a windier day over the course of Saturday, especially with the exposure in the West, and the wind is changing direction,” she added.

“And we start to pull up one direction, south, so that means that the temperatures will start to rise again, especially in the southeast where on Sunday, we could hit 30 degrees.”