Ms Kirkwood said: “We’re looking at sunny spells, rain in the West later but we are starting with a fair bit of cloud in Eastern areas with just the odd shower.

“Now that’s going to move away, it will linger longest in East Anglia and the South East.

“But we’ll see a few holes, for most of us we’re looking at a dry day with some sunshine.

“Because the cloud is going to thicken out towards the West and then we’ll see the arrival of some rain. 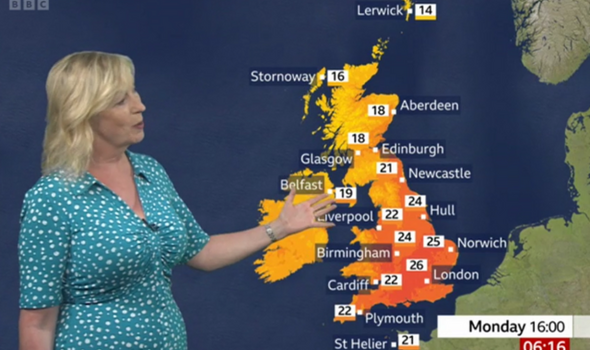 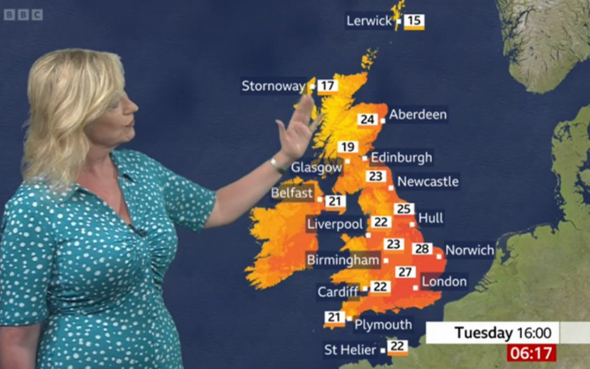 Ms Kirkwood added: “And the wind is also going to pick up to.

“A warm day 25C-27C degrees in East Anglia and the southeast.

“20C across parts of Northern Ireland and North East Scotland, 24C in Birmingham.

“Now as we head on into the evening and overnight period, watch how this rain moves quite swiftly across Northern areas.

Ms Kirkwood said: “Tails back across Eastern England into the Midlands and also Wales.

“And quite a lot of cloud around, a breezy night and also a humid night for many of us.

“It will be murk and mist around the southwest overnight and through tomorrow.

“Also across the Bristol Channel in South West Wales. 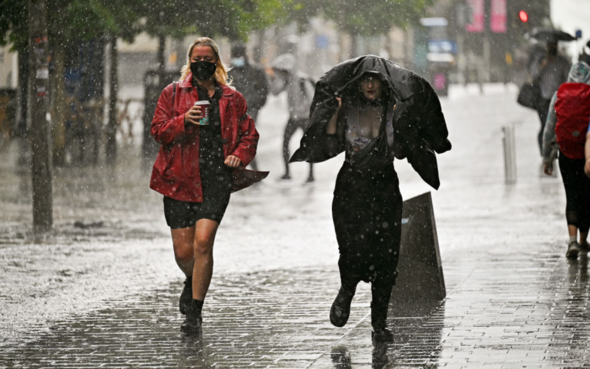 Ms Kirkwood added: “We’ll also have the dregs of that still producing some showers.

“To the South of that, we’ll see some sunshine, to the North of that a bit more cloud at times.

“Still fairly breezy, still feeling humid and our temperature range 15C in Lerwick, 24C in Aberdeen and 27C as we push down towards the South East.”