Home » World News » BBC Weather: Sunny spells in north but total washout for the south as UK gripped by storms

BBC Breakfast weather presenter Carol Kirkwood warned of a “north/south divide” in Britain’s weather on Monday. Speaking live from a sodden Wimbledon tennis championships in London, which starts today, Ms Kirkwood said low cloud and showers will swamp the south of England as an area of low pressure dominates. But northern areas will see calmer, sunnier and drier weather as high pressure will keep out the stormy weather.

She said: “In the north dry, sunny and warm in the south we do have some showers and rain.

“In the south we have got low pressure dominating the weather

“Whereas in the north we are looking at high pressure keeping things settled.

“Through the morning that will ease but it will only be replaced by some showers, some of which could be heavy.”

JUST IN Don’t do it! Boris warned retaliation against EU could DAMAGE global trade deal prospects 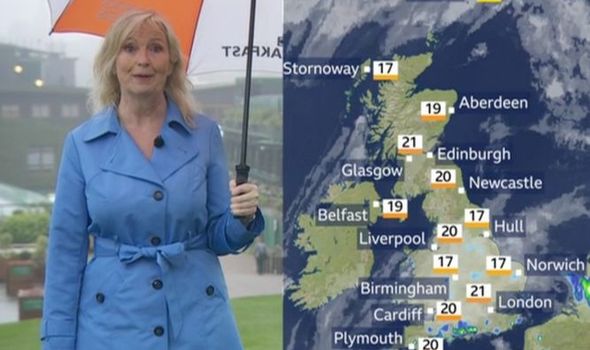 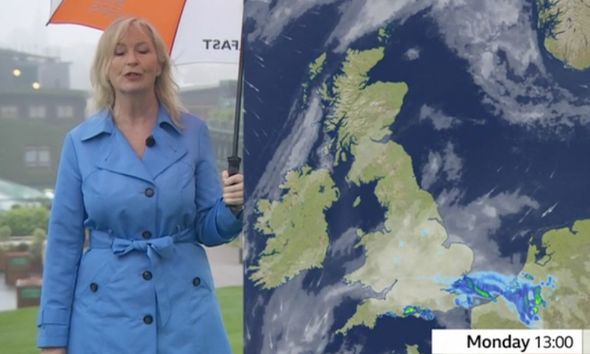 Monday will see highs of 21 degrees in London, 20 in Cardiff, 20 in Newcastle and 19 in Aberdeen.

Kirkwood added: “Through this evening and overnight for much of England and Wales there will be a lot of cloud, again there will be some showery outbreaks of rain.”

She explained Northern Ireland, Scotland and Cumbria will start to see some “clearer skies and mist” through the course of Tuesday morning.

For the south, the forecaster warned: “We are looking at a fair bit of cloud and also some showers on and off, some which could be heavy and thundery, particularly in the south east.” 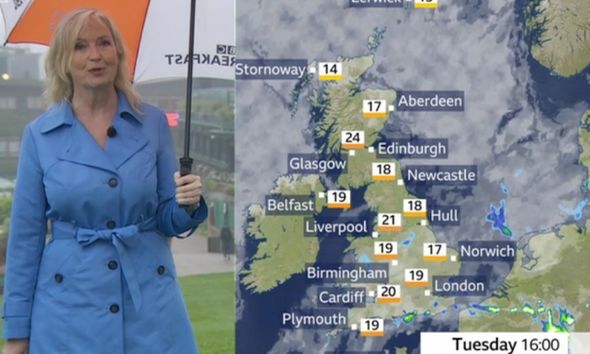 The weather presenter added: “As we head on into Wednesday we start off on a cloudy note.

“But it will brighten up especially in western areas where there will be fewer showers.”

Wednesday will see temperatures drop sightly to the mid teens across the country. 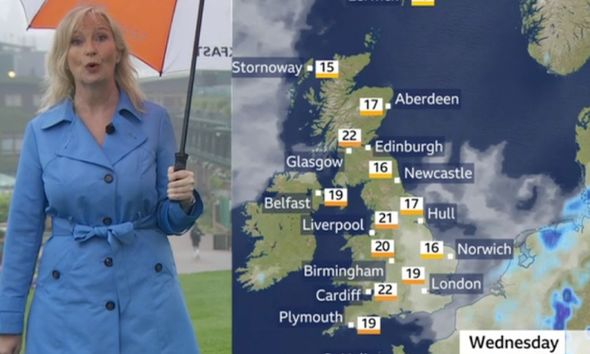 But she warned of more bad weather on the way for Britons as the weekend is not set to get better.

She concluded: “By the weekend we will have some Atlantic fronts coming in so that means it will again be unsettled.”